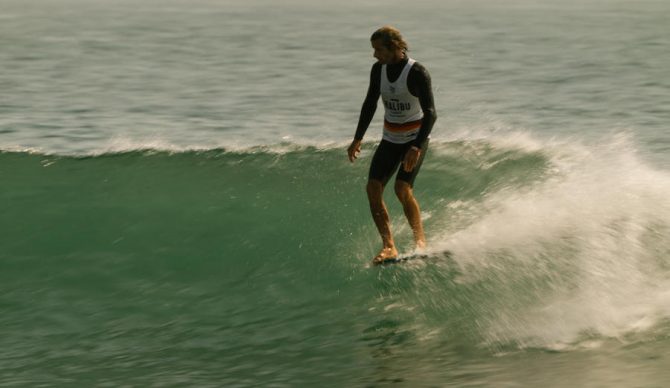 Joel Tudor, on the nose – while on his way to a third longboard world title. Photo Thomas Lodin//WSL

Some things were just meant to be. In picture-perfect, peeling Malibu waves, Joel Tudor and Honolua Blomfield each won their third longboard world titles. Honolua’s victory makes her the youngest surfer ever to win three titles, and Joel’s win at 45 makes him the oldest surfing world champion ever – in longboarding, shortboarding, or big wave. “The most proud thing of all of this is that I finally beat Kelly at something,” said Tudor as he savored his win on the beach between heats. “So remember that.”

He snagged that world title in his semi-final heat against Tony Silvagni, and ended up walking away with “all the marbles” (in the words of Kaipo Guerrero, no Squid Game reference intended), going on to take down Ben Skinner of the U.K. in the final.

Yesterday, the first day of the event, saw plenty of action and upsets, as the frontrunner on the men’s side – Edouard Delpero of France – fell in the elimination rounds to Jefson Silva and Rodrigo Sphaier, leaving things wide open. Harrison Roach of Australia emerged as the frontrunner going into today, but his semifinal loss to Ben Skinner essentially left the fate of the title in Joel’s hands, as he only needed to beat Silvagni to clinch, which he did marking a page for himself in competitive surfing’s now extensive history book.

Tudor won his first WSL event at age 15 and his first title in 1998. His second title came in 2004. After almost 20 years away from the world longboard tour (or any such iteration), Tudor’s triumphant return to competition started with an astonishing win at the Noosa Longboard Open in 2020, and culminated today in Malibu. 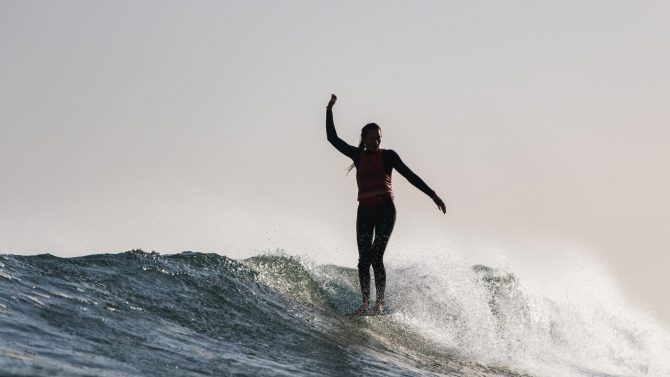 On the women’s side, Honolua was coming off a decisive win at the Cuervo Surf Ranch Classic, where she played with the man-made feature, logging (zero pun intended, seriously) a stunning switch-stance barrel, and seemed to be in near-perfect form ahead of Malibu. Which turned out to be necessary, as there were plenty of competitors in line to challenge her for the title. But alas, Honolua was able to clinch the title in her quarterfinal heat against Lindsay Steinriede with powerful carves and near-perfect noseriding.

“I feel amazing, I really didn’t expect this to happen,” said the 22-year-old during her post-heat interview. “I’m so grateful and thankful it did, it feels amazing to be the youngest three-time world longboard champion.”

After sealing the title in the quarterfinal, Honolua still had an event to finish. She made it through her semi-final heat against French youngster Zoe Grospiron, but then Alice Lemoigne, also hailing from France, laid it down against an exhausted-looking Blomfield, netting an 8.57 and a 7.93 to lift her above the world champion’s 6.60 and 6.00 to clinch her first event victory. Obviously it was all smiles and no ill-will from Honolua, as the Hawaiian competitor was the first to congratulate her good friend on her victory in the water, and help chair Alice up the beach. 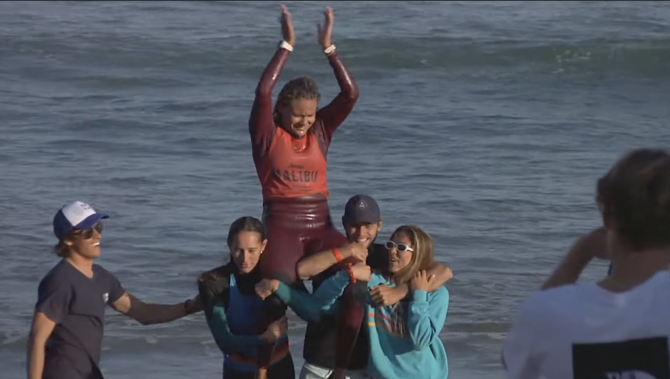 Coming out of a pandemic (we’re still living in), it was a monumental effort to finish a longboard tour at all this year. “This has been a couple-year project to get to this point,” tour director Devon Howard said calmly after. “The Championship Tour has their finals in really special places, and for us to have it at Malibu it feels like we’ve elevated the competition in being at the best longboard break in the world.”

The plan for next year includes a “three-event scenario” Devon said after, with a final again at Malibu, one event at the Surf Ranch, and another out in Hawaii with a location yet to be announced, most likely Queens Break at Waikiki according to the WSL.