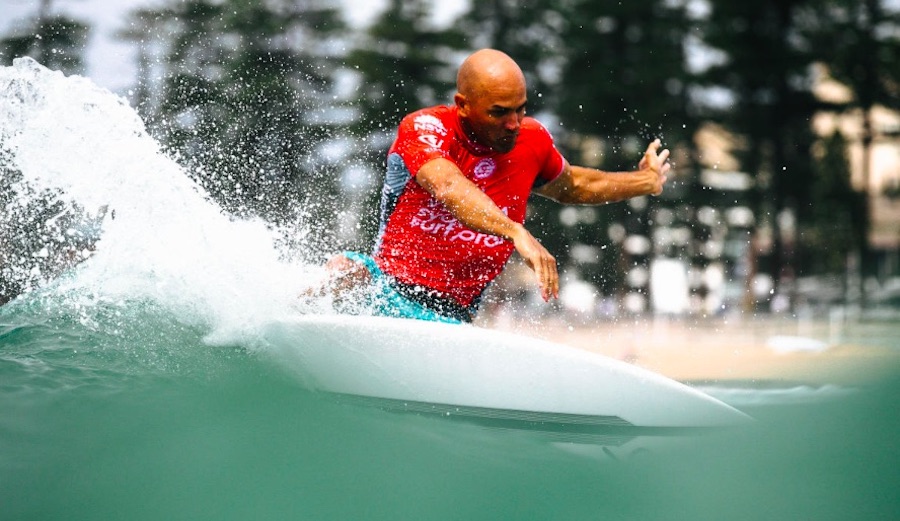 John John Florence’s likely exit from the remainder of the season may have just opened the door for Kelly Slater to fulfill his Olympic ambitions. Photo: Dunbar/WSL

On Monday evening, John John Florence took to Instagram to announce he’d be undergoing surgery on a ruptured ACL and likely be out the rest of the 2019 season (see the wave that took out Florence’s knee below). In addition to shaking up the world title race, the news has also shifted things a bit in the quest to represent the Stars and Bars in the 2020 Olympics.

If you’ll recall, 18 (10 male and eight female) of the 40 surfers that will compete on the Olympic stage will be decided by this year’s Championship Tour rankings. The process is all very convoluted, but for our purposes let’s just say that the top two American men on tour (including surfers from Hawaii) will most likely represent the United States in Japan next summer.

Until John John Florence’s recent re-injury, it looked all but certain the first slot was locked up, and the battle for the second one was a heated contest between Kolohe Andino, Conner Coffin, Kelly Slater, and Seth Moniz. An International Surfing Association announcement detailing the Championship Tour surfers invited to compete at this year’s ISA World Games confirmed as much. USA Surfing’s men’s team would be comprised of John John Florence, Kolohe Andino, and Conner Coffin, the ISA explained.

But, after Florence’s Monday announcement, USA Surfing has confirmed that Florence will no longer compete at the 2019 ISA World Games and that Kelly Slater has been invited to fill the newly-vacant slot – something he will likely do to remain Olympics eligible (according to the qualification scheme, surfers must compete at the 2019 or 2020 ISA Worlds, or both, if invited).

“Kelly was invited to participate once USA Surfing learned of the extent of John’s injury,” said USA Surfing in a statement.

“Kelly Slater – the greatest surfer of all time with 11 World Titles and the distinction of being the youngest and oldest World Champion in men’s history – is an incredible ambassador for surfing and our nation. We look forward to competing in Japan in September as we begin to build momentum for the Olympics in Tokyo next year,” explained USA Surfing CEO Greg Cruse.

So, in addition to Florence’s re-injury squashing all hopes of a third world title in 2019, his knee may have also robbed him of the opportunity to compete in the Olympics and opened the door wide for Kelly Slater, who’s currently the second top-ranked American surfer on tour. Unless, that is, the lead Florence is currently sitting on sees him finishing the season as the second-highest ranked American on tour by the end of the year. Something that’s not entirely outside the realm of possibility.

If last year were an Olympic qualifying year, for example, Conner Coffin (who finished the year ranked 7th) and Kolohe Andino (who finished 11th) would have been the top two Americans on tour and subsequently been chosen to represent the U.S. At this stage, John John Florence is currently sitting on 32,160 total points and last year Coffin and Andino each finished with 32,715 and 27,600 points respectively. If things end similarly this year, Florence could still compete for gold come 2020.

Six events and as many months remain to see how things shake out, but for what it’s worth Kelly Slater has made his Olympic ambitions clear from the start. “Olympic qualification is on my mind,” he told the New Zealand Herald before the start of the 2019 season. And with John John Florence likely no longer in the heat draw for the remainder of the year, the stage is set for even more Slater theatrics and maybe even an Olympic berth.