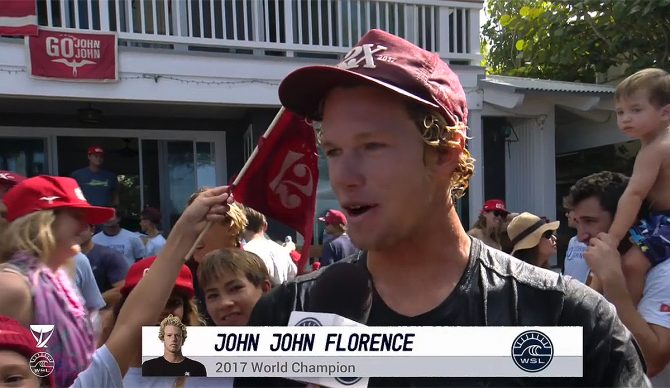 Number 2 in the books.

You’d have to be blind to walk more than 100 yards along the North Shore this month without seeing a red, “Go John John,” trucker hat. Drive a little further and there’s a red, “Go John John,” banner hanging in every other storefront. Today, John Florence is now the first Hawaiian to win back-to-back World Titles since Andy Irons’ three-years of domination from 2002-2004. Those red hats just became an even hotter commodity.

It almost didn’t happen, though. When the WSL arrived on Oahu to finish 2017 at the Billabong Pipe Masters there were four men with a shot at the title: Julian Wilson, Jordy Smith, Gabriel Medina, and Florence with the yellow jersey and the quickest path to the trophy. Make the final and he’d have the title regardless of what anybody else accomplished. But as much as that may have seemed like a lock, John John had actually never placed higher than 5th in six appearances at the Pipe Masters between 2011 and 2016. 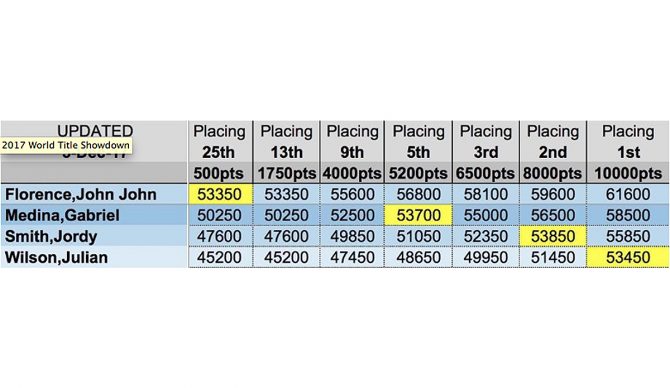 On Sunday, Florence matched up with Ethan Ewing in the Third Round. He took his final wave of the heat with just over two minutes to go, holding a 4.67 point lead over Ewing. In the next minute, Ewing found his way into a tube, exited, and finished it off with a turn…then the judges gave him a 4.60. Had that extra .07 been given to Ewing, we could have arguably ended up looking at Gabriel Medina’s hilarious/questionable/debatable/wtf roasting of Kelly Slater in the 5th Round as the defining moment that cost John John Florence his second World Title, allowing Medina to move on in pursuit of his own second title.

In the end, Florence didn’t need to finish it off himself, though. Facing off against Jeremy Flores in the Quarterfinals, Gabriel Medina was in a win or die scenario. With just over a minute to go, Medina needed a 7.99 to survive. His last wave of the heat was a hail mary attempt in which he never exited the barrel. The clock ran down without another wave ridden, and Medina’s title hopes ticked away with it. Meanwhile, John John watched it all in a backyard people wearing those red hats and waving those red banners.

“I was pretty nervous,” said John John Florence. “I’ve learned a lot about myself (this year). I’ve had to deal with the pressure and deal with someone like Gabriel…I’m so stoked right now. I still have some heats to surf, I smell like champagne. It’s pretty funny. I’ve got to go pretty soon…I get to surf without that pressure.”