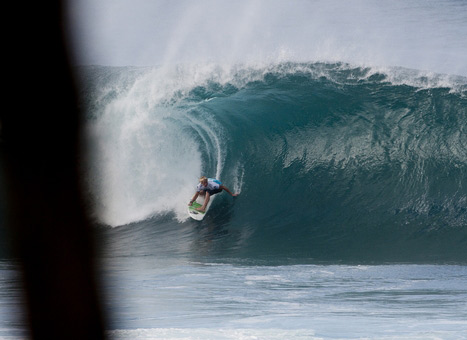 John John Florence: no stranger to Pipeline. That’s for sure. Photo: ASP

Rumor has it that the Pipe Masters might start on Sunday. Fact has it that there were 40 guys on the peak at six-foot Pipe this morning at dawn. To say that the crowds are hungry would be an understatement. Common knowledge states that wildcards are a big factor in this competition, but that’s only true in the early rounds. With the exception of the impossible-to-ever-quite-count-out Jamie O’Brien, no wildcard has taken the title in more than a decade. The reason is not, I suspect, a matter of who is better at surfing the spot, but who can surf consistently well for a string of heats. Consistency is not the forté of the wildcard.

With O’Brien out due to his splash-up with Ricardo Dos-Santos in Tahiti, I’m going to go ahead and count out the wild bunch when it comes to a spot on the podium. My next pick would have been Joel Parkinson, because he’s historically done well in Hawaii and is coming off a win last year. However, he’s been spotted this week in full on father/vacation mode. Is it possible to go from the extremes of swimming with your kids to hassling it out with fellow competitors at solid Pipe? Maybe, but I doubt it enough to take him out of the running.

We’d all love a down-to-the-wire bout between Kelly Slater and Mick Fanning in the semis, but I have a hunch that high drama isn’t in the cards this year unless the judges start juicing the scores to get them through their heats. It’s not out of the question, but the ASP doesn’t need that type of scrutiny now. What makes me think Slater and Fanning won’t push through on their own? Who knows? All the Longboard Lager has me feeling like fortune teller.

So after all that, I’m going to go with John John Florence. He burned me bad last time I tipped him, but I’m a glutton for punishment. Anyway, how can you bet against the kid in Hawaii? He got a barrel at Pinballs while paddling in from the opening ceremony at the Eddie today. Until then, as far as I could tell, it wasn’t even barreling.