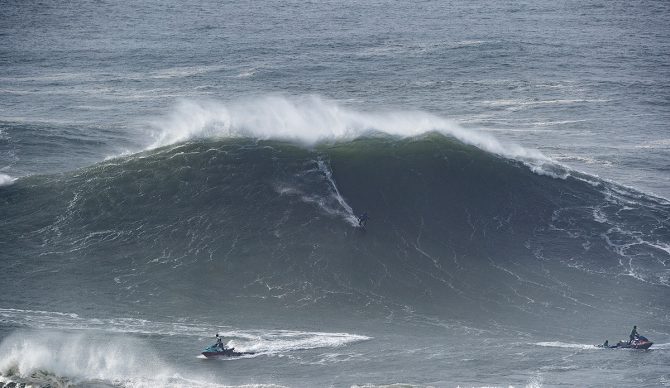 As promised, everybody involved in the first-ever Nazaré Tow Surfing Challenge gathered late Tuesday to celebrate the day and award its voted winners. This, of course, all hanging under the reality that one of its competitors very nearly died on a live broadcast earlier in the day.

There were plenty of wipeouts throughout the hours-long event, which played out more or less like a televised freesurf tow session than a Big Wave World Tour Event at Nazaré, but the one that closed the day out was definitely horrifying. The WSL almost escaped unscathed when Alex Botelho and partner Hugo Vau wiped out on their ski. By the time water safety got to Botelho he was floating face down and apparently revived on the beach, but anybody watching the broadcast wouldn’t have known that last part. Announcers went dead silent during the rescue for several minutes until the broadcast just…ended.

So it’s probably fitting to consider the most important award given after the event went to the water safety team at Nazaré. Surfers voted to honor water safety with the Jogos Santa Casa Commitment Award.

“Those 19 surfers involved are 19 of the best water safety rescue people in the world,” Big Wave Tour General Manager, Bill Sharp said. “So for the athlete riding a wave, your driver is your first line of defense. Each team also has their own back-up rescue operator, then we have a third layer which is a WSL crew in case someone is missed by the first two. Finally, we have the medical response on the beach with doctors and on boats.”

As for the surfing performance itself, Kai Lenny won both Men’s Wave of the Day and made up half of the winning Team Champions combination alongside Lucas Chianca.

“I wouldn’t have been able to ride this wave without Lucas so it’s as much his award as it is mine,” Lenny said. “That’s what is cool about tow-in surfing, I’ve spent the last couple of years competing against him in paddling events and it was great to finally get to team up and have the camaraderie to do it. He whipped me into that right just as we were riding back out, that wave just looked like it was going to wedge and it turned out way bigger than I thought it would be.”

Meanwhile, Justine Dupont was awarded Women’s Wave of the Day.

“I was so lucky I had a really nice wave at the beginning of the heat so then we felt pretty comfortable out there,” Dupont said. “I’m really happy, Fred and I had a good rhythm and Clement was there to pick me up after all the waves. All the work that we’ve done this past year has really paid off. There were some really big waves, maybe not giant, but altogether the conditions were perfect for competition.”