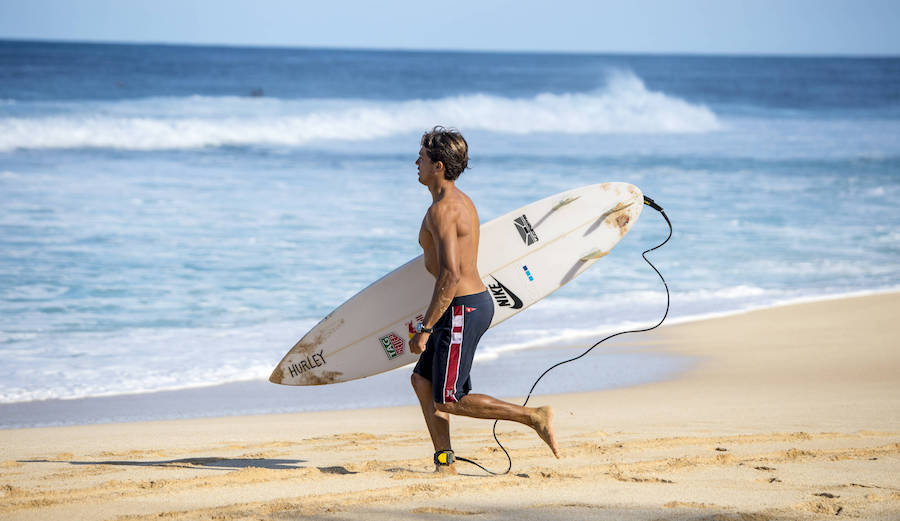 Kai Lenny is perhaps one of the few surfers in the world to whom the term “waterman” can be applied without a hint of irony. An accomplished stand-up paddle racer, windsurfer, kitesurfer, big wave surfer, and perhaps the most famous person since Laird Hamilton to step on a hydrofoil, Lenny hasn’t met a form of ocean-sliding craft he doesn’t like. But, of all the accolades he’s earned over the years, the one area Lenny hasn’t yet conquered is the WSL’s Qualifying Series and Championship Tour.

Earlier today, Lenny joined Joe Turpel and “1989 World Champ” Martin Potter in the commentary booth at the Quiksilver Pro. You may recall he snuck an autograph from his friend John John Florence this week. Turpel teed Lenny up to take a question from a fan that turned out to be Strider Wasilewski reporting from the channel. Wasilewski wanted to ask Lenny about intentions to give the QS a go and Lenny all but said that he’d like to give qualifying for the Championship Tour an honest effort.

“No doubt,” said Lenny. “For me, though, it’s more I came here because it’s one thing to watch it online and it’s another to feel the energy on the beach. And it was important for me to come down here and do that. I gotta get my surfing up, you know, considerably higher because you see guys like Kolohe throwing those out at will [Editor’s note: Kolohe threw a full rotation here on the webcast]. And I wouldn’t consider doing any kind of [QS] campaign until I feel like my surfing is up to par with the best in the world. Who knows? Maybe I’ll never get there but I’m gonna try as hard as I can to do it. And, you know, it’s something I had as a little kid dreaming in Hawaii. It’s the one notch, I think, I haven’t checked for me, personally, is to have that ability to be the best surfer in the water anywhere I can go.”