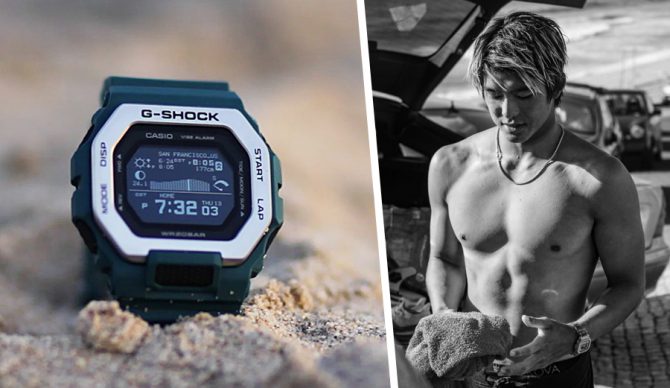 What in the world is a person supposed to look for in a surf watch? Nowadays, with so many gadgets and connectivity features incorporating new technology into one of man’s oldest tools, there’s a fine line between a watch that’s too complex for its own good and one that’s an invaluable part of your day-to-day life.

So what do you actually need on that little ticking piece of wrist machinery? And what don’t you need?

As a professional athlete — more specifically, as a top-10 competitor on the World Tour — Kanoa Igarashi’s time is valuable. While making his way through a pandemic-driven 2020 in which both the World Tour season and Summer Olympics have been postponed, he’s maintained a full schedule of training and preparing for the 2021 competitive schedule. Coupled with the fact that he once actually helped design a signature watch (see G-SHOCK GBX100), Igarashi’s brain is a good one to pick on what’s most important in a surf-inspired time piece.

Fresh off a plane from Tahiti (professional surfers get to train in the best possible ways), we asked him what he finds most valuable in a surf watch. Keeping these three basic principles in mind, he offered this insight:

Reliability is number one.

“All my equipment, I just want something I can rely on and depend on,” Igarashi says. It turns out he uses the G-SHOCK GBX100 for everyday training and competition, so in his eyes, he simply needs something that will work all the time, every time, without question.

“It’s just one of those things where I don’t like to think about variables and it definitely eliminates those for me. Technology and gadgets are amazing, but the main thing is durability. That’s my main priority and everything besides that is a bonus.”

Being tech-savvy is a good thing.

A man named Peter Henlein invented the watch back in the 16th century. It was simply intended to help man know the time of day, every day. He probably didn’t blueprint a way for his watch to connect to that supercomputer you keep in your pocket 400 years later, but in Igarashi’s own words, when it comes to technology, “everything helps.”

“Whether that’s connecting with your smartphone or any other feature the GBX100 offers, any technology that a watch can provide in a way to integrate it into my training and my surfing.” 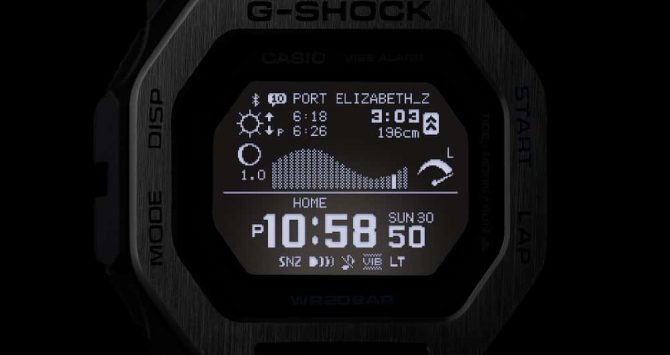 Tide display is essential. The G-SHOCK GBX100 has a LED Super Illuminator Backlight to make it easily viewable before dawn for the earlybirds.

Admittedly, Kanoa says he’s a pretty simple guy when it comes to his gadgets. That means first and foremost, using his watch as a digital tide chart has become an important tool. So the fact that the G-SHOCK GBX100 has an app that allows him to choose from 3,300 locations around the globe and easily displays moon data suits the life of a traveling surfer.

But still, if it’s been incorporated into the design there’s certainly a way it can help simplify your life.

“Obviously just being able to glance at a watch and know if the tide’s moving higher or lower — as a surfer that’s obviously the most important feature, but then being able to have that sync with your phone because we’re so attached to them makes it all so much easier to not lose track of anything, whether you’re in the water or in the gym.”

And that, of course, leads to knowing…

What will benefit you most?

“The timer for me is a must,” Kanoa says. It’s one simple feature that he leans on consistently because it’s necessary for two things that are consistent in his life: training and competing.

“The stopwatch is great for training, but having a timer that’s easy to get to is something that comes in handy (in heats). And then we incorporate that into my training, too. I do a lot of interval training, so whether it’s just setting a timer for 20 seconds on, 10 seconds off, or a minute on and 10 seconds off, whatever that is, a stopwatch ends up being something I use on a daily basis.” 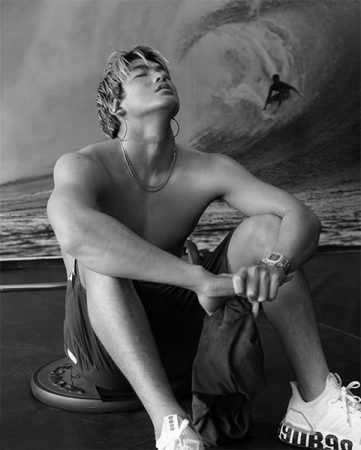 “The harder I work, the luckier I get,” says Igarashi. Logging time in the gym – and logging that time on his G-SHOCK GBX100. Photo: Bernardo Caro de Sousa

For those looking for training-centric features, the GBX100 tracks distances traveled, and the G-SHOCK Move app enables users to develop workout programs that track goals. The G-SHOCK GBX100 also has a vibrate feature. Just like a phone. This is super helpful in and out of the water, whether surfing or training with intervals or using vibration alert for incoming call/incoming email notification.

So the concepts above are the most important in picking out a surf watch to suit your needs, according to Kanoa. If you have daily routines that can be tracked, organized, or in any way simplified by features on a watch, then odds are you’ll find yourself using it daily. We may not all surf  CT heats, but many of us train out of the water, track tides, and plan our days accordingly. And oh yeah, we need to know what time it is.

This feature is supported by G-SHOCK GBX100. Learn more about the new surf watch here.