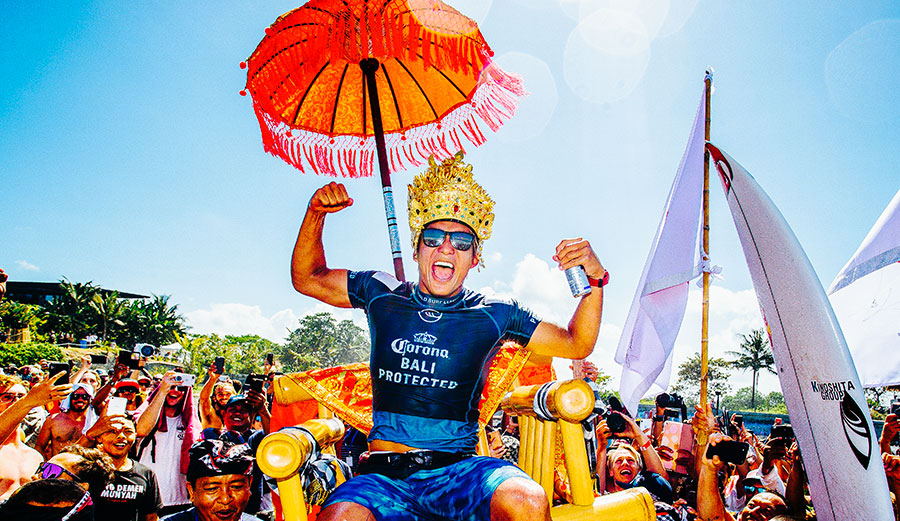 Igarashi, who hails from Huntington Beach but surfs under the Japanese flag (hello, Olympics), came up against tube-specialist Jeremy Flores in the final, whose rail work is nothing to sniff at either. Igarashi played Flores’ game, beating a power surfer with power surfing, ending with a final heat score of 15.10 and his coveted first podium.

“It’s something I’ll remember for the rest of my life,” Igarashi said. “I have so many people to thank, so many are sending good energy. I had a really good week, I feel I just did everything right. And when things are going your way, you run with it.”

Igarashi didn’t come out firing at the event’s start: his first three-man heat ended poorly – he only found one scoring wave, a 1.77. He totally redeemed himself, though, beating Peterson Cristanto in an elimination round, then Jesse Mendes, then Adrian Buchan, then Kelly Slater, making his way to the final by winning some stout match ups in pressure-packed situations.

This is only his second final. The first came as a rookie when Igarashi – who has more than proven himself to be as mentally tough as any young surfer on tour – clawed his way to the final of the Billabong Pipe Masters in 2016. If one looks at his march towards title contention since, it’s easy to see the progression: After his rookie year, he was 20th. In 2017 he ended 17th then last year he finished 10th. He’s now sitting in second. It’s still early but the Southern Californian is in his best position for a title fight yet.

“All the hard work you do, all the early mornings, all the times you’re in the gym alone, surfing alone, and working hard when no one’s watching, it all makes sense now,” Igarashi said.