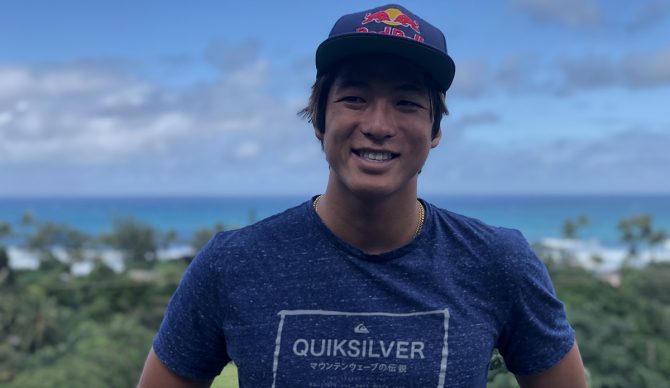 Kanoa Igarashi is looking forward to surfing’s Olympic debut. The longer the wait, the greater the motivation. Photo: The Inertia

March 2, 2020. About 50 people are crammed into a bar not much larger than your average apartment in Manhattan’s Greenwich Village. A surf film projects on one wall for a crowd that’s completely silent from the moment it starts until the moment it ends. That fact alone paints a stark contrast to an identical screening on the other side of the country where 300 people might pack into a surf shop or a full-size theater in a town like Huntington Beach, hooting on cue every time the star of the night tucks his head into a glassy barrel.

But nobody hoots here. Not once during the entire film.

“I purposely didn’t post anything on my social media,” Kanoa Igarashi says about the crowd.

He’s watching from the back of the bar with his family for what’s probably the first press tour of its kind in professional surfing, acting as the sport’s unofficial poster boy before the sport’s now-delayed Olympic debut. In the simplest terms, his task is to share surfing with mainstream media who have essentially no real knowledge of the pursuit and its culture.

“At the end of the day, it’s selling surfing to the outside world,” is how he sums it up. Visits with Vanity Fair, the Associated Press, HuffPost, the New York Times, and most of the press in this bar provide a juxtaposition with his rounds with the usual suspects in surf media. The Red Bull documentary is about Kanoa, his family’s roots in Japan, his parents deciding to raise him in an entirely different universe — Huntington Beach — and how soon it will all come full circle when Igarashi represents Japan in the 2021 Games. The absence of hoots feels like a precursor to surfing’s eventual existence in mixed company, with most people not knowing how to (or how not to) react to what they’re watching.

“As soon as I’d posted something it’d have brought a crowd here that’s used to seeing my surfing,” he explains. “That’s great for a certain time and a place, but I wondered what it’d be like in a crowd (of people) not knowing who I am.” He knows he can pack a room full of surfers. That’s just doing his job, he points out. The challenge now is getting people who don’t know who he is to simply take interest in what he loves to do. Surf.

Without really asking for it, Igarashi’s American and Japanese dual citizenship made him the unofficial global poster boy for the sport on its new stage. Rooms like this will become the norm. Although he didn’t ask for the role, objectively, he might actually be the best person for the job: world’s most famous surfer.

Surfing’s existing audience might think there are other candidates, but Igarashi’s is the face more non-surf fans will become familiar with than anybody else as a Team Japan Olympian. He already carries a large international audience and a diverse roster of sponsors. He likes engaging with media. He enjoys the interviews. He has a fashion sense that probably fits the cover of GQ better than the cover of a surf magazine. He likes talking about things other than surfing. He likes doing other things besides surfing, although his career schedule doesn’t allow much room for the life of a “normal” 22-year old. He’s relatable and he’s honest-to-God easy to like.

“It’s a crazy feeling because I’m still a normal kid,” says Igarashi. “I still love to go out with my friends. I’m addicted to training, I love to surf, and I’m just doing what I love. And to have that transcend, it’s unbelievable.”

Until recently, Kelly Slater would have been the automatic torch carrier for this position. The fact that it’s instead a second-generation Japanese-American man who’s quickly rising in the ranks of the World Tour while the 11-time world champ fell short of qualifying for the Olympics feels appropriate for the time.

But of course, this was the podium Kanoa Igarashi was preparing for on March 2, 2020. Even though there were less than 10 confirmed cases of COVID-19 in New York the night of that film premiere, within two weeks there would be more than 2,000. It quickly became the epicenter of a pandemic that put the entire world, least of all any 2020 Olympic plans, on hold indefinitely. Representing Japan and his sport on a world stage would have to wait.

The only bummer he can point out now, with six months of hindsight between that night in New York and his career’s indefinite pause, is that competing gives him an adrenaline rush. Outside of that, he’s a firm believer that everything happens for a reason and is sure to point out that the postponement of the Summer Games and his inevitable elevator ride to a new level of fame has brought more positives than negatives. He’s spending more time with family and friends, relishing the extra time to train and prepare for the Games and his next year on the World Tour. It all adds up to “some of the best months ever,” in his words.

So maybe we just consider that New York press tour a test run. For Kanoa, it was still a taste of at least one dream. Ironically, it was probably the last time most of the people at that premiere were also surrounded by more than 10 humans at once. But when the planned 2021 Games start nearing next summer, it will still be Kanoa Igarashi who’s tasked with carrying the torch onto surfing’s bright new stage.

“I’m gonna mark this down on my calendar,” he said that night. “We packed a random bar in New York. To have people who have no idea what surfing is, to bring them together and tell my story and show them — whether it’s five people or 100 people — open their eyes to surfing and spread our sport a little bit, that’s been a dream. I’m really honored to have my hand in that basket.”

Even if nobody in the room knew when, or what, to hoot at.