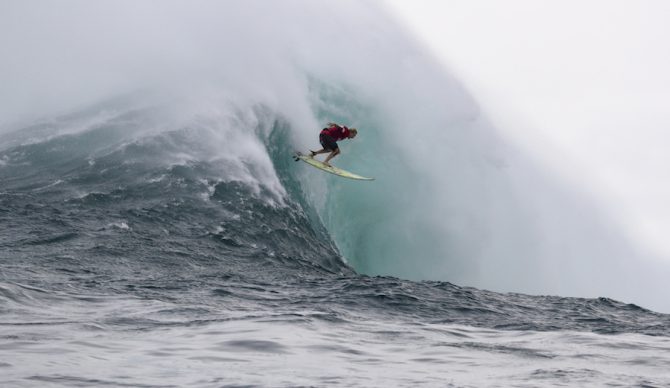 Keala Kennelly, fully committed on a meaty one. She was crowned 2018 Jaws Challenge champ. Photo: WSL/Hallman

Keala Kennelly calls it like it is. So it probably shouldn’t surprise me that on the day she’s just won the 2018 Jaws Challenge, she’s not rattling off the polished, disingenuous, and mostly hollow comments athletes give following wins. You can count on most WSL athletes to talk about competition as candidly as an NFL coach at a post-game presser….Not candid at all.

“Ho-ly sh**,” are the first two words out of her mouth before we even say hello. “That was a heavy day.”

Monday at Jaws was significant for a lot of reasons. The most important might be that it marked the first time men and women received equal prize money for putting their lives on the line at the same wave. Something the Kauai-born surfer personally fought for as one of the founding members of the Committee for Equity in Women’s Surfing. And that’s exactly what the ladies did. It was impossible to watch both the women’s  and men’s (later put on hold) without cringing once or twice. Jaws was heavy in all the wrong ways — a fact highlighted when Kennelly pointed out the waves didn’t look very inviting from the start. “Paige [Alms] and I were like, ‘We wouldn’t have free surfed that’ — being that windy,” she says. “We would have pulled up and been like, ‘This sucks, let’s go.’ It was nuts…almost like surfing Shipstern.”

So, actually making it to the bottom of a wave was an exception Monday. Nonetheless, the ladies put their heads down and charged, literally, through the whole thing. That alone had to have marked the decades of progress KK’s been fighting for to earn an equal place in the sport for women. So naturally, she had a lot to say after a historic day, from mixed feelings about winning a contest without completing a single wave to recounting the moment she thought she might die.

On the bittersweet taste of her win:

Hopefully, they call on the Maverick’s contest and we can have some glassy conditions and we can all make our waves. Because if I won a World Title and didn’t score over a three, I don’t know how I’m gonna feel about that. I’ll take it because I’ve put in a lot of work and I’ve tried really hard to win that (World Title) on the ‘CT and the Big Wave Tour and it’s slipped through my fingers so many times. But I’d much rather have a convincing result at Maverick’s if I’m actually going to get that trophy.

On taking a beating in the Final:

I cartwheeled on my first wave and thought I broke my neck. The wave pounded me and just ripped my leg so hard I thought it was gonna get pulled out of my hip joint. My leash broke and then I went and got my other board, went back out and just got more donuts. So I took three huge cleanup sets on my head during the first part of the Final.

The last two cleanup sets I took, I was completely out of CO2, so I had to wear those and had no flotation, getting pulled under for a long time. The last wave that I got caught inside of, Bianca scraped over it and I was just inside of her. At that point, I’d broken leash number two. I remember thinking ‘Fuck, maybe I can make it,’ and then as I’m getting to the top of it I can just see the thing breaking already. I got dragged backward over the falls with no board and no leash. So I just got the ass-kicking of my life. I thought I broke my back and was seeing stars down there. I had no CO2 to inflate and I also had no board. I thought, ‘I’m gonna black out and die because they’re not gonna be able to find me. I’m not attached to anything and I don’t have any CO2 to pull.’ It was super sketchy. I got held under for a long time.

So, the last five minutes (of the Final) I was on the boat already because I thought I’d broken my back.

On just how heavy Jaws was:

Paige had a pretty decent wave in the first heat. I was in the second heat and by that time the wind just kicked up like 10 knots and it was just nasty. It was so hard to get down the face of it. And even if you did there was just so much chop and so much wind under your board. Every time you hit a chop, winds shoots under your board too, which was so hard and so challenging. I was trying to send it as hard as I could but man, it was tough.

It was very nerve-racking because it was very dangerous. The guys went out the very next heat and I was curled up on the medic boat just like, ‘Don’t touch me, I can’t move, I’m in so much pain.’ I just laid there and then they brought Twiggy to the medic boat and he was coughing up blood. That was super sketchy. He coughed up so much blood it was scary and then they called it off right after that. The conditions were just treacherous. It was savage.

The girls were just getting lickings and I thought ‘God, if the guys go out and they’re making every wave it’s gonna make us look terrible.’ But then they went out and were having a hard time too and so I don’t feel so bad.

HUGE! It’s funny because everybody who was on the committee made the finals (laughs). I’m really proud of all the girls for just putting it all on the line today because everybody was throwing themselves into some scary shit, taking lickings, and going back out and trying again. There were a lot of waves where I wouldn’t have judged anybody for pulling back on.