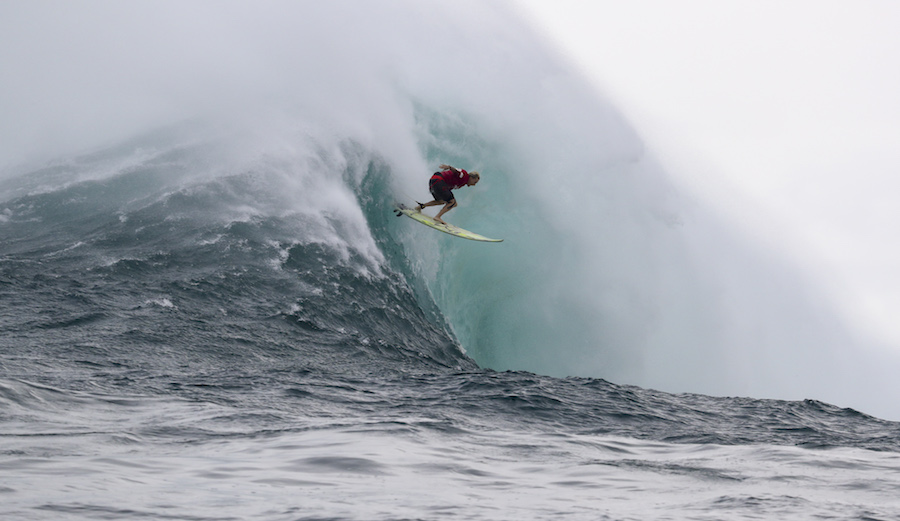 On paper, the prospect is simple enough. Put together two solid heats, and walk away with a floral crown on your head and your name in the history books. In practice, though, a win at Jaws, in all its bone-crushing fury, might be one of the highest achievements in competitive surfing. As big wave legend Dave Kalama explained this morning from the commentary booth, Nazaré is, without a doubt, the tallest wave on the planet, but there’s no other wave that breaks with the same ferocity as Jaws. Today Keala Kennelly came out on top, and she has the bumps and bruises to prove it.

Now in its third year, the women’s event at Jaws did not disappoint. Pe’ahi standout Paige Alms may have been the favorite, but Justine Dupont showed up to blow up in the first semifinal heat, finishing with the top score of a 12.50.

From her semifinal heat through to the final, though, Keala Kennelly was absolutely relentless in her willingness to throw herself over heaving ledge after heaving ledge – going over the handlebars twice in the final and skipping down the face.

What the event lacked in complete rides, it made up for in absolute commitment as the ladies bounced back from beating after beating. Not to mention getting swept to oblivion by a cleanup set. Kennelly spent the final minutes of the women’s Final on the medic’s boat, having to ditch her board after her leash broke and she had no CO2 left in her safety vest.

“I just got the ass-kicking of my life,” she told The Inertia. “I thought I broke my back and was seeing stars down there. I had no CO2 to inflate and I also had no board that I was attached to because my leash broke. So I started seeing stars and thought ‘I’m gonna black out and die because they’re not gonna be able to find me.'”

It was obvious the conditions were difficult to manage for both the men and women and Keala admitted that had there been no contest, she probably wouldn’t have been tempted to free surf Jaws after looking at the conditions. “There was so much wind going up the face that it was impossible to get down the face,” she said. “I felt like I airdropped and pulled it and then airdropped again. It was almost like surfing Shiptern.”

And while all the wipeouts and airdrops that sent surfers tumbling down the face of almost every wave on the day were a testament to just how heavy Jaws was on Monday, it left Kennelly with a bittersweet taste from her first Big Wave Tour win. “I have very mixed feelings about winning a contest where I don’t make a wave or score over a three. I didn’t kick out of a wave onto the shoulder like ‘Yay, a complete ride!’ I basically just got my ass handed to me and I didn’t score over a three but somehow I won. I didn’t get that feeling of ‘Oh, I killed that heat and I got such a good score’ It was a very low scoring heat and that feels weird.”

Kennelly’s win comes just months after the World Surf League announced it would institute equal pay – a move influenced heavily by a push for equal pay at Maverick’s by the Committee for Equity in Women’s Surfing, a group of which Kennelly is a founding member. Under the WSL’s new pay parity policy, female competitors at Jaws will be the first to take away the same prize money as their male counterparts.

This story was updated to include comments from Keala Kennelly. Juan Hernandez contributed reporting.