Kelly Slater Is the GOAT; No, He Really Is a Goat 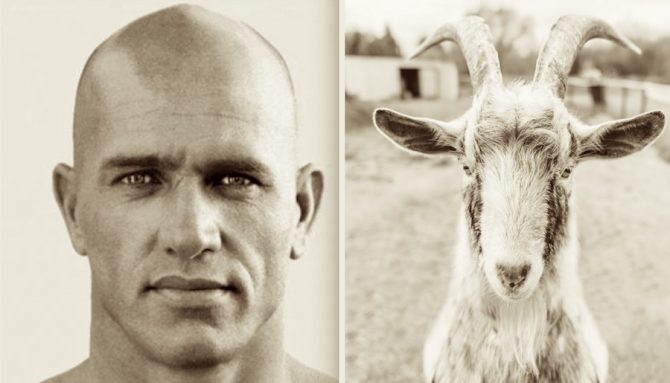 Half human, half goat? Photos: The GOAT (screenshot); The goat (Edgar Chaparro)

Kelly Slater is the greatest surfer to ever shred this planet’s waters. This statement will surprise precisely no one. With eleven world titles and countless moments of innovative brilliance, the conversation is not really about if he is the best surfer ever, but one of the greatest athletes of all time. Kelly has been so dominant that he became bored with conquering naturally occurring waves and had to engineer his own to find a suitable challenge.

He has been more successful in his non-surfing pursuits than most people are in their entire singular careers. Recording an album with Jack Johnson, acting in movies and TV shows, and dating Pam Anderson and Gisele Bündchen in their primes. Highlights of any normal person’s resume are mere bullet points on his long list of achievements. His career has been so illustrious that he needed not one, but two autobiographies to encapsulate all his stories. I suspect another is forthcoming in the post-wave pool era. The only fathomable explanation for how he could have accomplished as much as he has is that K-Slay is not human; he is actually a wild animal. Kelly Slater must be a goat (the actual animal). Let me explain.

At first glance, he may not look much like a goat. You may think that piercing blue eyes, perfectly tanned skin, and a hairless dome are not trademarks of a popular buck. You would be wrong. Science has gifted the four-legged creature light irises, setting it apart from all the other barnyard animals unfit for modeling careers. And, with a tan as the dominant allele color in a goat’s fur, this means that Kelly was always going to be born perfectly bronzed.

As for the hair, it is very common to shave goats for show. Popular free-range goat, Rob Machado, stopped receiving trims once he was voted off the contest circuit. But Kelly, ever the competitor, needs to stay shaved at all times so he is ready to perform at every event from the Louisville Livestock Expo to the Pipeline Masters.

Since they are Instagram-certified yoga instructors, the most well-known trait of goats is their superior balance and agility. And, I mean:

What sorcery is this??!! I know this happened five years ago, but I’m still not over it. I refuse to believe a human being can manipulate space, time, and whirling fiberglass to so gracefully evade a broken nose and then continue about their business as if nothing happened. And, in case you thought the aerial save above was a fluke and not something hardcoded into his DNA, he did it again. Kelly himself could call me to explain how all the hours he spent practicing jiu-jitsu and working on his putting game provided him with the strength and patience needed to emerge unscathed, but I would still call bullshit. Actual goats are unafraid of balancing on minuscule rock ledges hundreds of feet above the ground. When they stumble, they recover gracefully and continue their ascent to the top. This was truly a maneuver only a goat is capable of.

This same athletic prowess makes goats impossible to contain. They are well-known escape artists, able to flee their pens with ease. Mother Nature’s fence, age, has been trying to stifle Slater for years, but he continues to David Blaine his way out of trouble and into more amazing accolades. He won a title while pushing 40, a feat that makes my back muscles quiver with fear. In more recent years, he worked on crafting a scientifically-perfect wave, his own line of surfboards, and an apparel company. He essentially constructed his own self-sustaining surf sphere outside of the larger surfing world where Kelly is his own sponsor, shaper, and swell generator. Attempting to build a pen high enough to contain the Dan Mann-shaped plane Slater has ascended to would be a fool’s errand.

Billy Slater stands alone atop the highest wave mountain. Eleven world titles and multiple DVD box sets of Baywatch surround him, serving less as trophies and more as warnings to any challenger that may attempt the perilous climb to dethrone him. Kelly is an unflinching, stone-cold wave slayer ready to lock horns with all that enter his crosshairs. Because Kelly is no normal man – he is the GOAT, no not the acronym, he’s actually a goat.

At press time, a young surfer named John John Florence had been spotted wearing hats to conceal two small nubs protruding from his forehead while grazing in the fields of the North Shore.