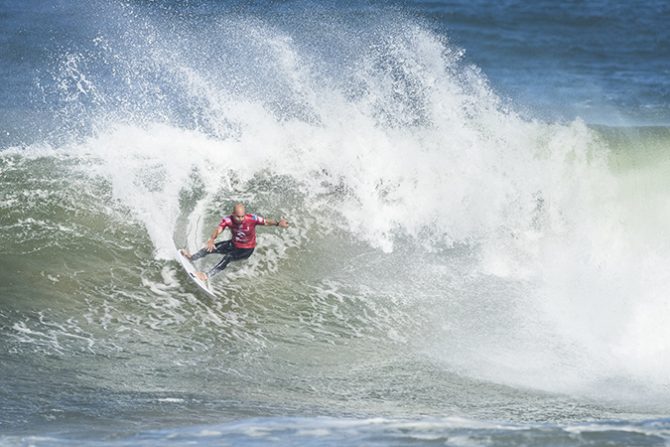 And he rode a quad. Slater will go for his fifth Bells title today. Photo: Cestari/WSL

Well, I guess it’s as it should be. Looking comfortable in giant Bells Beach, Kelly Slater earned a spot in the quarterfinals in ultra-rowdy conditions that left him panting like a spent marathoner at the conclusion of his heat Friday – like every other competitor in Victoria. On a day when the end move was the most critical part of the ride, in surf that sometimes resembled an In-N-Out burger (animal style), Slater finished his waves with just enough panache to move on.

The “50-Year Storm” arrived (not really, but it’s a timely pop culture reference the WSL jumped all over), with faces regularly in the 10-15 foot range. And the beatings were real. Seth Moniz took a shocking dumper when he tried for a final hit – albeit a bit late – sending him over the falls ferociously on his back. And there was luck, too, maybe more than usual, as competitors patrolled a lumpy lineup that moved like a river, trying to pick waves that would provide a lined-up wall. Sometimes, in the most crucial moment, a wave would look as though it would hold up and form on the inside following a series of setup turns and pumps, only to transform into a burger, frustrating exhausted jersey wearers (ask Conner Coffin, ousted by Ryan Callinan). 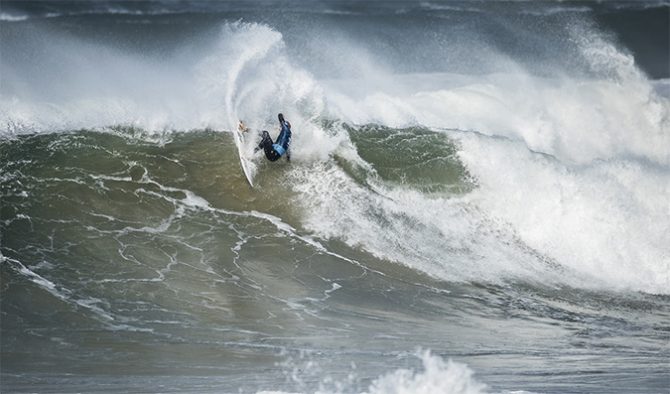 That was awesome! John John, surfing as though he never had a knee injury. Photo: Dunbar/WSL

Despite its propensity for getting fat, the surf wasn’t forgiving to surfboards, with a floating foam and fiberglass graveyard littering the channel, leaving competitors scrambling up the shoreline looking for backup boards, sometimes creating frenzied scenes for the crowd lining the tiny stretch of beach pinched by the tide and sizeable surf. In his matchup with John John Florence, Owen Wright waved his caddy down for a replacement board, heading to the water only to realize it wasn’t waxed. He then ran back toward the crowd, twice screaming up the stairs for board handlers to throw him wax – the first too hard – wasting valuable time. John John took advantage with some of the most brilliant surfing of the day (Gabriel Medina and Filipe Toledo notwithstanding).

@sethmoniz free falling 😳 – #RipCurlPro @ripcurl_aus – Watch Bells how you want and when you want on worldsurfleague.com. The all new WSL Replay experience puts you in control. Choose your starting point to watch your favorite surfers, excellent scoring waves or re-start the day.

That was all after Slater made it through to another quarterfinal – albeit with the lowest heat total of the round of 16 – looking for a record fifth victory at Bells. He’s won the event in three different decades. Eleven world titles, of course. Yet he’s had doubters galore this season. We’ve seen it firsthand on Facebook and Instagram and in online comment sections. I even had the audacity to ask if he’s stealing the limelight from younger up-and-comers in December. It’s all fair. Guy is 47. But here he is, on the eve of a Tiger Woods-like comeback (minus the nefarious misdeeds) after a broken foot kept him out of competition for the better part of two years. He’s been in more Bells events than anyone else in the field and I hope we see him in 100 more quarterfinals. The quad he was riding worked oddly-well and the heats have lined up to give him a real chance at the semis. After beating Julian Wilson in a tough draw, Kelly narrowly defeated the less-experienced Peterson Crisanto and now faces Ryan Callinan (noted that Callinan was on fire yesterday, even Kelly was impressed).

As much as I love Kelly’s momentum, I’m still on Team Doubter for an event win. John John Florence, Filipe Toledo, and Gabriel Medina were surfing at another level. Their wave choice, or the luck of the Southern Ocean, saw them with the best canvases to draw powerful lines bookended by sharp top turns, finishing waves unlike the rest of the field. And the quarters see the two best surfers in the world right now (Gabs and John John), pitted in a fantastic, can’t-miss matchup. Friday afternoon web watching (Saturday, Downunder), promises to be pretty bitchin’.

Check the WSL Facebook page for start notifications or go to Worldsurfleague.com