Surfing’s Champions: Class Acts Among the Slums of ESPN 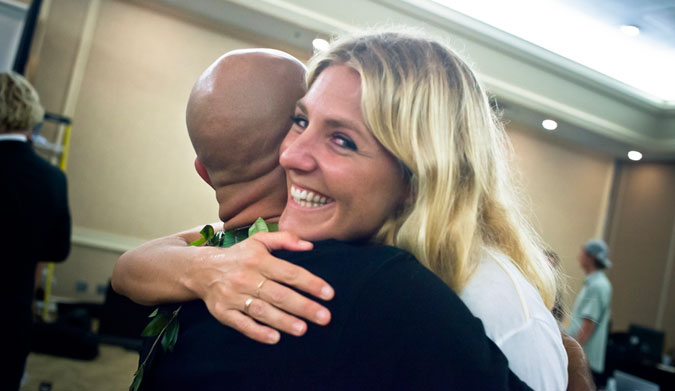 Steph Gilmore and Kelly Slater have 17 world championship titles between them. That’s collectively more trophies than the number of years many of the groms at your local break have been alive. The winningest surfers in the history of the sport are articulate, telegenic, and good-looking. Not to mention stellar human beings. Most importantly, they’re free from the taint of any major scandal or unsavory behavior. Surfing has two preposterously talented and marketable representatives, yet it’s still languishing in the lower-middle class of professional sports.

There’s no shortage of fallen heroes in professional sports – athletic champions, but flawed individuals. For every Derek Jeter there are countless Michael Vicks, Lance Armstrongs and Kobe Bryants. Hell, even Jordan had a problem with blackjack. Professional surfing has very rarely had to engage in the complicated public relations tightrope-act of vigorously promoting a superb athlete who is simultaneously embroiled in a criminal or morally bankrupt personal life. Has drug abuse been an issue in surfing? Perhaps. But that’s a far cry from homicide, domestic abuse, weapons charges and slaughtering pitbulls.

Somehow, professional surfing caught a lucky break – two of its highest-profile athletes are superb ambassadors for the sport. But despite all this good fortune, the surf industry still remains the Little Engine That Could of organized sports. Surfing’s governing body was so unmarketable that they were forced to reboot and rebrand themselves as the WSL – and currently, they’re running at a multimillion dollar deficit. What about that Quiksilver stock you have? It’s now about as valuable as that electric wetsuit you thought was a great idea when you bought it a few years ago.

Is surfing simply not ready for prime time? Is the surf industry being run by, well, surfers instead of savvy businessmen? Is it inherently foolish to try to cultivate and monetize a competitive sport from an activity many consider a leisure activity or an art form? If Kelly Slater’s icy blue eyes and Stephanie Gilmore’s radiant smile aren’t enough to lift the sport into the big leagues, then what will it possibly take? That’s a hell of a lot of pressure to place on the shoulders of our favorite blonde-haired future King from the North Shore. Godspeed, John John.