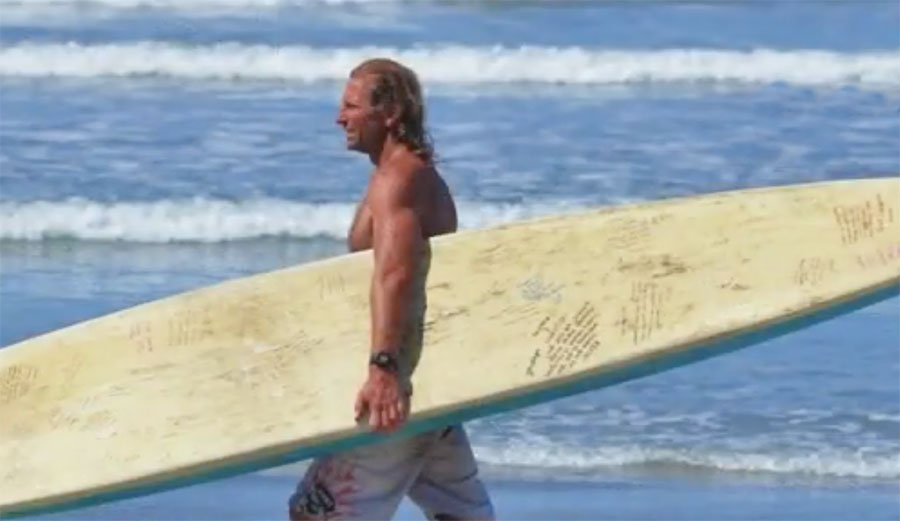 Kevin Eslinger, a San Diego waterman, is in hospital with a fractured skull after a paddleboarder smashed him over the head with a paddle at Sunset Cliffs. Photo: Jim Grant/10 News

According to reports, a paddleboarder broke a man’s skull at San Diego’s Sunset Cliffs on June 26th. Kevin Eslinger, an accomplished paddleboarder himself, got in an argument with another man who “cracked the paddle over Eslinger’s head.” The blow was hard enough to fracture his skull.

Elsinger is well-liked in the community. He lives an interesting life that revolves around water. Working as a swim coach, Elsinger has a degree in philosophy and spent years living on a sailboat. Although he generally rides his bike, he also drives an old Volkswagen van. Elsinger also holds the world record for the longest continuous prone paddle, which was 120 miles from Santa Barbara Island to Ocean Beach in San Diego.

After the attack, Eslinger swam back to shore under his own power while the attacker swam away. “He got himself out of the water,” said Pat Tope, one of Eslinger’s fellow swim coaches, to 10 News, “which is pretty remarkable. Now, Eslinger is recovering in the hospital. “He was having difficulty with his speech, but since then his speech is slowly starting to return,” Tope continued. “So it’s going to take some time for it to get back to normal.”

Although police are investigating the attack, no arrests have been made. According to one Reddit commenter, however, police have an idea of who the assailant is. “Plenty of people know who it is and have reported him,” the commenter said. “Everyone in OB knows about it. The police have his plate #.”