World Tour surfer Kolohe Andino wants to be remembered for his brisket. Well, that and a few other things. Speaking at a packed Hurley Surf Club gathering at the industry giant’s HQ in Costa Mesa, California this week, the San Clemente local was grilled by some of his biggest grom fans. They wanted to know about things like his diet (he had 2 eggs, 3 slices of turkey bacon and half an avocado for breakfast that day), while also tossing out other more pressing questions relating to his career, such as who his early surfing influences were, his admiration for fellow competitor Nat Young, how he handles the pressure of competitive surfing and his desire to stay humble, grateful and hard-working.

Andino holds the record for the most National Scholastic Surfing Association (NSSA) championships won by a male competitor (9). He won both the 6-Star Quiksilver Brazil Open and the Vans Pier Classic WST events in 2011. He ended the 2016 tour behind only three men: John John, Jordy and Gabriel Medina in the rankings.

“What did you have for lunch?” yells an eight-year-old, one of the approximately sixty groms packing the floor in front of Andino’s stage. They were seated attentively at their hero’s feet, literally, all dressed in Hurley tees with “Support 22 Brother” emblazoned on the back. “What’s your favorite wave in the world?” asks another.

“Spinach,” comes the reply, “with salad and sprinkled stuff like nuts. And avocados. I like avocados. Lovingly prepared by my fiancé,” Andino goes on, smiling and waving out to the blonde bombshell sitting in the audience, their two big dogs at her feet.

“Pipeline,” is the answer to the other question.

“What’s your favorite ride you’ve ever had?” another kid asks.

“It was, in fact, just in the video clip you’ve seen,” Andino replies (there’s a big screen in the auditorium; the audience has been treated to yet-to-be published flashes of Andino’s brilliance, hoots of approval all around). “I got this great barrel and then came out and landed a sick air. That’s the best ride I’ve ever had.”

The fascination with his diet continues: “How do you cook your brisket?” Andino indulges his protégés’ childish questions further and pokes a little fun at them: “I’ve got to watch out for these kids, they want to steal my waves. There’s some really good talent coming out of San Clemente and it’s epic to see. I see a really bright future in a lot of these kids.”

Along with the strict diet, Andino has stepped up his competitive game, getting up at 4 am every day. He does some training, a mediation. He surfs at least twice a day, no matter the conditions, and puts in time with a personal trainer up in Huntington Beach.

“The biggest pressure I ever had was from myself. I think if any of you guys have ever seen any of my freak-outs—that I don’t do anymore, those are out of me—it’s not a lot of pressure, it’s just that I wanted to be good so badly, trying to force it so much, it just came from my competitive nature. I don’t know why I have it that badly,” he says.

He cites Aussie stalwarts Taj Burrow and Mick Fanning as his childhood surfing models. “I met Taj when I was like 8 years old and he was my greatest surfer, I was just obsessed with him—because of Montaj—and he always remembered my name and I was like, that’s so sick, he knows my name, it’s kind of a hard name, no-one ever remembers it.”

“So, I always wanted to surf like Taj backhand and Mick forehand, I always thought that was an epic combination. That was before Jordy and Dane started doing all their tricky stuff. I was lucky enough. My dad was in the industry, an ex pro-surfer, and I would just hang out with these guys and go surfing. The same with Andy Irons. When I was like 9 or 10 I surfed with Andy a bunch when he was in town, going for his first world title—that was the year he just smoked everyone—so it was just luck. You can’t pick your parents but I got the right ones.”

On his contemporaries and friends: “Nat Young, rookie of the year. As far as surfing goes and competitive-wise he just puts in so much work, something I never did until last year, and it really paid off for him. I more, like, morally, look up to him outside of the water. He is just a rad, stand-up dude and just always sticks up for what he believes is right. Definitely not a pushover if you’ve ever met him. He’s an epic guy.”

So, what does Andino really want to be remembered for, he’s asked in closing? “Being a hard-working, very grateful young man. I think your attitude is a very big thing. I think once you realize how lucky you are, you become grateful and you begin to work really hard for your goals, or whatever you have planned for your life.”

On accepting a prize of one of Andino’s signature pro boards at the close of proceedings, one of the San Clemente groms gushes: “Kolohe has really inspired me for all his hard work. He’s always been pushing himself to be better.” 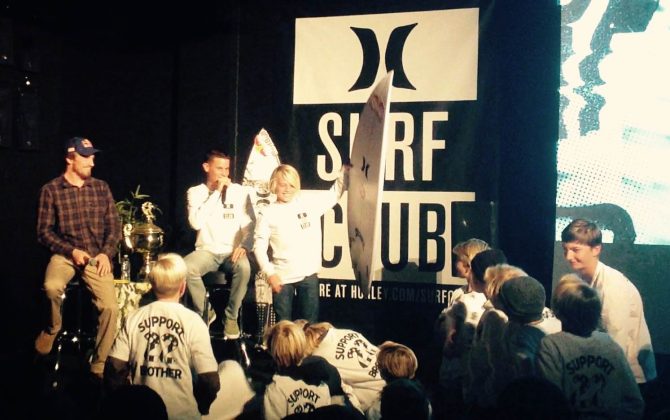