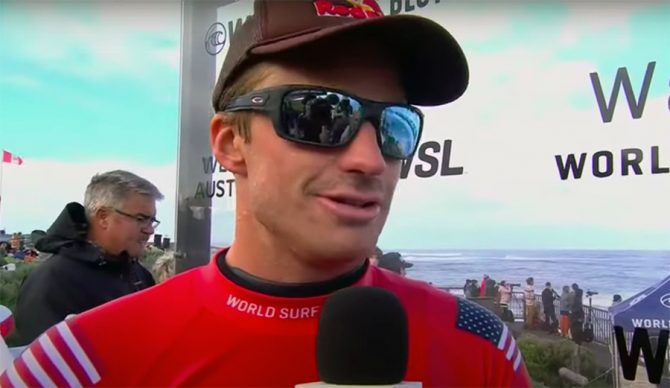 No one was in a mood to party. Photo: Screenshot//WSL

If you watched yesterday’s live broadcast of the Margaret River Pro (or the replay), one thing is evident: no one was in a mood to party. From those below the cutline who’re headed down to the Challenger Series, to those who made it and sent them packing, there wasn’t a whole lot of celebrating. But it certainly did one thing that was predicted: it created way, way more drama in Western Australia. Every heat mattered. And no one’s post-heat interviews revealed more yesterday than Kolohe Andino’s.

“It’s rare to have a heat that’s not stressful (these days),” said Andino, who we just learned had to pull out of Margies today due to a stomach bug. “The whole cut thing, no one really likes it, but we all like winning and we’re all friends on tour and we all love each other so you don’t want to knock the guy off tour.”

The WSL trimmed a third of its surfers from the men’s and women’s side in the last few days and the stress was palpable through the screens. Owen Wright, who isn’t quite sure if he’s being sent down yet (he has to wait for today’s results) was sullen. Sally Fitzgibbons was devastated after the end of her almost decade and a half run on the tour. And the worst part is they miss G-Land in May, the reeling gem-of-a-left which was just brought back to the tour.

“It seems like it’s a TV show,” Andino continued. “Just drama all the time and watching the women’s the other day, it was just heartbreaking with the women that were losing. They were crying all day. It was gnarly to watch.”

It no doubt made for intriguing television. Andino also confirmed one other suspicion of many pundits. The cut has most likely upped the level of surfing. “I definitely know the caliber of surfing has raised throughout,” he said. “Usually a lot of guys if they get a result or two early in the year they kind of mail it in knowing that they’re going to qualify. Seems like everyone is trying their best and everyone is ripping really hard so it’s good for that.”

In another interesting piece of equipment tweaking, Kolohe explained that he went to a local hardware store and added a half-pound of weight to his board to use at Margaret River. He apparently liked the size (6’4″) and the feel in smaller waves and wanted to use it at big, windy Main Break where a little extra weight could likely help keep a board attached to a wave face. To wit, he tweaked his Mayhem (not sure if Mr. Biolos was stoked). He explains his mid-tournament customization below.

Oh, and the contest is live, right now and they have to finish today. Which will be big one. Watch here.