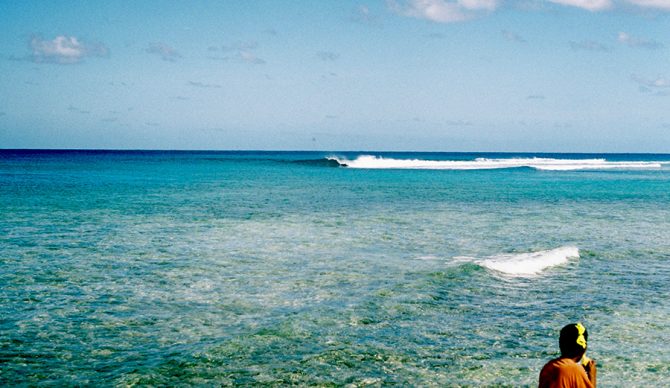 Kiribati is the literal middle of the world. It’s one of the most remote places in the world, which is why you probably wouldn’t expect this little plot on the globe to have an official, organized surfing association. The Kiribati Surfing Association (KSA) resides upon the atoll shores of South Tarawa, the main metropolis amongst the 33 islands and atolls of the Republic of Kiribati. There are also members across the globe, having themselves sampled Kiribati at its fabled best.

What the association shares is simple and rewarding. The pristine nature of Kiribati’s waters, the epic reward you receive through careful research and a little browsing on their new website. Hooking up with the KSA crew would make for a fair trip into the unknown. Referring back to how remote this country is, it can only be accessed through Fiji or Nauru (I would get some pretty significant health insurance or a gig with a foreign aid agency). Nauru probably isn’t on many traveling surfer’s radars, but it could give you an opportunity to vent frustration in person.

The launch of their brand new website brings some perspective to the discussions of lesser-known, remote locations in the world where you can still get good waves to yourself. But making the information available to anybody willing to look, some of you just may be influenced to try a new destination when the next south swell season comes around. Or perhaps when north swells pump down from the Marshall Islands you can jump on a boat, en route to an island steeped in mystery.

It is a tricky predicament when “sharing” information of a previously (mostly) undiscovered plethora of breaks. But to the contrary, spreading the word of such a place is rooted in the belief that a place like Kiribati should be shared with anybody willing to go the extra mile to experience something special. The local surf scene is in need of international influence, mainly to get the local grommets out and amongst the waves.

If you’re so inclined, you can enjoy the spoils thanks to a number of hardworking individuals who made it possible.

Editor’s Note: You can learn more about the Kiribati Surfing Association at www.surfkiribati.com