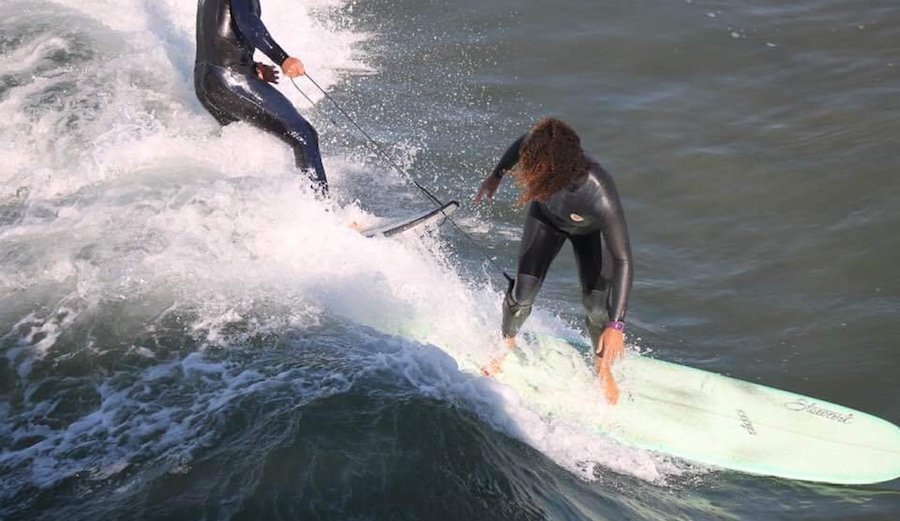 “In all my years of surfing, I’ve never been attacked unprovoked like this.” Photo: Rhonda Harper

A surfer and surf school owner in Venice, California is under fire after aggressively pulling a female surfer’s leash on Tuesday morning at the Venice Pier.

Wagner Lima, owner, and operator of Brazilian Surf Club, was captured on camera paddling for the same wave as Danielle Lyons, who was riding a longboard. Photos show Lyons in clear priority position going right on a small two-foot wave, and as she passed Lima further on the shoulder, he grabbed her leash causing her to fall.

Here’s a frame by frame:

“I was up and riding on the peak and [Wagner] decides to try to block me, so I turned around him, then he drops in behind me and pulls my leash causing me to fall,” explained Lyons in a Yelp review for Lima’s business. “Not only is what he did super dangerous, it’s assault.”

Rhonda Harper, owner of Black Girls Surf, was on site shooting photos. She told The Inertia she was hosting Senegalese surfer Khadjou Sambe while NBC was shooting a profile on the Olympic hopeful, and had invited Lyons, president of San Diego Surf Ladies, to be a part of the shoot. Harper was on the pier as was one filmer from the network. Another was shooting from shore.

“[Lima] was acting aggressively the minute the girls started to paddle out in the water,” said Harper. “Even before he went out, he came on the pier and asked the camera crew from NBC who they were filming.”

Jeff Mercado of NBC captured the incident on camera from the shoreline. He told The Inertia that Lima told his colleague on the pier Lyons and Khadjou were “a joke.”

“What I noticed after I came back to the office and started going through clips and everything was that [Lima] had been kind of lining up these girls a couple of times,” said Mercado. “So, the idea that this was reactionary is just kind of bogus.”

“In all my years of surfing, I’ve never been attacked unprovoked like this,” wrote Lyons on Yelp. “I gave this guy every opportunity not to be a dick, hell I even gave him room to share if he was that hard up for a two-foot wave. I’m not sure if this was localism, racism or sexism. There were two black women in the lineup and he targeted me for whatever reason. I certainly would not support a company that maliciously attacks people.”

According to Lyons, once Lima realized the incident had been documented by not one but three cameras he claimed the whole thing was an accident and later offered the same explanation in an attempt at an apology in the parking lot.

“Not only do you assault random strangers, but you try to create doubt in their minds. Hope you enjoyed getting sprayed in the face by my RinseKit, douche,” she said.

Since the incident, Lima’s business page has been flooded with one-star reviews, and his Instagram account has been deactivated. He could not be reached for comment for this story.

It’s worth noting that even before this incident, older Yelp reviews suggest that Lima’s behavior may not have been out of character. “This guy is a jerk!” wrote Michelle O in August 2017. “Impatient and rude is definitely the best way to describe them (sic). I’ve also tried calling and got hung up on. Not professional at all!”

There were also positive reviews from before the incident that complimented the instructor’s business.

Harper told The Inertia of her intent to file a police report because she feels they were specifically targeted in the water.

“There is absolutely NO EXCUSE for this,” wrote Black Girls Surf on Instagram.

Editor’s note: This story was updated on Thursday December 6 at 12:47 pm to include a comment from Jeff Mercado of NBC.

Correction: An earlier version of this article stated that Lyons and Harper planned to file a police report. In fact, it was only Harper who filed the report. An earlier version also implied Lyons and Harper were both hosting Senegalese surfer Khadjou Sambe. Lyons is not affiliated with Black Girls Surf in an official capacity. She is the president of San Diego Surf Ladies.