Lest We Forget: 11 Reasons Californians Are Better Than Everyone 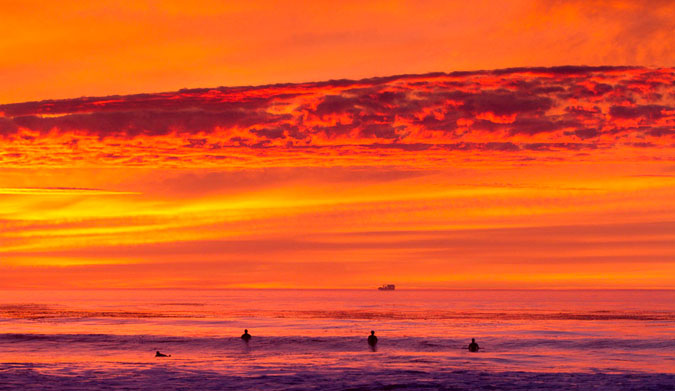 That’s a California sunset. Yeah it is. Photo: Paul Greene

We owe an enormous debt to Californians. They graciously and tirelessly serve as glimmering examples of human perfection.  This is such unanimously agreed upon truth that it seems featherbrained to even bring it up. Nevertheless, out of reverence and respect, here is a list of reminders why Californians eclipse everyone else everywhere for always in every regard. (Take this seriously and personally.) 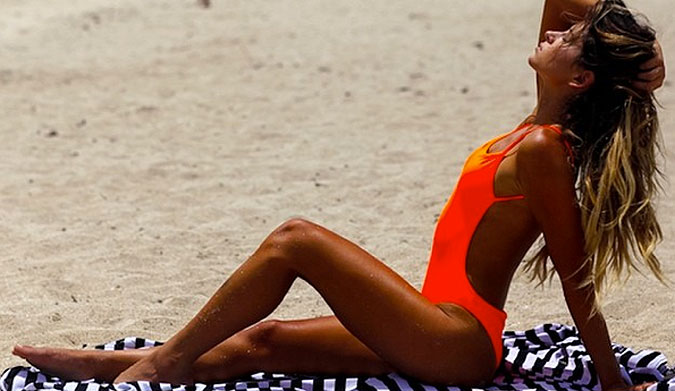 1. Californians are gorgeous. Every beautiful person on earth comes from or moves to California. If you’ve never dreamed of living in California, you are a liar, or consider yourself ugly. Which is fine. You’re probably beautiful inside. So are Californians. To gaze into the depths of their mettle is like looking into the Ark. Don’t do it. Normal folk can’t see God. It will destroy you. 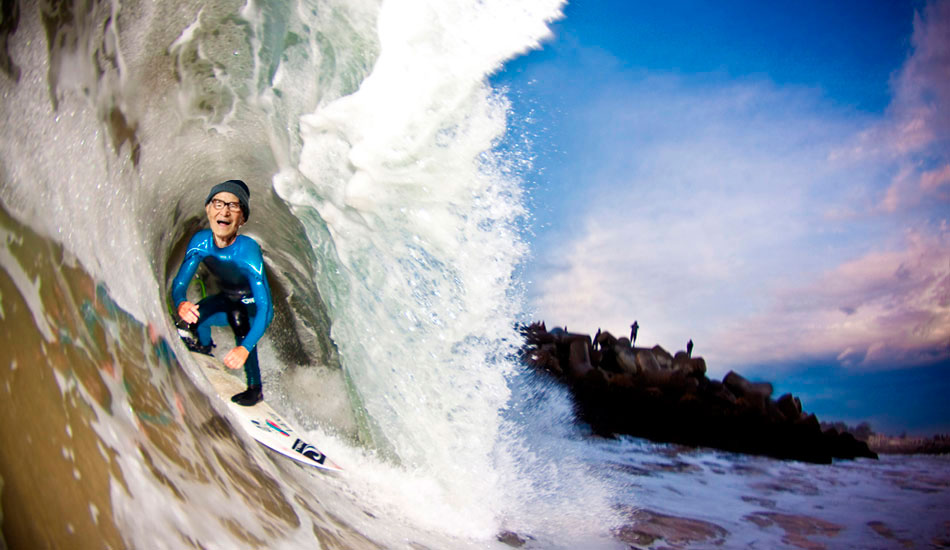 2. Californians live forever. They do so many kegels and eat so many anti-oxidants, that a staggering amount of the population is actually aging backwards. I knew a real bro named Benjamin when I first moved out to California who drank so much acai juice, he crawled back up into his mom and disappeared. They made a movie about it in California, starring Brad Pitt. Who lives in California. 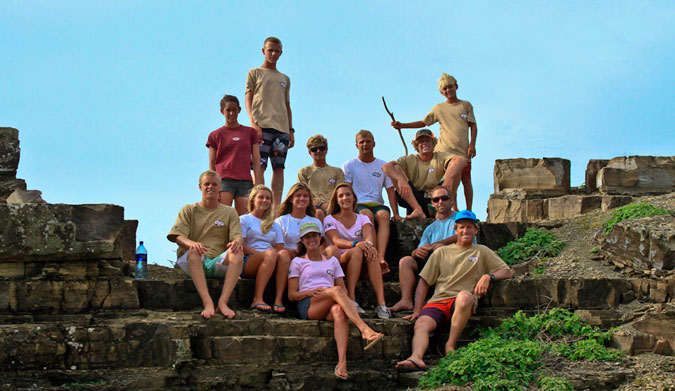 “What class do you have next period?” “Surfing.” Photo: Josh Jacoby.

3. Californians have surf teams at their high schools. Put that in your pipe and smoke it. Maybe that’ll hold you over until your state decriminalizes weed. 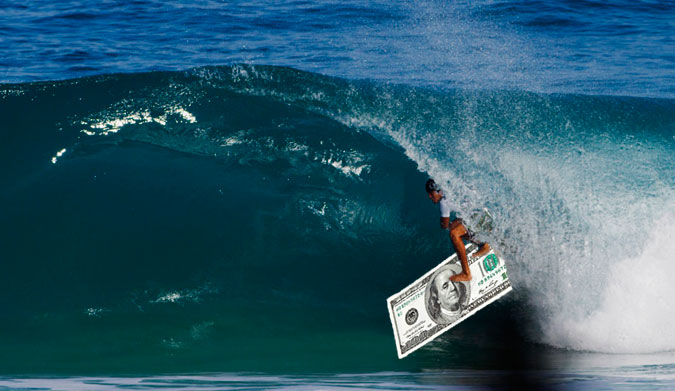 4. Californians are rich. Even the homeless shop exclusively at Whole Foods, wash their feet with alkaline water, and have a quiver of Firewires. If you don’t live in California, you are poor. 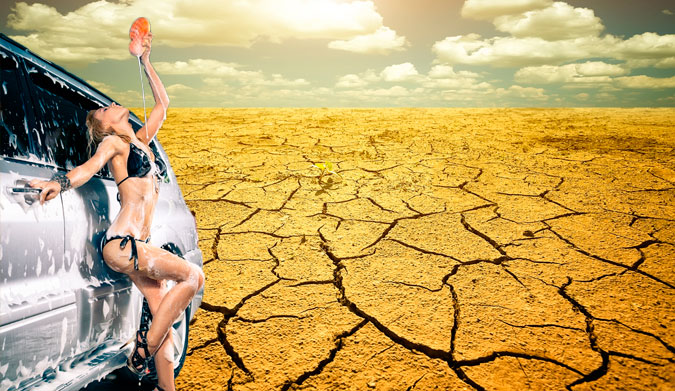 Don’t give a fuuuuuuck. Not even one. Photos: Shutterstock

5. Californians don’t give a single fuck. Governor Brown declared a drought state of emergency in January for the golden state because there is no water left. And Californians are still hosing off their sidewalks to wash away the money that falls from their trees every night. They are then still leaving their hoses on afterwards at full blast, all day long because the sound relaxes their french bulldogs. Californians manifest the existence of water through joyful indifference. 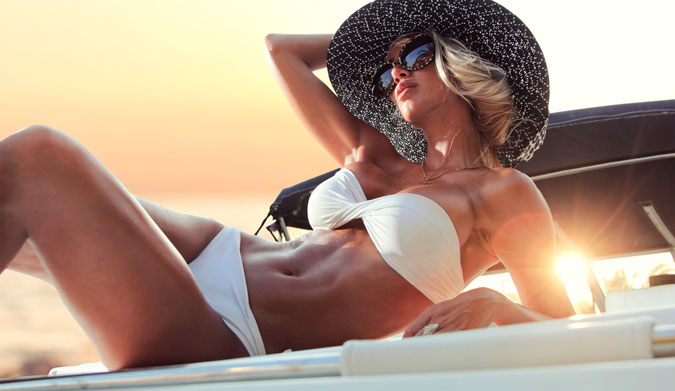 “Honey, can you pass me my kale smoothie?” Photo: Shutterstock

6. Here is an average Californian’s weekday: He’ll wake up with the sun, put on his coral reef safe sunscreen, and spend the morning perfecting his frontside air reverse while drinking fare trade kale juice, and snorting sprouted chia seeds.  Once the wind blows out his spot, he goes snowboarding for cause and grubs on some sustainably slaughtered carnitas tacos. He then heads home to tend to his biodynamic herb garden and blog about thoughts he almost had. That evening, he rides his electric skateboard barefoot to hot yoga, then leads a kiritan session while getting a strawberry colonic. Before bed he vaporizes some conflict free, artisan pot and has tantric sex with a supermodel in his California king bed with sixty thousand thread count sheets. He sleeps a full fifteen hours and doesn’t wake up once, having wet dreams about the life he currently lives. In the morning, the supermodel is gone, and he has a check in the mail for 50k from the state of California for being handsome. 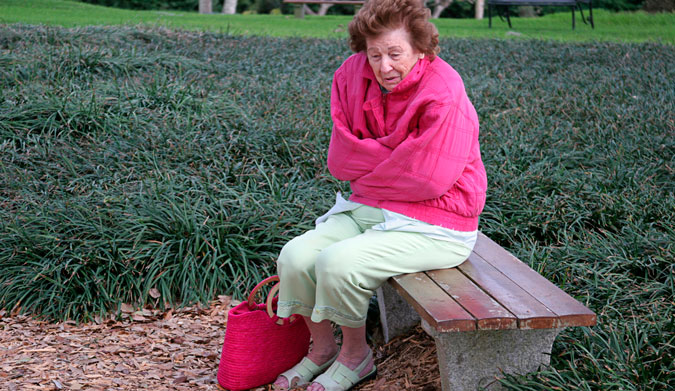 7. Here is an average non-Californian’s weekday: Who gives a shit? 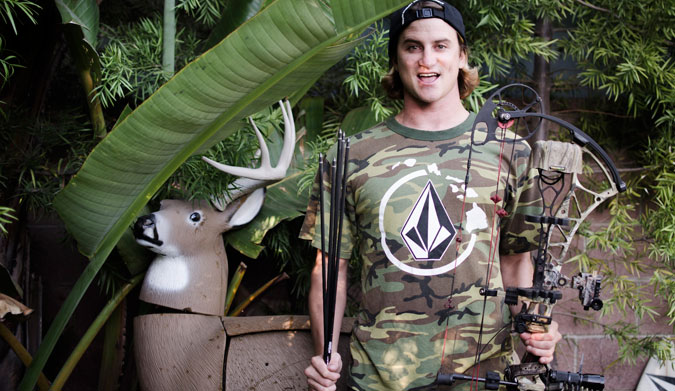 8. Californians have to kill the meat they eat with their bare hands. This is why a large portion of the State’s population is vegan. And why the other portion is ripped, spry, and primally centered. 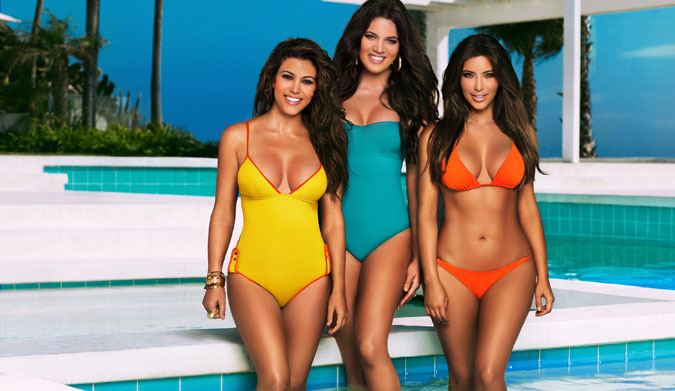 If you can’t do anything else, you can always be a reality tv star.

9. All Californians have the option, in a pinch, of having their super important and captivating lives filmed and made into reality TV franchises. It’s the State’s form of unemployment. 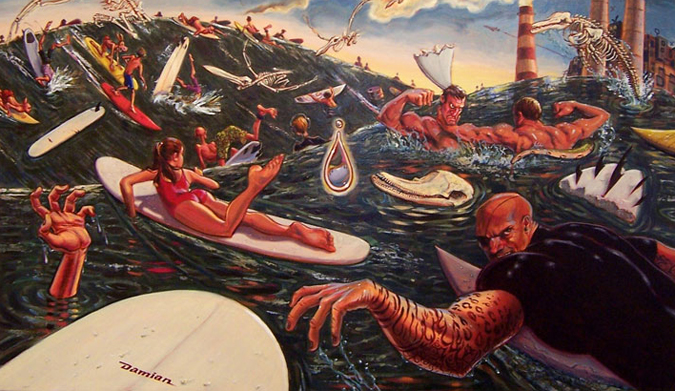 They’re all so sad because they are required to do this every day. Art: Damian Fulton

10. Californians are required to surf every day. Next time you are blessed with the opportunity to paddle out at a crammed California break, notice the amount of scowls and stink eyes. This is due to a State mandate that every single human in California own a surfboard and paddle out every single day. It isn’t required that they actually catch waves, but they do have to be sitting in the line up taking up space. It’s also required that Californians wear wetsuits year round, no matter how warm it may occasionally get.

11. Californians are selflessly selfish. They know that the world revolves around them and so make sure they’re the best versions of themselves. Which is actually, at its core, altruistic. It’s like on the airplane when they tell you to put on your oxygen mask first, then help the clueless, meek rest of the world sitting next you. Californians recognize their social burden as role models; their narcissism is magnanimous. How else would everyone know how to dress, look, eat, think, and carry on?