Life and Death in a Crowded Lineup 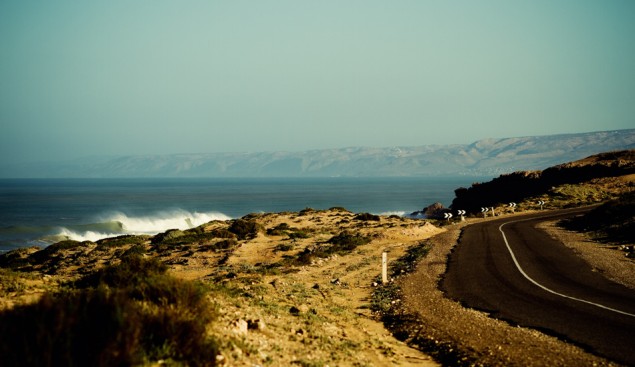 “Sorry, we’re the only ones surfing here today.” A Moroccan point that hasn’t quite been tapped. Photo: Javier Munoz/Pacotwo

On a Friday Evening in February of this year, at one of the most crowded North African Point breaks, twenty locals paddled out and respectfully but firmly approached the crowd of visiting surfers and told them: “We’re letting you know politely that only Moroccans are allowed on the peak tonight.” The implication was that the sanction would be enforced physically if necessary.

Three months later I dropped into a set wave at a long, iconic Californian Point Break and had three surfers drop in ahead of me. I figured that if I could get the backhand surfer immediately head of me to pull off I could deal with the other two afterwards, and began calling the nearest guy off the wave – but he wouldn’t pull off and jerked along in front of me ignoring me. His jerking and my need to make the wave stopped me getting near enough to gently shove him off. Afterwards I decided not to bother to challenge the guy, thinking that someone else would do so sooner or later – and in fact I heard him being harangued by someone over dropping in later in the same session. That particular Point – Malibu First Point – has a relaxed culture and a group expectation that if you are firmly called off a wave by someone who is going to make it, you do pull off. The culture at the break is self correcting.

But what if the locals paddled out and let people know, “Only Malibu locals on the outside take off spot tonight.”  What would happen?

I chose “Life and Death in a Crowded Lineup” as a title to draw you in to read this article. I hope the only life and death linked with crowded lineups will be the life or death of a successful surf session – but there have been beatings, court cases and severe injuries resulting from the tensions caused by the economics of the lineup.

Economics does not have to involve money. The word has a root in household administration – and lineups are households that can be experience managing and administrating – whether by the polite local tyrants of that Friday evening in Morocco or by the peer group pressure of a mature Malibu lineup culture. Or by a legal deal with local South Pacific Island Chiefs, or by public deference to the local macho heavy or heavies. Even by buying a ticket and waiting in line at an artificial wave pool. Lineups are run by varying principles, economic principles I’ve discovered.

Economics is “the science of dealing with limited resources that have alternate uses.” In the lineup, the limited resource is the waves, particularly the set waves. Five waves to a good set for example, fifteen minutes between sets, twenty good set waves in an hour, eighty surfers out on the break, fifty of them capable of taking off confidently on a set wave. Do the math: One set wave per surfer who wants one, means each gets a wave every two and a half hours. Does that figure? Have you gone out at a crowded quality lineup and got one good wave in a session?

So the limited resource is the set wave. The alternate use for that set wave? Well, it’s the surfers sitting around you; they could ride it instead of you.

Medics on a battlefield have to use economic principles. They, the medics and their tools and medicines, are the limited resource. The alternate uses are: medicate those that are going to die whatever happens, or save those who won’t die if prioritized, or help those who are likely to live anyway. The medics usually have hard choices to make. Free market economics applied on a battlefield means each man cries out for help as best he can and the medics decide on the spot, man by man, who to treat. Regulated market economics would mean the medics follow whatever market systems they’ve been ordered to follow: ranging from an extreme like “Treat all the local soldiers first” to a wise “Choose where you can do the most good most quickly.”

That Friday evening Moroccan lineup was a local attempt at regulating economic market principles. The limited resource of the main peak waves was kept for the locals, the visitors got the shoulder scraps. It was enforced and regulated.

Most lineups are not run on full free market principles, are they? Well, No! There is usually an acceptance of the surfer’s code: First person up nearest the breaking wave gets the wave, others pull off. No snaking. Surfers paddling out give the surfer riding space and paddle into the white water to let him ride if necessary.

Sharing the limited resources of set waves this way means everyone exercises self control and patience. Anyone acting like an aberrant, self centered, Prima Donna gets ostracized, called out, confronted, made to feel peer pressure and to get in line.