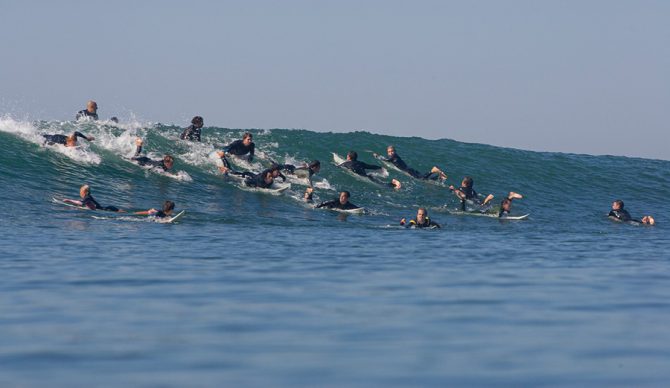 Does this look like Hell to you? Photo: JP Van Swae

Contrary to popular belief, the gates to Hell are located in San Diego County. And sitting at the northwestern tip of the county, just beyond those menacing flaming gates, is Lower Trestles – a bastardized blue pit of despair. Because, for as much credit as Lowers gets for being the crown jewel of high-performance surfing in Southern California, to actually paddle out into the madness can feel like Dante traveling through all nine circles of Hell.

You know immediately upon arrival that a great evil lies beyond those elevated train tracks. The message “THE SURF IS GOOD, BUT THE CROWD ISN’T,” is scrawled on one of the paths towards the beach, essentially serving as surfing’s version of “Abandon all hope ye who enter here.” Trestles, for its many flaws, is upfront about how terrible it is from the very start, and I appreciate it when evil places are honest with me.

Once you cross under the tracks, you have effectively left the purgatory of infinite privilege that is The OC and enter Satan’s nefarious underworld. But instead of fire, torture, and flying demons, you are met with the sight of one of the most divine waves you will ever see. The rippable right, perfect left, and opportunity to rub elbows with pros call out to the average surfer like a siren song. Once you see the wave and your imagination whirrs to life with possibilities, there is no going back – no repenting, no forgiveness. Only suffering awaits.

Sitting in the middle of The Crowd at Lowers is like trying to catch a wave inside a packed New York City subway car. You have to jostle and claw your way around a never-ending stream of aggro surfers to try to maintain a position – any position – for even a meager chance at latching onto one of these waves. Every surfer in that pack saw the same alluring wave that you did from the shore and lusts after it just like you. So, when one of those dream A-frames does appear, the pack moves in unison towards the peak, each greedily hoping for a taste of California’s greatest resource.

Logic would dictate that one, maybe two people at most should be surfing a wave at Trestles – but this is a fiery abyss where logic gets thrown into an incinerator. All nine circles of Hell simultaneously collapse into one with every breaking set, as every cursed person in that lineup is possessed with the belief that the wave is theirs and will stop at nothing to catch it. It’s gluttonous treachery on full display with snaking, backstabbing, and burning everywhere you attempt to turn. For all of its outer beauty, Lowers’ true heart beats to the rhythm of a violent street brawl.

The result is not the wave of your dreams, but an eternal amusement park for the damned – nothing but broken rides courtesy of clumsy serpents unable to hide their insatiable hunger for waves. And you too – angry, frustrated, and wishing you’d driven south instead – are now trapped in this brutal burn-fest.

The waves are too good to simply leave without a taste for yourself, so you must suffer through this mad lawlessness. The only way out is to blend in. Let the pack around you disappear into the background and allow the evil to envelop you. You too will begin to unleash your wrath on anyone who dares try to surf a wave you have incorrectly deemed yours.

Watch in horror as this wave transforms you into the worst version of yourself as you burn every last person there, laying waste to all of your newfound foes. You may feel momentarily victorious, until you realize that now you and everyone else surfing there are a bunch of empty, soulless frauds that care not about surfing, but about ripping one another’s heads off in a competitive feeding frenzy.

Just like Hell, the journey through Lower Trestles will drive a man insane. The wave is good, but the crowd really isn’t. All hail Beelzebub.