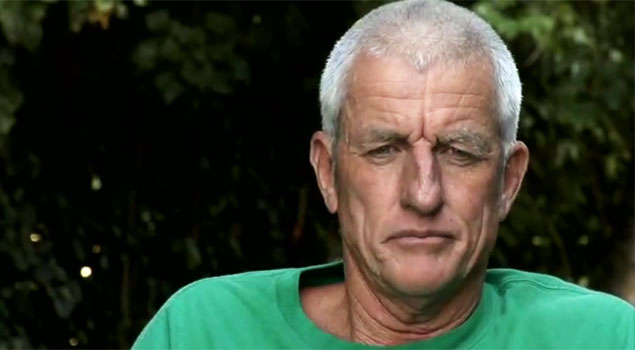 Like Lopez, Cunningham says bodysurfing Pipe is a cakewalk when you know how, but the best ride starts off on the right fin: “The key element is the takeoff,” Cunningham said in the Advertiser. “Too soon and you may go straight to the bottom and get crushed; too late and you’ll get pitched over the falls.”

Do it right and a good takeoff will set up a bodysurfer for a long ride in the middle of all that energy.  “I love long rides,” Cunningham was quoted in the Advertiser. “I get a wave at Pipe and ride up on shore if I can. You watch board surfers and they kick out early with their chest in the air. Waves are precious resources and that wave will never be there again, so ride it for all it’s worth. Waves are a terrible thing to waste.”

On a good day at Pipe there is non-stop action and a lot going on, but amid the best surfers in the world and all the crash boom bang, all heads will turn when Cunningham strokes into a wave, because he is a master of the art: Taking off high and angling to stay high in the pocket is the key to his style. Bodysurfers can’t as easily climb and drop for speed as surfers and the key is a Yin/Yang balance between falling and rising at the same time, but keeping forward momentum.

Cunningham has it dialed – falling and rising at the same time and getting speed in the crease. He bodysurfs in and out of the barrel at will and while he doesn’t really like doing spins, bellyrolls or tricks, sometimes will do the bodysurfing version of a floater when the end section comes over.

In America when someone retires from a distinguished career it is traditional to have a testimonial dinner. Cunningham isn’t much at talking about himself: “Mark is a huge goofball,” Chris Malloy said. “He loves to diffuse self -important surf rhetoric with a good fart joke. I love him for that!”

So instead of fart jokes, a number of surfers chimed in, in support of their long, tall, silver-haired waterman friend.

“MC is one of my favorite people in the world.  Just a simple guy whose got a huge heart, a lot of friends, and a gift in the ocean. I couldn’t actually write enough good things about him. He’s been a big influence on me as a person and definitely made my life better. I saw him as a kid and he was kind of bigger than life for being one of the few guys who would go out to Pipe solo on huge days. He’s the most humble, sincere person you could be friends with.”

“I remember having heats during big nasty Pipe contests. Even when you got spit out of a big tube you’d get spooked paddling back out. I remember Cunningham yelling from the ski in the channel: “GO MALLOY!!” It would be so comforting to know he had my back out there. when MC is literally acting as your guardian angel it makes the spooky factor go way down.’

“We all grew up bodysurfing but we were mostly whomping. Mark took us under his wing and showed us there  is a big difference between Hail Mary shorepound bodysurfing and the lost art of  Hawaiian bodysurfing.”

“I see Mark about four times a year. He knows me and he knows I love trinkets: old records. Old books. That kind of stuff. Every time I see him he’ll have a gift for me. It’ll be wrapped in newspaper. He’ll customize it. He remembers a conversation we had years before about some random bit of folklore and his gift will be some incarnation of that thing we talked about. Those little gifts are more special than a Rolex to me.”

“I first got to really know Mark at the Masters event in Ireland back in 2001.  A larger than life character, he’s always ready for a chinwag (yarn). He’s the true embodiment of  Aloha and good karma. Very much a patron of the arts, Mark regularly attends art shows and benefits all over the island and beyond. Put it this way, if you are going to an art showing, there’s a very good chance that you’ll run into him. He’s one of the most beloved and engaged members of the North Shore community. Everyone knows Mark. He’s the kind of person that you just wish there were more of about the place.

“Mark Cunningham is one of the purest watermen I have had the privilege of calling a friend. He was always such a calming influence in and around the impact zone at Pipeline, but he would still find space for a humorous quip even amongst the heavy going. He never strayed far from the zone.”

“Mark’s surfing skills are amazing and he was so nonchalant, the only time you would see him go into overdrive was to perform a surf rescue. On land Mark perpetuates the spirit of Aloha, he is just as inspirational on the beach as in the lineup, one of the true ambassadors for the brotherhood of surfing. All the best to ‘ya mate.”