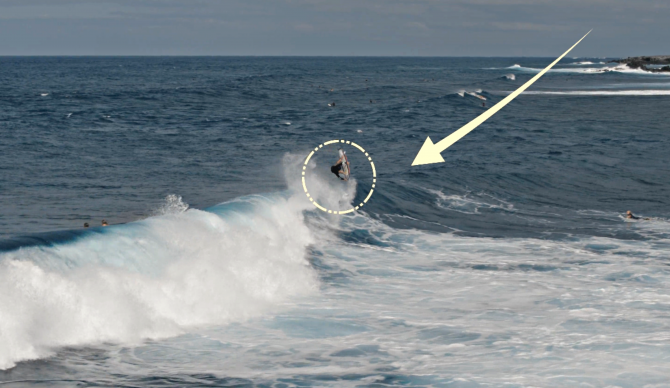 The right wind direction will keep your board with you and help you stick the landing. Photo: Screen shot.

Matt Meola is no stranger to some wild conditions growing up on Maui. The island is notoriously slapped with trade winds that blow for a majority of the year as hard as 36 mph, creating its trademark “Maui Glass.” And as one of the most innovative and experienced aerial surfers on the planet, Matt has learned a thing or two about using them to his advantage.

First thing’s first, “if the wind is wrong for an air, you may as well not try one,” Matt says in Matt Meola’s Guide to Aerial Surfing. “If the wind is blowing with you down the line, it’s going to take your board. As soon as you get in the air, it’ll blow it away from you. It’s nearly impossible to land airs when you have a strong wind from the wrong direction.”

When commitment to landings is key for mastering any aerial technique, your board being thrown out from under you will make the process unreasonably frustrating. For Matt, the work starts before the session to get ahead.

That sounds simple enough. But as with most weather patterns, you can have variations. And Meola’s experience has shown him how and when to adjust.

“Now, a straight-on, you can still do airs, and a straight-off, you can still do them, but it’s not ideal,” he tells The Inertia. “The best is a slight, either straight into it, side-on or side-off. That’s what you’re looking for. And whatever direction it’s coming from, you want to be going into the wind.”

Though Matt is known to push boundaries — he admits he might not be the best when it comes to safety tips — he also knows when it just isn’t worth the risk.

“As soon as it’s blowing at your back with you down the line, that’s just a complete no-go,” Meola says. “Don’t even try them. That’s how you get hurt. You can land on your fins. Just go out and do turns.”

Surfing 101 tells us that wind will affect the shape of a wave and how it breaks. This is universal knowledge. But Matt has an uncommon approach to looking for the waves he wants: he follows boogie boarders.

“You need to be able to generate speed, and the section you’re hitting can’t be too flat, or it’s going to give you no pop at all,” Meola says. “So you want something that’s steep and powerful. I’ve always liked waves that, if you watch boogie boarders and the waves they ride, they’re really wedgy, powerful waves. You’re looking for a similar wave that you see those boogie boarders ripping on where the power source is really strong.”

His internet-breaking spindle flip 540 (or 720, depending on who you ask), for example, was done at home on a steep, thick slab of a section back in 2015.

But unlike boogie boarders, aerial surfing relies on the right wind above the lip. So your three ingredients for the best air conditions, Matt says, are “steepness, power, and the right wind.” If these don’t come together, “the worst thing you can do is try to force a maneuver that the wave isn’t good for.”