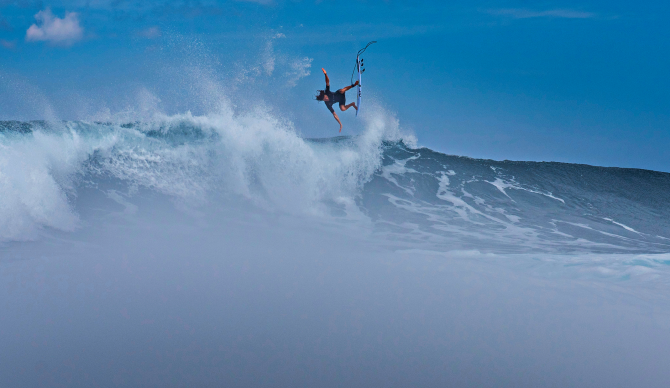 “It has to be where you take off on the wave and getting from A to B isn’t something you think about, it’s just something that happens.”Photo: Inspire Courses

Matt Meola will tell you he doesn’t think he should give other surfers advice on safety. His entire body would probably agree. His Devil-may-care style has wrecked both of his knees multiple times, it’s given him back injuries to recover from, and the list goes on.

But throwing caution to the wind is also the exact reason he’s pushed aerial surfing to new heights. And the truth is, all those cuts and bruises have taught him a thing or two about avoiding some serious cuts and bruises whenever possible. So where’s the sweet spot between progression and safety? Because injuries are inevitable in every discipline of the sport.

“Avoiding injury can be done, but then you start taking away from commitment,” Matt says in his new digital class with Inspire Courses: Matt Meola’s Guide to Aerial Surfing. To put it bluntly, “It’s finding the balance between commitment and ‘Is this just plain stupid?’ I tend to gamble with the stupid side a little bit, but I think that’s important if you want to do groundbreaking things.”

For those working up to where surfing above the lip is even a consideration, this all begins with understanding when you’re ready to start learning and attempting airs.

“Surfing has to become almost second nature, like walking or riding a bike,” Matt says.  “It has to be something where you take off on the wave and getting from A to B isn’t something you think about, it’s just something that happens.”

When you’re no longer thinking your way through a bottom turn or telling yourself when it’s time to do a cutback, Meola says you’re ready to start. From there you have to commit to each attempt, trying to land “absolutely everything.”

“Unless it’s totally dangerous,” he says, “or your board has flipped over in the air and you think you’re coming down on your fins, don’t. But if you’re over your board always go for the landing.”

From that point, there “are many things you can do to avoid getting hurt,” he says. “Taking your board away at the end if you think the landing’s just straight-up impossible (for example). The more commitment you have, I feel like the less you get hurt because you become so comfortable on your board.”

At this point, you start gaining awareness and control of things that might sound uncontrollable, like how you fall and how to avoid hitting your board if a fall is inevitable. It all becomes safer with commitment and reps.

“It’s just trial and error, and the more you just keep going for it, the more you might learn the hard way. But it’s important in becoming a safer surfer. You’re going to be less safe in the beginning. Once you’re very comfortable in falling in awkward situations, you start to get hurt less.”