Maverick’s Invitational Gets the Green Light 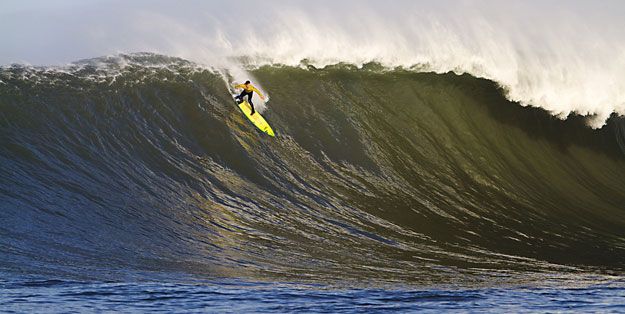 Maverick’s is on. It’s on and it’s legitimate Mav’s. A few days ago, a large red patch appeared on the charts and began marching across the Pacific, banging into Hawaii before eventually unloading into Half Moon Bay, California. And that’s today.

This year sees quite a bit of change from previous years. The cliffs at Pillar Point are closed to spectators – which, sadly, is because of that rogue wave that nearly washed away half of them in 2010. They’re now limited to watching the live webcast at home or, if they feel like shelling out $25, on a big-screen at a hotel north of the contest site. Maverick’s Director Jeff Clark says that the main goal is to become a contest that doesn’t need a sponsor; one that can support itself instead of trying to find a main sponsor every year.

This year won’t see Kelly Slater in the water, either. After pulling out at the last minute, it was announced that ASP Top 34 surfers can only compete in ASP sanctioned events. There are specialty sanctions which can be applied for, but this year’s Mav’s contest didn’t apply for one. According to a story on SFGate.com, Gary Linden, the man with the perma-smile and the one steering the Big Wave Tour boat, has been trying to have the contest sanctioned for months, but couldn’t because of the recent changes occurring within the ASP.

Check back later for a full contest run down.

So it’s Sunday, and Maverick’s is on. Click here to watch it, but leave your productivity at the door. And if that link doesn’t work, here’s another one that will. I’d hate to see you doing something productive with your day.