Meet Gearoid McDaid: ‘The Best Surfer to Ever Come Out of Ireland’ 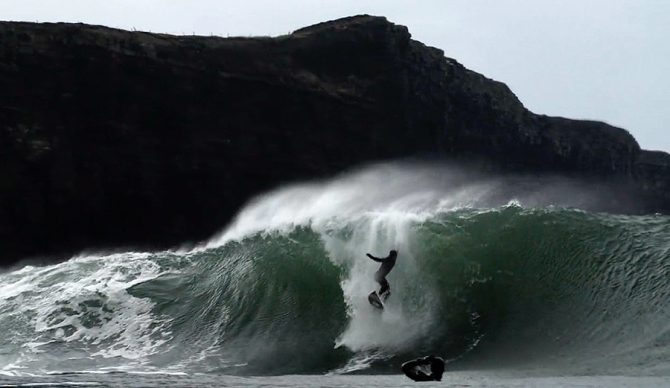 One of the author’s first memories of Gearoid McDaid was him choosing not to paddle out for a heat on a big day. As you can see, Gearoid grew out of that long ago.

My earliest memory of Gearoid McDaid was at a junior contest on the West Coast of Ireland. He must have been 10-years-old at the time, standing a mere four-feet tall. Even from that very beginning, people could tell there was something different about Gearoid compared to other competitors in his age bracket.

I then remember in 2010, at the age of 12, he competed in the open category of the Irish Senior surfing championships. The surf was big — double, triple overhead, adult size — with some rogue sets. Gearoid was still short, so the surf was double that for him. Before his heat, while I was chatting with Zoe Lally, Gearoid stood by the pier, frozen. Wondering what was wrong, Zoe and I went down to see. Gearoid was crying, embarrassed that he didn’t want to enter the water. With an arm around him, we assured him that no one is going to judge him for not entering the water. Hell, just earlier that day in my own heat I’d suffered a two-wave hold down and washed up on the rocks. To be honest, looking back on that day speaks to his level of awareness and sensibility, even at a young age.

But it has also left us all wondering, what the f**k happened?

Today, Gearoid is considered one of Ireland’s many bonafide hellmen. He’s no slouch at Mullaghmore, taking a drop from hell at Riley’s or even recently at a WQS contest held at a well known “Deathslab” in Arica, Chile. He drew influence from the likes of fellow local standouts like the Kilfeather brothers and Ireland’s biggest names in the underground pro circuit like Cain Kilcullen and Fergal Smith. So it was only a matter of time before someone grew up to fill their shoes and dominate.

So I want you to meet Gearoid McDaid, the best surfer to ever come out of Ireland and our 2020 Olympics top pick. Between touring the world and putting the Emerald Isle on the map to being a personal guide for visiting surfers like Mick Fanning and his most recent standout performance at the Padang Padang Rip Curl Pro in Bali, I managed to drag him away from a busy schedule for some insight into the life of Gearoid.

“Well, I’m just your average guy who happens to be a pro surfer from Ireland, traveling around doing contests and trying to score good waves,” he says.

When do you feel things finally clicked for you?

In the last two to three years I started to get real sponsors, being able to surf every day and not have to work at anything else. It’s pretty epic to be able to do what I love for a job.

You are currently traveling on the QS. How are you finding life being away from home?

It’s always nice to come home for a few days but I really do love traveling and doing contests. I travel with a few different groups of people — a couple of guys from England and a couple guys from Australia. It’s great traveling with a crew that all like doing the same thing as me.

You are currently ranked No. 175 on the WQS. How has this year been treating you?

This year started out really well with a 3rd in the first QS event but after that, I have had a bit of a shocker, which is why my rating is kinda low at the moment. But hopefully now in the next few upcoming contests, I can get a few good results and get up the ranking ladder.

The days after the Padang Cup, did you stick around for the mega swell that hit Indonesia and score?

Yeah, I stayed in Bali. I was hoping to go somewhere for it but ended up staying on the island. I ended up having a sick surf out at Padang, though it was kinda too big for it as there were some huge wash through sets. The in-between ones were mental. And because it was so big it meant it was pretty much empty, only like three to four of us trading waves, which was sick.

And you did a Rip Curl Search strike mission to Skeleton Bay, Namibia?

Yeah, I went to Namibia last year. I was in South Africa for a QS and saw the swell and decided that I couldn’t miss it. I was already halfway there before I got the call from Ripcurl about the trip. It was mental to be part of a Ripcurl Search trip like that. It’s a really cool place. Not what I was expecting. It’s actually pretty Americanized — more so than South Africa — which I found very weird (laughs).

You’ve surfed some of the best waves all over the world. What has been the session that stands out the most?

I’ve surfed some pretty crazy waves but you cannot compare it to an epic day at home. Hard to call a best session as there are always a couple every winter in Ireland.

What’s it like coming home after one of these trips to the other side of the world?

I always love coming home after a long trip and getting to surf epic waves with my friends. And I don’t have to deal with annoying locals like elsewhere in the world.

How do you like to spend your down time at home?

Pretty much surfing as much as I can, hanging out with all the boys, and trying to train a bit and not party too much.

Last question: How badly do you miss a Chicken Fillet roll when you’re away from home? (A feeling only an Irish person knows)

It’s pretty tough not eating chicken fillet rolls after every surf but it makes them better every time I come back.

This interview was originally published and conducted by Humans of Surfing.