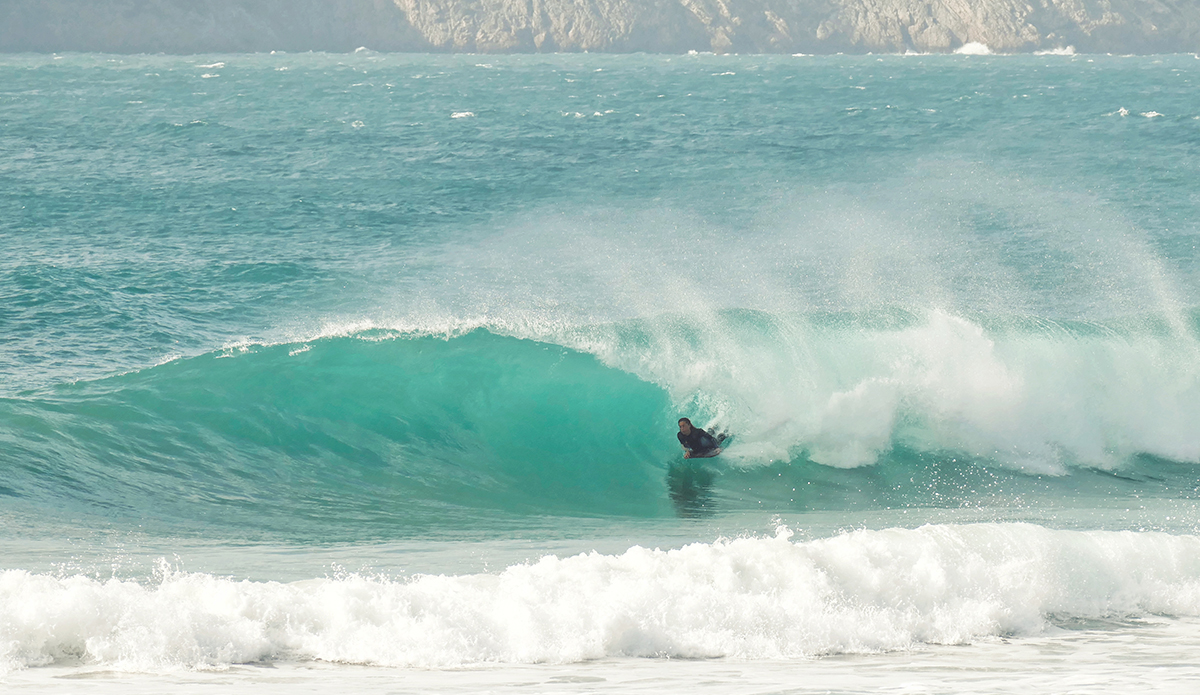 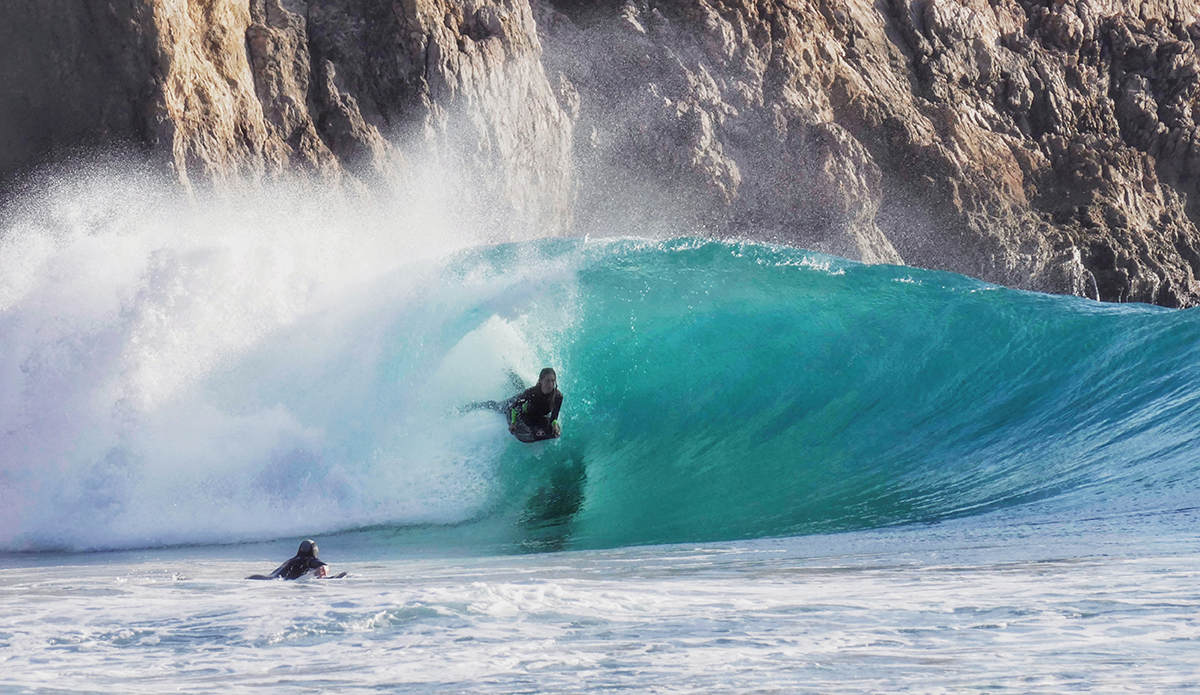 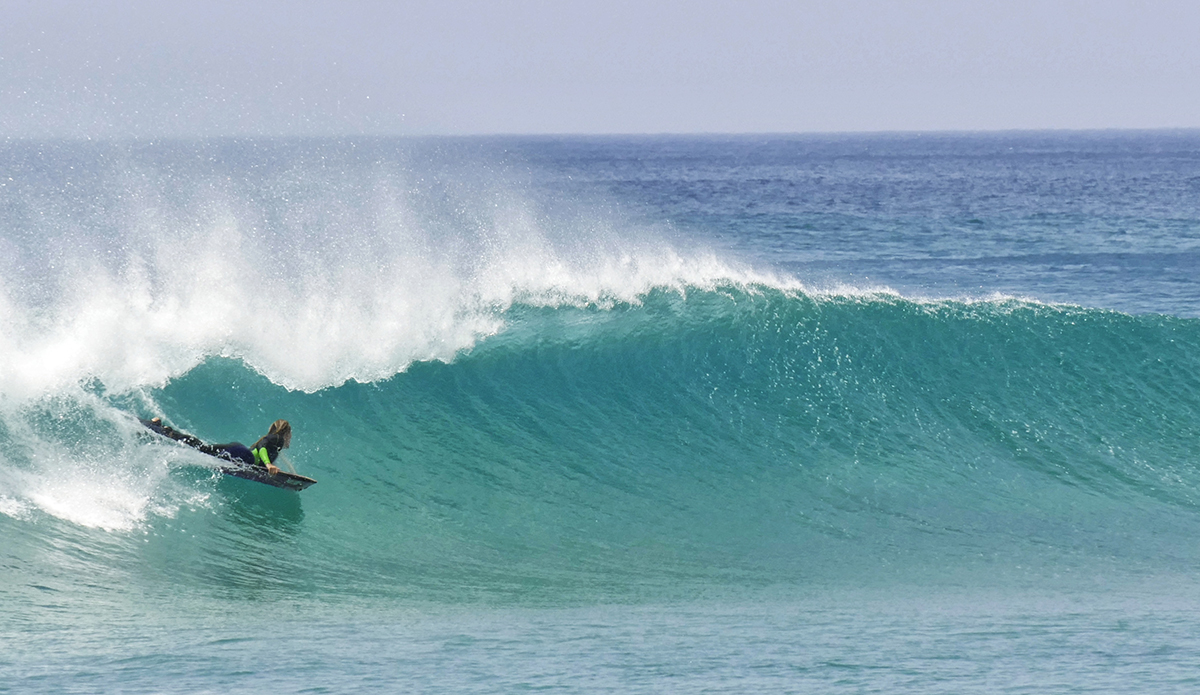 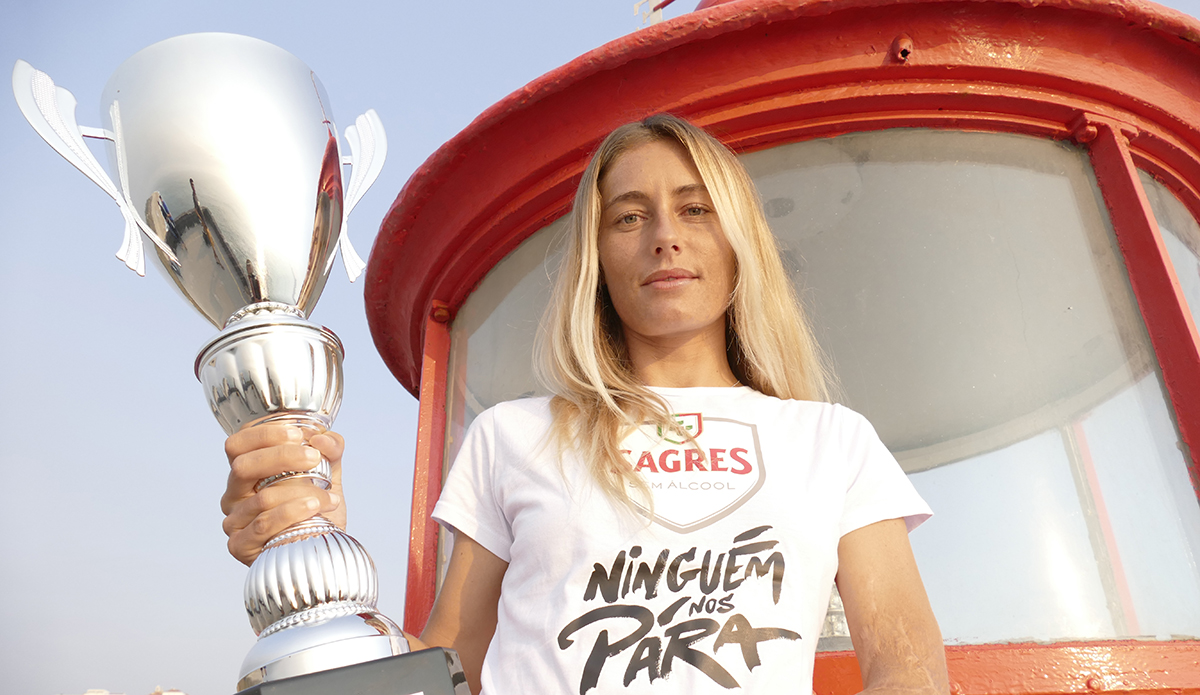 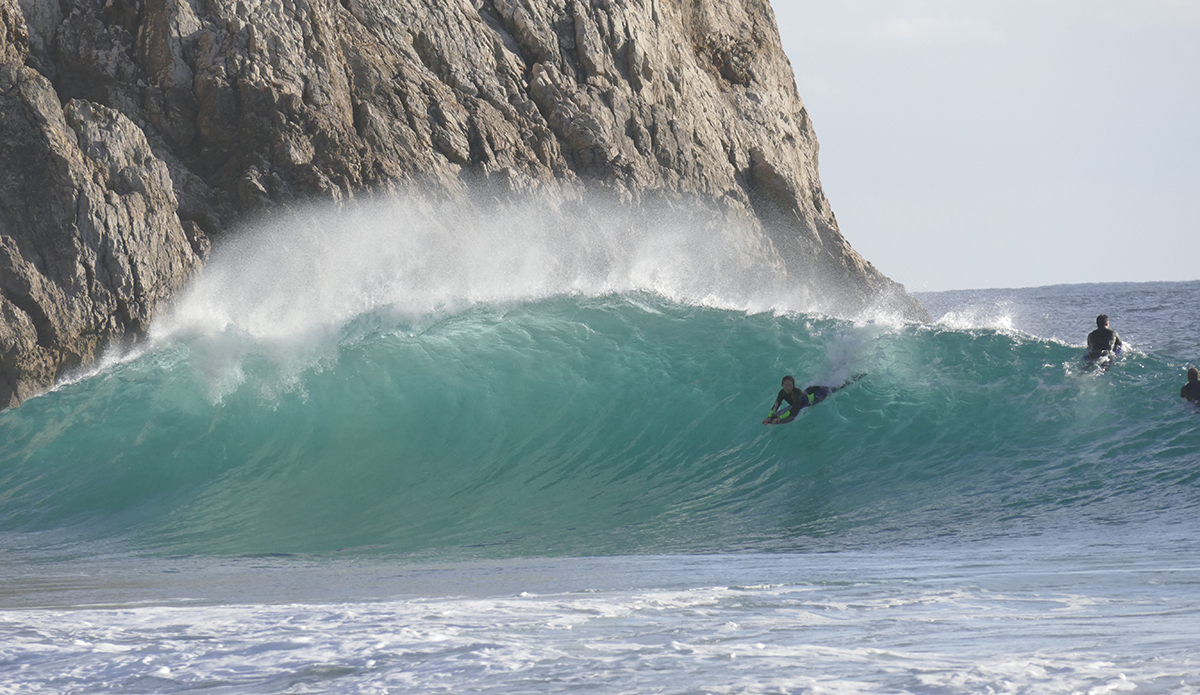 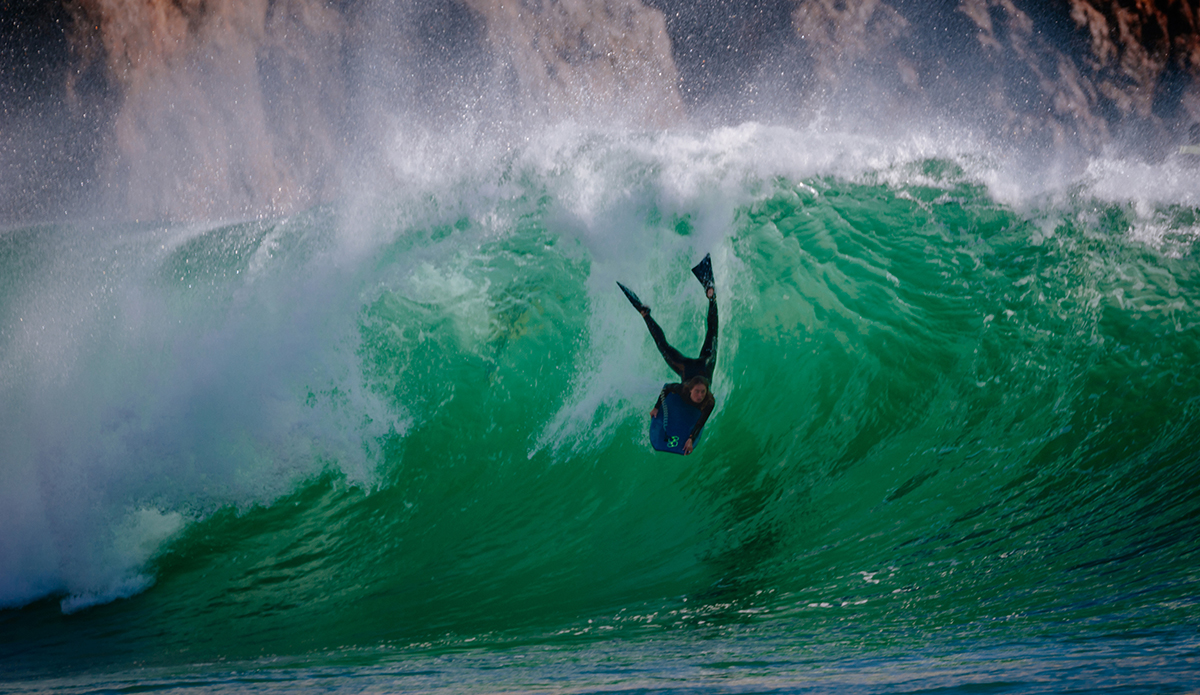 Joana Schenker is Portugal’s first world champion – surfing or bodyboarding. And while the world is just getting to know her, 2017 was actually the fourth year she locked down a European title, securing her as one of the best bodyboarders in the game. It was a crazy year for Joana, seemingly making her arrival in 2017 with both the world title, a GQ Portugal title, and all the hype that’s surrounded her accomplishments.

Where in Portugal are you from, Joana?

I’m from Sagres, which has one of Portugal´s strongest bodyboard communities. Almost every local rides a bodyboard.

My friends from school were already into it and when I tried it myself. I was 13 years old and I was hooked. Of course, I would look up to the good riders from Sagres, but also legends like Neymara (Carvalho) and Kirra (Llewellyn) were my early idols.

When I started, Neymara Carvalho and Kirra Llewellyn were some kind of superwomen to me. They shaped a whole generation of girls in bodyboarding. Rita Pires became a good friend and an absolute role model. Despite the fact, we were competing against each other all the time she always
helped me and pushed me to travel with the attitude of a real champion.

How long have you been competing on the World Tour?

I have been competing for a long time at a national and European level and won four national and four European titles consecutively.

I used to attend only the Sintra Pro here in Portugal. In 2016, I got a new sponsor that allowed me to finally compete in all events and things started to go pretty well from there, and at the end of the year, I ranked fourth, which I thought was a good result to start off 2017, only my second year doing the full tour.

Both women’s surfing and bodyboarding seem really strong in Portugal.

Yes, that’s true. Portugal has had one of the strongest women’s bodyboard scenes for many years now. Athletes like Dora Gomes in the early days, Rita Pires, and Catarina Sousa a few years back were all ripping on the World Tour. So we are not short on inspiration for the new generation that is now growing in great numbers. I’m sure the future of female bodyboarding in Portugal secured.

I think when there are a good number of women in bodyboarding or surfing it is just so much easier for more to follow. When I started there were at least eight girls already bodyboarding and it just made me feel more comfortable. Now, in Portugal, we have events just for girls to try bodyboarding and national and European tour events that are exclusively female. The media loves those events and we get a pretty good exposure. All this helps the sport grow and get more girls on board.

What supports and structures were in place in Portugal that helped you reach your full potential as a competitor?

I started out at our local bodyboard club. They made sure we had a ride to the beach and all my friends were training there as well. With them, I attended my first junior contests.

The Portuguese Surfing Federation works on the competitive side of the sport in Portugal, with no implication on coaching or training of athletes. That has to happen locally in the bodyboard schools and clubs around Portugal.

After a few years training with the club, my boyfriend Chico Pinheiro who happens to be a great bodyboarder also became my trainer and biggest support, he is super critical, always pushing me to do better, I think his input got me here.

What did it feel like winning your first world title on home soil in Nazare?

We had a long world tour this year: Brazil, Chile, Japan, three events in Portugal, Madeira, and Gran Canaries.

My title campaign really started in Japan, an event I was super excited about, and with a record number of girls competing. I finished fourth, a result that made me quite happy because the Japanese riders where surfing super strong.

From there the tour came to Europe. The Sintra Pro was the most important event of the year, all top girls came to chase the win. The victory in that event opened the door to the title, putting me in the lead in the rankings. Madeira was the next stop [which was] very important for being a double sanctioned event, so the European title was also at stake there. I ended up third and got the European title again.

When I arrived at the Nazaré event, things were looking good for me. I had a good lead in points, and for Alexandra Rinder or Isabela Sousa to keep the world tour race alive for the final event in the
Canaries, both had to advance to the final. That didn´t happen so the title was automatically mine.

It sounds cliché, but 2017 was the perfect year for me. Everything went my way and not only in competition.

I became National, European and World Champion in the same year, I was featured on the cover of GQ Portugal, which is a big deal. I felt so much support from the Portuguese bodyboard community, the crowd at the beach, and people on social media. I actually felt really relieved when everything was over and that I didn’t disappoint all those people.

What was it like seeing yourself on the cover of GQ Portugal?

The GQ cover was a crazy – almost a strange experience. The invitation came out of the blue, way before the world title, and it’s not really normal for them to feature athletes.

You are the first Portuguese world champion in either surfing or bodyboarding, so great news for Portugal. The media exploded around you.

Yes, that’s right. I´m so happy to bring it to Portugal. I really think with all the talent we have we already deserved a professional world title. The media went crazy over it. It was everywhere on the
news, on prime time TV. I got like ten covers in all major newspapers, I did countless interviews and went to speak on the radio shows. I never expected all this. It’s a little bit overwhelming and it’s still going. I honestly I had no time to surf since this hype started.

I think the GQ cover and the media from the Sintra Pro win kind of prepared the way for the media bomb after the world title. The newspapers were already more aware of the possibility Portugal getting the title.

I´m happy I could contribute in a positive way to my beloved sport, I do feel a huge responsibility to do my best in representing all of us athletes.

What is next for Joana Schenker?

Well, right now I only want to get back in the water and enjoy the winter waves at home. Next year,
everything starts all over. I will be competing for sure. But, I don´t want to set a fixed goal, I just want to surf better. I feel so motivated to evolve and just do my best when I´m competing.