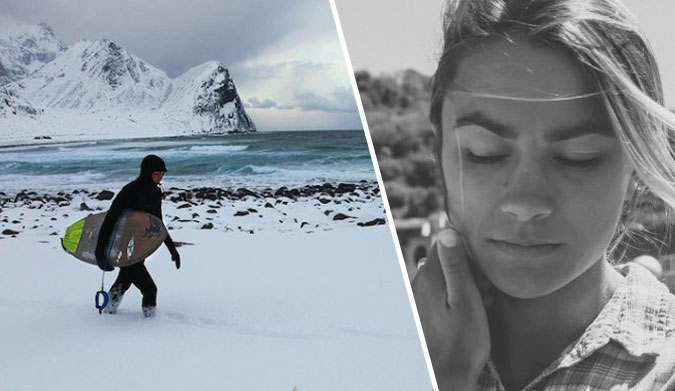 I found out about Léa not long ago. I knew about her because I began conversations with Patagonia about sponsoring some events, and just looking at their site, I found her. Then, some friends of mine wanted to interview her for their surf movie The Old, the Young and the Sea. That’s when I really started getting interested in her, so I started to follow her blog, Simple-Voyage.

At the very beginning, I thought she was like other surf girls. I thought she was doing surf trips and selling her image for media and sponsorship. Then I discovered she was the real deal – not only is she a hell of a surfer, but she’s a true sportswoman in every sense of the word. She embraces a simple life. This young woman is following an inspirational path of a modern-day nomad.

I had the opportunity to interview her while she was presenting a short film called Catch It by Sarah Menzies at the Surfilm Festival of San Sebastian, about the time she passed through the Lofoten Islands, Norway.

When did you do your first solo traveling and what was the situation that pushed you to do it?

My frist solo trip was probably at age 17 when I left to study one year in the French Caribbean islands to study tropical agriculture. It was at the end of school and I wanted to combine surf and travel. After that, my first solo trip in the van was to Portugal at age 19 just before I started nursing school. Then I went for a longer solo trip in New Zealand. I’ve always felt like solo traveling was opening me to more intense and genuine experiences with locals than traveling with friends… but that’s until you find the right person to travel with!

How is to be a surf girl and a nomad, traveling by your own? Have you had any difficulties or extraordinary experiences when traveling on your own?
It is awesome. People are curious of you and welcome you very easily, especially women. It’s lovely. I’ve never been in trouble being a girl on the road. I had to pay attention several times, but I’ve always preferred safety. The only difference with a man traveling solo is human behavior, and I’ve always been careful not to be in place I could not have help if I needed it.  And unlike any expectations, I’ve made amazing friendship with locals, men or women, that might not have happened the same way if I was not a girl by herself.

You’re very much a minimalist. Did your parents raise you like this?
I was raised in a minimalist way, that is for sure! But it was not any choice of my parents, or any lack of money or anything like that. The part of France I am from is a post-war backcountry area where it seems to be written in the genes that everything should be built strong and last. Before the war, it was a poor area, but after the war, it was even harder. I do believe it builds the minds for generations to come. I believe even though I’ve never suffered of any lack of anything, I’ve been raised to respect what I have. That’s why my girlfriends hate shopping with me and why my mechanic bills add up!

How did you met Sarah Menzies and what appealed you most of this project?
I randomly met Sarah on the beach up there. She was with a common girlfriend. It was a little lonely at times up there and I was so happy to see a young lady doing stuff; good stuff, and smiling that much. Her project did touch me deeply since she was so interested In my lifestyle and it gave me lots of confidence to talk about it. She brought an amazing energy along and I loved it.

Do you have any projects in the works?
I’ve just been back from Iceland were I was with my boyfriend Vincent Colliard on a self-supported surf and ski trip. I’m going to work on a short film about it. Hopefully in San Sebastian next year! 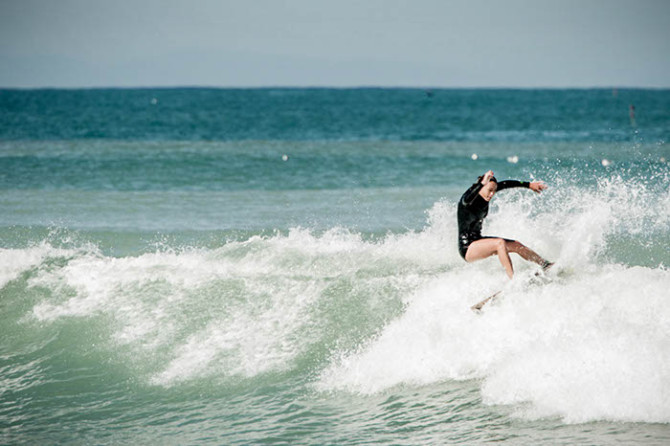