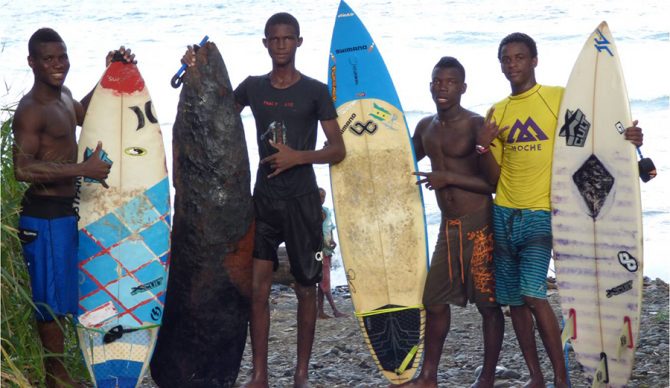 São Tomé e Príncipe is an archipelago in the Gulf of Guinea, precisely under the Equator just off-shore from Gabon and Equatorial Guinea. It comprises two beautiful islands, São Tomé and Príncipe. In the early 2000’s, when the first western surfers – Randy Rarick, Sam George, John Callahan and two Portuguese surfers, Nuno Jonet and Tiago Oliveira – arrived in São Tomé e Príncipe, they realized that there were already surfers in the main island, São Tomé. They found children having fun on the water, riding the breaking waves on wood planks, often prone, but occasionally also standing up.
When these western surfers went home they left behind their foam surfboards, maybe without realizing at the time that they were planting seeds that would grow. São Tomé was starting to become a surfing destination, although discreet due to its isolation.

Seven years ago, three Portuguese surfers – Pedro Almeida, Paulo Pichel and Miguel Ribeiro – arrived in São Tomé to work, and brought surfboards along. They started to lend their surfboards to the local kids, kick-starting the surfing evolution that has allowed four communities of surfers to develop: Santana, Porto Alegre, Ribeira Afonso and Praia Melão, comprising at least 50 regulars surfers. They are young kids with ages ranging from 10 to 22 years old, who display an incredible amount of stoke combined with a remarkable friendliness, a common characteristic of these people.

There are at least eight known surf spots here, all in the southeast facing coasts. The spots are mainly right point breaks like Santana and Voz da America (named after the Voice of America Broadcasting Station nearby ) close to the capital São Tomé, and Porto Alegre to the south. The surf is fairly consistent all year, mostly in the 2 to 6-feet range. Located under the Equator the water can be 30º C (or more).

With the development of surfing came the opportunity to organize an annual national surfing championship. More than the competition, this event allows the kids to get together and share experiences.  Last April Santana held the 4th annual São Tomé e Príncipe National Surfing Championship. Just south of the capital of the main island, São Tomé, Santana is considered the best wave of the island. It is a right point-break in front of a lush cliff. The waves were in the chest high range with the occasionally larger set.

This event showcased São Tomé’s surfing talent, with representatives of all the surfing communities. The winner was Jéjé, a 17-years old kid from the village, who dominated all the heats, displaying a wave knowledge and a portfolio of maneuvers as good as any kid his age, in places where surfing is far more developed. The runner-up was also a local kid, Laspik. Although the four top places (went to surfers from Santana ( Jéjé, Laspik, Danilk and Preto), the other communities contributed also with standout’s like Chum from Porto Alegre (and probably the very first surfer from São Tomé) or Edu, from Praia Melão, an “electric” kid with a big smile and a strong potential.

So what’s the next step for São Tomé’s surfing? The ideal would be the presence of a two or three surfer team in the VISSLA ISA World Junior Surfing Championship to be held in São Miguel Island, Azores. There, these young surfers will surely display some of the best surfing that is coming out of Central Africa. But mainly it will allow them to watch and learn with some of the best junior surfers in the world, and will contribute to São Tomé e Príncipe’s surfing to reach a new level. It will also certainly promote São Tomé e Príncipe as a surfing destination, and in this way help the local kids to develop a more complete lifestyle around surfing, as surfing instructors and guides. 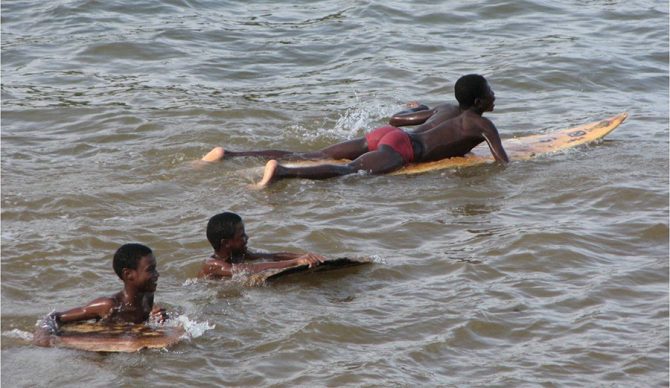