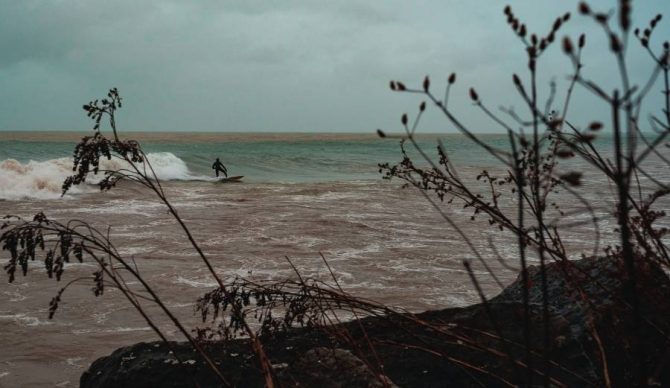 Lake Michigan can provide fun waves for surfers and kiteboarders, but a new policy is aimed at mitigating danger for swimmers. Photo by Alex Simpson on Unsplash

In June, the Michigan Department of Natural Resources Director Dan Eichinger proposed banning entering the water on so-called “Red Flag” days, when waves are three- to five-feet or higher, and conditions are deemed “dangerous.” The proposed order, if passed, would go into effect this August.

Currently, swimmers and water-sports enthusiasts are only “recommended” against entering the water on Red Flag days. The proposed order would prohibit anyone from exiting “the state-managed beaches for the purpose of entry into the water when entry is prohibited by signage and/or communication by a department employee or their designee.” The penalty for disobeying the order qualifies as a state civil infraction and carries a fine of up to $500.

On Thursday, the proposed order was opened for public comment. According to The Detroit News, quite a few residents, surfers, and kiteboarders have spoken out in opposition, and there has been no public comment in support of the motion.

Eric Little, a Great Lakes kite surfer, opposed the measure, saying that while water enthusiasts support measures to keep people safe, “this isn’t the way to handle it, to steal everybody’s freedom to enjoy these Great Lakes.”

“To our knowledge, there has never been a surfing related drowning on the Great Lakes. We are aware, however, of multiple lives that have been saved by the perilous efforts of surfers,” The Great Lakes Surfer’s Journal said when asked for comment. “We see that limiting ‘swimming’ in certain conditions during seasonal populous influxes could potentially save lives. In any regard these limitations should not be imposed on surfers who are frequently a crucial asset to drowning prevention efforts.”

Meanwhile, officials of the DNR are saying that this order would merely be used as a tool to assist park officers in maintaining beach safety.

“This land-use order would really be a tool to assist staff when there are safety concerns we’ve been made aware of,” said Nicole Hunt of the DNR’s parks and recreation division. She suggested that the order could be used to close dangerous portions of a beach during Red Flag days, leaving other, less dangerous areas open for swimming or surfing.

Commissioner David Nyberg suggested the department consider other ways to provide advanced notice of dangerous conditions to those intending to enter the water, instead of banning such activities completely, suggesting that providing “alerts or notifications to those who are accessing Great Lakes beaches, may be a way to mitigate some of the limits on public access.”

The motion is not without statistical merit. According to data from the Great Lakes Surf Rescue Project, there have been 40 drownings this year to date in the Great Lakes. In 2020, there were 108.