That’s Mick Fanning. He’s talking about a brand-spankin’ new (to the public) sand-bottom right that according to Rip Curl “measures five kilometers long, breaks 20 meters from the beach, holds six feet of swell, and has only been surfed by four people on the entire planet.”

In a day where every rock feels turned twice and each path well worn, the concept of stumbling upon actual empty perfection seems as unlikely as building a perfect, artificial wave. They’re both preposterous.

Until they’re not. Welcome to a glimpse inside three-time World Champion Mick Fanning’s mind as he comes to terms with surfing a perfect, barreling right point – much like his home break Snapper Rocks. Except completely alone.

“First couple waves, I was thinking, “Is this wave too fast?” said Mick Fanning. “Then I finally got one, and it was just like, alright, here we go… I wanted to catch EVERY SINGLE WAVE, but I didn’t want to miss the biggest ones, so it was hard to paddle over these perfect chest high, perfect runners. Any other day, you’d go that wave. But because there’s no one around, you’ve got to make sure you wait for the bombs.”

“Surfing by yourself you can’t sit where the line’s going to be or where it’s going to come in,” said Fanning. “I missed a couple waves because of that, because I was too far out or I was too far in.”

Unfortunately, not an issue we can relate to very well.

“It’s just speed management, man. That’s all it is. I feel like an F-1 Driver. The waves that I’ve seen here…I’m coming back for sure. I feel like I got a real appetizer. We’ll be back.”

Wonder if he’ll ever be back alone? 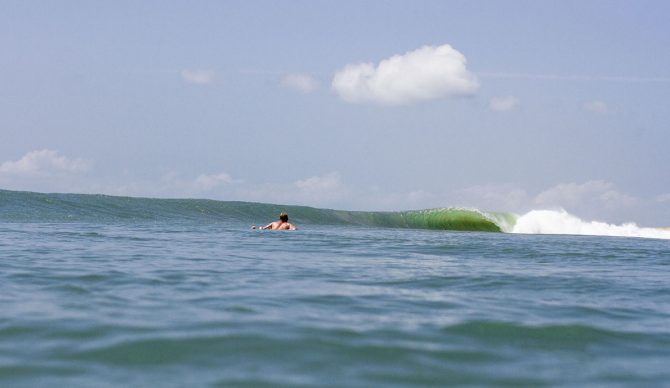 This is what the paddle out looks like. Photo: Rip Curl