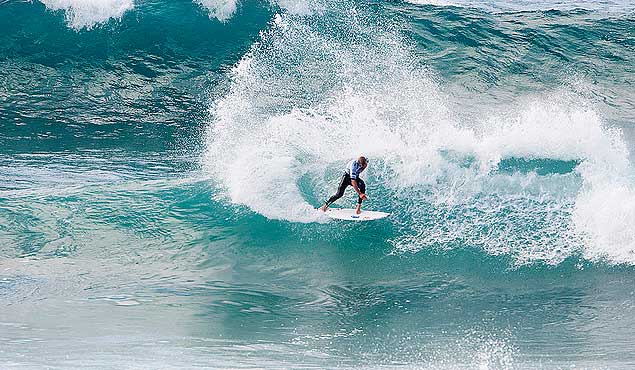 White Lightning turned up the heat in France to take out the field and take home the big check. Photo: Quiksilver

Good god, this is why I love the World Tour. Forget about industry woes, controversies, or “transition years;” this is the time of year when the title race gets interesting.

Right when you start to get comfortable with King Kelly, Mick Fanning dethrones him. Mick’s been Mister Consistent all year long, posting only one score lower than a 5th (a 9th at Lowers). So it really was only a matter of time before Fanning took a win, and he did it at the Quiksilver Pro France (for his fourth time).

Mick already has two World Titles from 2007 and 2009, and we all know how many Ke11y has. So what’s the difference between Mick’s hat trick and that awkward looking Ke12y?

As Slater took a fifth in France, he sits in second place–6,000 points behind Fanning (which is equivalent to the difference between 9th and 1st places). On top of that, Jordy is twice as far behind as Slater (12,200 points) and Taj Burrow is 12,500 points behind first place. So, Mick or Kelly would have to stumble pretty hard to avoid getting away with it.

With only the Rip Curl Pro Portugal and Billabong Pipeline Masters left, it’s going to be a good ol’ fashion shootout coming down the stretch. Both guys have a single win in Portugal under their belts, but Kelly, a six-time Pipe Master who last won the contest in 2008 might have Mick beat as he has never won in Hawaii.

It can’t get much more exciting than this. Mick Fanning with a lead and momentum heading into the last two events, Ke11y hot on his heels trying to take him out. Sport doesn’t get any better than a duel like this as surfing’s best attempt to de-throne The King.