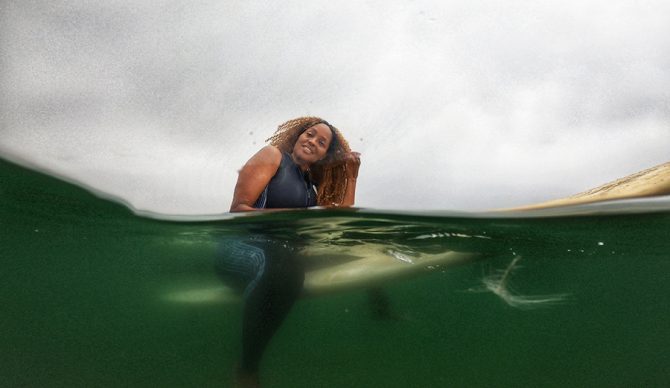 Mimi Miller’s surfing love story started in the back of a garbage truck. A mobile, converted-into-a-pool garbage truck that would park in her Detroit neighborhood and hook up to the fire hydrants every summer. It may not have been the Pacific, but swimming in it was enough to get her hooked on the water, and enough to set a journey into motion of founding the first Indigenous Beach Culture Film Festival some 40-years later in Los Angeles.

Perhaps it was her West Indian roots, but Miller knew the bitter midwestern winters weren’t for her. She became obsessed with the sun-kissed appeal of the world of surfing instead. Devouring any and all surf-related documentaries and movies she could find (according to Miller it’s currently around 500 titles), she quickly noticed one recurring thread: a white surfer exploring an amazing break with Black or indigenous children in the background. Always present, but never involved.

“After a while I just felt sick. Like why is it always like this?” she asks. “Sometimes they would give the children a surfboard, sometimes they’d set up a water filter – some kind of giving-back element – but the intentions to me were always for their own agenda.”

When she finally picked up her own surfboard at age 44, catching her first real wave at Huntington Beach after half a year of bodyboarding, she noticed it in real life, too.

“About six months in (to learning to surf) we were walking out, and I saw two Black surfers going into the water,” Miller recalled. You can hear her getting hyped again from this moment that happened seven years ago. “I took a picture with them! I’d never seen Black surfers before.”

Miller put her picture on Facebook, and a friend saw it and suggested she join an online surfing community, the Black Surfers Collective. Her first meeting with the group, at Dockweiler Beach, was on a warm Sunday afternoon towards the end of Summer.

“I remember getting out of my car and seeing them and I just started running down the hill screaming,” Miller laughs. “I was so excited. There were 10 Black women, 30 Black men. It just opened up a whole different world to me.”

She made sure she kept in touch with the women, and they met up to surf and hang even as it turned to winter and the ocean became colder. But even though she’d found comrades in her new passion, she still didn’t feel comfortable on the beach as a group.

She channeled these feelings into Indigenous Beach Culture days, where her and her friends met and celebrated their heritage with foods, music, dancing, yoga, and surfing. More and more BlPOC surfers found her through social media, and her movement grew into the Indigenous Beach Culture Film Festival, that premiered in October 2020 in Los Angeles’ Leimert Park.

Her goal for the festival is to explore and expand what Black surf culture means to Black people, and to normalize BIPOC people loving the beach and the sun. Above all, she wants a place everyone feels included.

“I still feel BIPOC people are having to walk a certain line of acceptance. I still feel Black surfers are not completely comfortable expressing themselves,” she says about the surfing culture today. “I want to build a festival that shows our culture, that helps Black surfers break into the scene and get sponsorships.”

The festival featured 10 short films from Black and brown surfers, such as Hunter Jones and local up-and-comer Marikah Burnett, and Miller poured through submissions from all around the world. The movies were separated into four categories – documentaries, action cams, narratives and experimentals – but all with the same thread: to break the paradigm of how surfers are depicted.

Miller is dreaming big for the future of her baby. She envisions rows of tents housing Black and Indigenous surfers signing posters of themselves. Prime real estate on Redondo Beach with a stage set up for Reggae bands. Dancing until the sun sets into the horizon, and kick-ass documentaries normalizing Black people at the beach, soaking up the sun and chasing the swell.

“You know I still meet people here who have never seen a Black person with a surfboard,” she says. “There’s still Black families who are afraid of water or can’t swim. I want Black and Brown children to watch these films to see there’s a different world out there.”