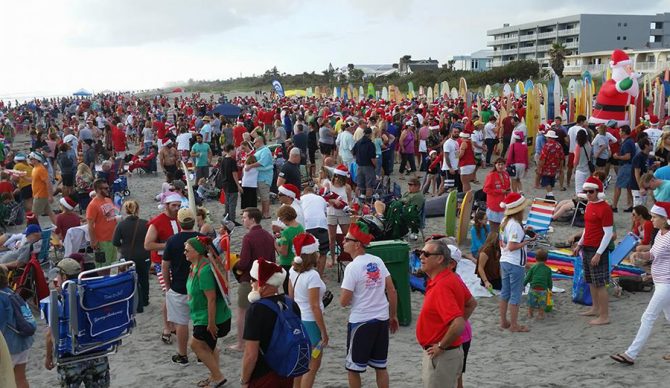 At first glance, the 837-75 score appears to be a blowout of epic proportions. This was the actual disparity of Surfing Santa participants for respective events held in Cocoa Beach, Florida, and Australia’s Manly Beach. However, a closer look reveals a victory for both sides of a friendly rivalry that was sparked this holiday season: the Cocoa Beach contingent crushed its previous records and the gang from Sydney successfully started a new holiday tradition.

Getting a head start thanks to the time difference, the Aussies stirred up quite the red (and white) tide at Freshwater Beach just north of Manly. The inaugural Sydney Santa Surf event drew an impressive 75 surfers dressed in Santa Claus rash guards, showing holiday spirit and sharing waves. Even 7-time world champion Layne Beachley joined in on the action.

Organized by Robin Vandekreeke, local surfer and co-founder of The Rashie Company in Sydney, the special holiday event was actually fueled by a challenge from the seasoned Surfing Santas outfit from Cocoa Beach. The crew from Florida, led by its founder and “Chief Fun Officer” George Trosset, endeavored on its 9th annual celebration. What’s matured into a Christmas Eve observance in Kelly Slater’s hometown, Surfing Santas Cocoa Beach has expanded each year (exponentially the last few). The groundswell of support comes much to the delight of the organizers and its benefactors, the Florida Surf Museum and Grind for Life, an organization that provides financial assistance to cancer patients and their families when traveling to doctors and hospitals.

Turnout numbers aside, if the real goal was to have fun and put smiles on people’s faces, Vandekreeke says mission accomplished. “It was incredible to have 75 ‘Sydneysiders’ bring their Christmas cheer to Freshie,” he exclaimed. “We can’t wait to see how many we get next year.” 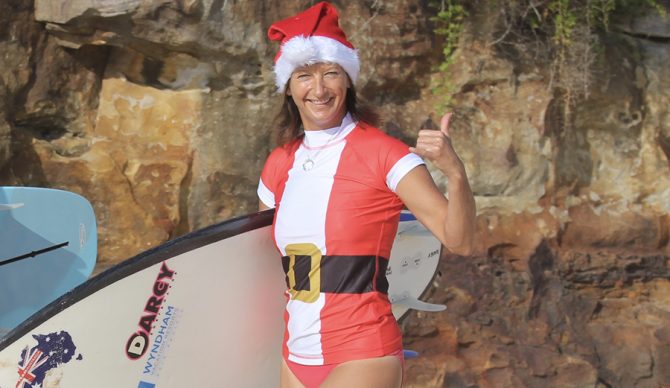 Seven-time world champ Layne Beachley is up for a global Surfing Santa challenge.

From thousands of miles away, Trosset extended congratulations to Vandekreeke and acknowledged the success of the Aussies’ first run at it. “We might lose our grip on the most Surfing Santas pretty quick,” he said.

When the time rolled around to see what Cocoa Beach was going to bring to this year’s party, the results didn’t disappoint. In addition to to the more than 800 surfing St. Nicks, the estimated spectator count was close to 10,000. I can attest to that number as I was forced to park more than a healthy hike from all the festivities. Most importantly, Trosset confirms the event raised more than $30,000 for the local charities.

Looking out the back, 1,000 Surfing Santas in the water isn’t out of the question for Cocoa Beach in 2018 and for Sydney in the near future. The more, the merrier.