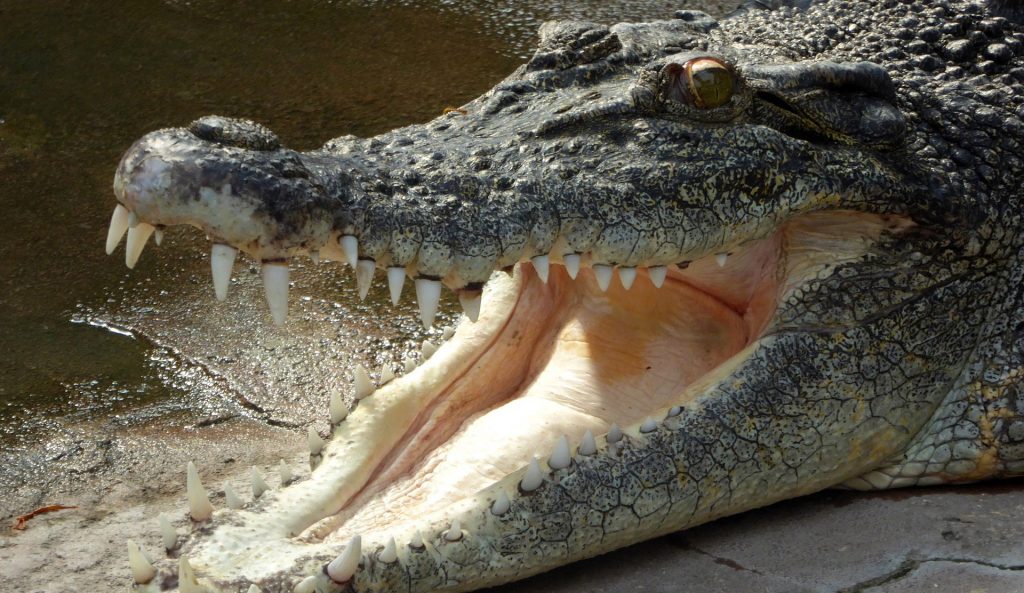 Well, which way will ya have it? Croc or shark? Photo: Pixabay

Remember last year when a surfer had his leg chewed by a croc near Tamarindo, Costa Rica? And remember thathe battled the beast despite having half a leg and the croc’s mouth wrapped around his face? He was an internet hero for a few hours – but for much longer in my world.

Well, it seems like the crocodiles are moving in, vying for the column inches that have been dominated by those sharky media whores.

It has been reported that large crocodiles have been spotted in the line-up at Puerto Escondido. A pair of crocs (not the rubber shoe variety grandad wears with socks) was spotted in front of the lifeguard tower at Zicatela this week. One of these creatures was estimated to be at least 10ft long.

Local marine biologist, Ana Banda, has said that whilst these crocodiles have been known to be in this area in the past, “the population appears to be increasing.” She went on to warn that “we as surfers have invaded their space, and they are a somewhat territorial animal.”

And so this has prompted me to consider the ugly, but thankfully hypothetical, question: If you had (HAD) to face down Colin the Crocodile or Simon the Shark in the line-up, which would you choose?

Let’s look at your options.

If you happen to come face to prehistoric-knobbly face with Colin, what are the best case scenarios? Well, for a start there are comparatively few crocodile versus surfer encounters to reference. Obviously, the recent example I mentioned at the beginning is hideous, but when you put it in context of Simon the shark’s extensive and gory record of misdemeanors, then it doesn’t look so bad.

Colin’s cousins also tend to prefer rotting meat rather than the fresh stuff, so unless you live in a Byron Bay squat and are shy of personal hygiene you’ll probably be alright.

In terms of temperament, we’d probably have to give Colin the edge over feisty Simon. I mean, Steve Irwin got away with tormenting crocs for years without major incident, so they must be bloody patient.

At the end of the day, if Colin does get you he will be hunted down, slaughtered and turned into shoes and bags and no-one will give a whistling shit. There will be no aching Facebook laments from Captain Paul, and your death will be rightly avenged.

The argument against Colin? Well there are the death rolls (note what happens to the young man’s arm). Otherwise, Colin might wedge you under a rock, to ripen and rot. Your body is unlikely to ever be recovered and you get none of the prestige of dying by shark attack.

And let’s be real: Colin is a prehistoric monster. He is fucking terrifying. If he attacks you he isn’t being a nosy bastard like Simon. No, Colin definitely wants to eat you. He will not bite you and run away. He will hold on for grim death (yours, not his).

Finally, what is the tactic when faced with a crocodile? I would reckon that going all Fanning on his scaly ass is likely to earn you more injuries than it would cause him.

So what are your best case outcomes with Simon? Well, you probably won’t see him coming, so there’s less time to savor the crushing fear of impending death. He’ll hit you hard, he’ll hit you fast. If you’re lucky his razor sharp teeth with sever your leg/arm/torso and you’ll either bleed out quickly or have a nice clean amputation for the docs to handle.

It is also likely that Simon suspected you were a seal. Perhaps he will get a mouthful of Hypto, decide that it’s not for him, and mosey off, depressed.

Kelly Slater might recognize your mutilated corpse with an Instagram tribute, which will get more likes than the sum total of your social media existence before it disappears into virtual obscurity a few minutes later. I might be prompted to write about how much of a pain in the arse sharks are, again.

Against Simon? Well, if you did see the fin it would be utterly terrifying. Jaws had such an impact that to this day I bet you could jump into a swimming pool anywhere in the world going DO-DO-DO-DO-DO-DO-DODODODODODODOD and people would shit themselves.

There is a better than fair chance that Simon will kill you dead. And there is an even greater chance that more than one crusty sea shepherd will flick a lank fringe from their eyes and dismiss your tragic death as “your own fault.”

So which would you prefer? Colin and Simon are waiting!