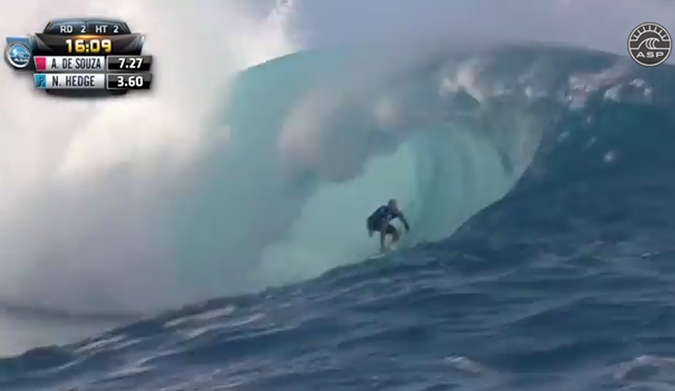 It’s not Kelly Slater, it’s not the world title race, it’s not Michel Bourez’s defense of his home break. The story of the Billabong Pro Tahiti is the return of Nathan Hedge. After a fine start to his professional surfing career, he dropped from the WCT’s Top 45 in 2006 and was relegated to grind it out on the WQS.

Despite his recent lack of competitive results, he’s back. Red Bull documented his return in their “21 Days” series where they juxtaposed his preparation for Tahiti against Michel Bourez’s. See it here and here and here.

Just yesterday, his preparation paid off as he took off on an absolute bomb in his Round 1 heat against Adriano de Souza, netting him the event’s first perfect 10.

Below, Nathan Hedge talks about his return to professional surfing, what’s important to him, self-worth and getting back in the swing of things at what he deems the most important wave on tour – Teahupo’o.

Catch all the live action at aspworldtour.com when the Billabong Pro Tahiti resumes.