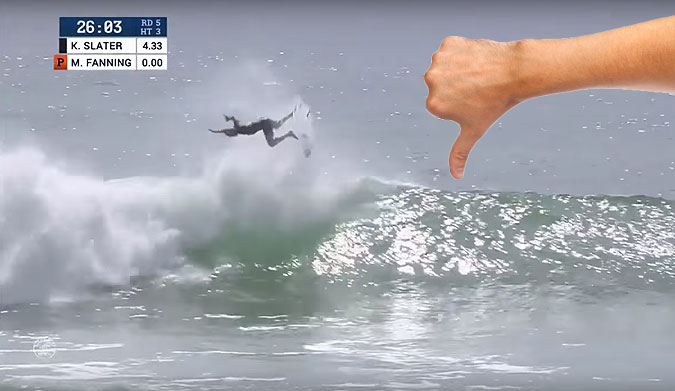 I think at this point, all of us who have seen Kelly’s wave have an opinion. Some say it was an unfinished maneuver. Others are flabbergasted that it was scored so low because, well – come on – that shit was impressive. And that begs the question: why was it impressive? I would argue that it’s because each of our brains just didn’t expect him to complete the wave. In the neuroscience world, this expectation violation is referred to as a prediction error. Given the circumstances, the brain predicts the most likely outcome. It’s theorized that this is how we learn and how we make decisions – in the water, in the classroom, and even in how we interact with people. Given the circumstances, the brain arrives at the most probable solution. In terms of scoring waves (and as briefly mentioned in my last article), this is how 10s are scored – given the conditions, the judges assume probable ways a surfer will surf. If the surfer’s performance deviates from what judges predict in an interesting way, that surfer gets an excellent score. And their brains (and ours) incorporate this new outcome into expectations for what future performances are possible on similar waves.

I’m not a judge and I understand that judges are operating under the WSL rules of completed maneuvers. But, if we operate under the brain’s judging criteria – in terms of expected and unexpected outcomes – I agree with Sam George: it’s expected that Filipe will fly down the line, huck a similar air as the last one he landed, and land it. Especially at Trestles, this is a highly probable outcome. I’m not saying it’s not impressive and shouldn’t be rewarded, but should it be scored more than two times what Kelly showed us in a performance that is an ‘n of 1’ – a complete outlier? Outlier performances typically get 10s, not 4s. Outliers make the brain adjust its idea of what is possible. Sometimes in one shot. For example, we all burned our hand once on the stove when we were little and our brains immediately put that in the “Avoid” column.

I would argue that Kelly’s wave re-sets our expectation bar as viewers and opens a new question for the judges and the WSL: when does an expectation violation in our brains overrule the speed-power-flow-innovation rules of WSL judging? Kelly’s wave wasn’t just entertaining, it was a complete performance anomaly, as well as an anomaly for all of our brain expectations – and probably his own. Without our brains, we wouldn’t be able to surf, judges wouldn’t be able to judge, and the WSL wouldn’t be able to make the rules. So, if the body’s ability to surf is dependent on the brain, our ability to perceive and watch surfing is dependent on the brain, and the judge’s ability to judge is dependent on the brain, why not incorporate the brain’s judging criteria into the traditional WSL’s judging criteria? It typically takes outliers to reset the rules and this may be the perfect time to do so. If nothing else, it’s brain food for thought.