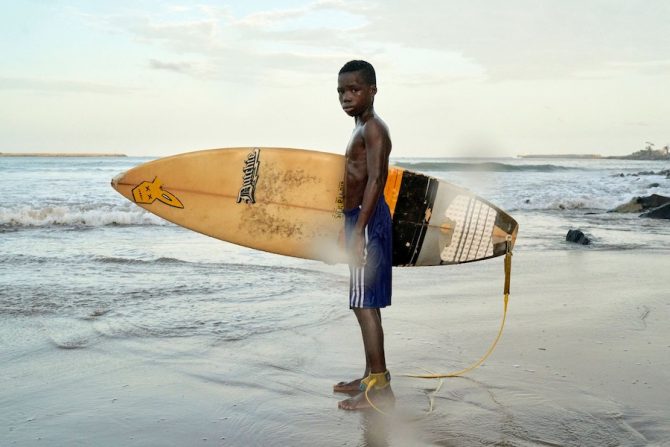 Proceeds from the book are going to help the burgeoning surf community. Photo: Oli Hillyer-Riley

It’s easy to read about tragedy in the news then quickly move onto the next story. You’ve likely read about the forced evictions of the people of Tarkwa Bay at gunpoint.  It’s brutal and for those who have spent time on the island surfing with the locals, it’s not the end of the story.  The beautiful photo journal No Wahala (No Worries) is now available with proceeds going to help the rebuilding of the surf community there.

While a glimmer of hope shines, the pain still lingers.

“Like a punch to the gut,” says Dylan Graves as he describes hearing about the violent removal of thousands of Tarkwa Bay citizens by the Nigerian military in late January.

If you’ve seen the Vans’ Weird Waves video series, you know that Dylan zips around the world in search of exotic surfing experiences.  In the latest episode, he and Dane Gudauskas rip apart a perfect right-hander in Tarkwa Bay, an island off the coast of Lagos, Nigeria. The locals shared waves alongside the Tarkwa boys with photographer Oli Hillyer-Riley capturing light-hearted play in the water and on the sand:

The surfing community there has thrived in recent years as the locals possess a thirst for surfing equal to anyone’s. Their gracious smiles and genuine willingness to share waves surely seems at odds with the overwhelming poverty that tortures the island.

The recent mass evictions left Tarkwa residents scrambling for any boats that would take them off the island. Many were left cradling their few possessions on the beach, sleeping on jetties. Bulldozers came in soon after to level most standing structures.  According to the Nigerian government, the island of Tarkwa is a haven for oil smuggling. Residents say that the government is making room for new development – which does not include them.

So, how did the crew respond after news of this displacement took place?

“It was only a couple of weeks after we launched the episode,” Graves explains. “I felt really weird about it. But I had people writing to me saying that it was a good thing to show how much the community benefitted. The episode encapsulated the magic that was had, and hopefully continues to be had, there in the future.” 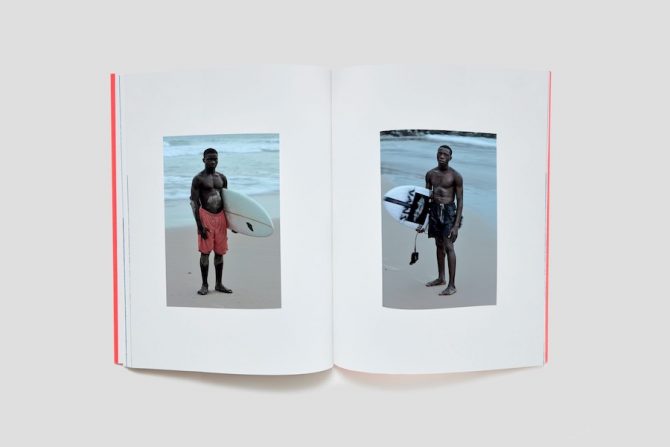 A sneak peek at the book.

It’s tough to say if the Tarkwa Bay community and young surfers will be able to return, but efforts are being made to support that. Photographer Hillyer-Riley gathered select images taken from the Weird Waves trip into the book No Wahala (No Worries).  Proceeds from the collection will go to charities designated to help the citizens of Tarkwa Bay. The images capture the joy of Graves, Gudauskas, and the locals surfing, smiling, and simply enjoying the waves.  While all surf trips bring about good memories, the specific experience during his time with the Tarkwa surfers stands out, and Hillyer-Riley is more than happy to give what he can.

“Dylan described the surf community as ‘going back in time to the infant state of surfing’ and quite honestly he’s hit the nail on the head,” Hillyer-Riley says. “We’re talking nothing but pure joy and excitement from that rush you get when you catch your first wave. The vibe in the water was special, it was the camaraderie from hooting and cheering each other on to the younger members of the community dancing and clapping on the beach when someone caught a wave.”

He also describes his initial thoughts when he knew he needed to do more than just share waves. “This is an area of the world where violence and crime is a common day to day occurrence with majority of the Lagos population living off five dollars a day,” he said. “If that doesn’t put into volumes the hardship that people face out there, I don’t know what will. It really struck me when one morning I had a young member of the community sitting next to me when I was taking photos from ashore. No one was about other than myself and the rest of the crew in the water and when I asked the child why he wasn’t in school, he replied ‘I can’t afford it’.” 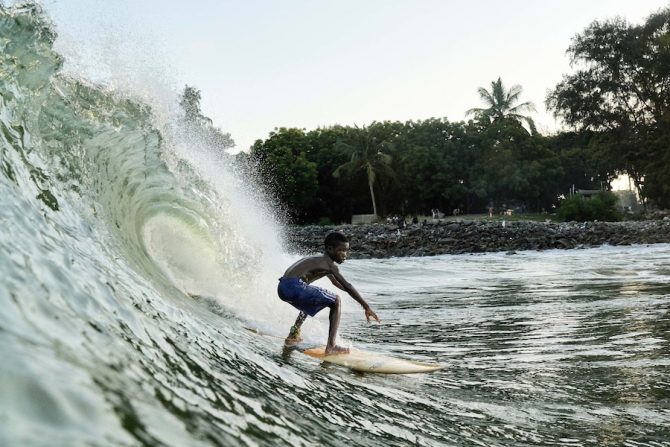 Getting pitted is for everyone. Photo: Oli Hillyer-Riley

“After seeing the state of the boards they were using and the specific comment of one member saying he couldn’t afford school I wanted to do something to change this if I could,” Hillyer-Riley continues. “Subsequently I was speaking to Dane out in the water and he told me of Positive Vibe Warriors foundation he and his brothers, Pat and Tanner, run. He told me of what their cause is and how they’ve helped surf communities worldwide. From this moment I turned my attention to documenting my experience with this specific community and of course the surfing, but I wanted the viewer of the photographs to feel the connection I felt.”

Hillyer-Riley says that the experience and the knowledge of Tarkwa Bay’s destruction has changed the way he views surf travel.  “Since the trip to Nigeria, I can’t help but look at things differently.”