If there’s a lovelier athlete in the world than Carissa Moore, I’ve yet to meet her. Authentically humble, intensely competitive, open, and honest, she isn’t just another face in the pro surfing crowd. She’s a genuinely good human. She’s a lover. And all of these things are eye-poppingly evident in her new film, RISS, from director Peter Hamblin (the man behind Let’s Be Frank). The footage was basically captured in one surf trip and during several events on the world tour as Moore painstakingly works to secure her fourth world title and an Olympic berth. No spoiler here, she does both, but whether its Hamblin or Carissa, the film actually makes the process look quite enjoyable. Despite being set in Hamblin’s quick-hitting, narrator-fueled style, RISS gives us a closer look at Carissa’s relationships than we’ve been given before – and one thing is perfectly clear: the woman gives out a whole lotta love and receives nearly as much in return. It’s a feel-good opus at a time when we need feel-good more than ever.

How’s this whole quarantine thing gone for you?

I can’t complain. I’m home in Hawaii and it’s probably one of the better places to be in the world right now. Next week they’re going to open up the malls, things are looking brighter. I get in the water every day. I’d go insane if I didn’t have that. My routine really hasn’t changed much. It’s made me realize how much of a hermit I am, back in the valley where I live. Everyone’s schedule has changed one way or another. I’m coming to terms with not having anything to really plan for so I’m staying present and enjoying the moment.

Where do you stand on all the craziness?

I’m pretty naive. I’ve stuck myself in my bubble. The news is so negative. I’m gonna do my part, go to the beach, go home, try to be aware as much as I can. I wear my mask, wash my hands. I also feel if we all do our part we’ll be able to get on with life somewhat normally. I just focus on the few things that I can. 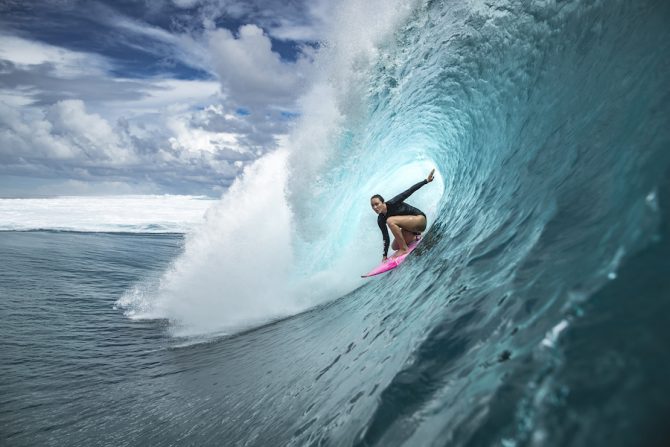 Carissa Moore can do this as well as any woman on tour.

There’s kind of a lot in the movie about your feelings on being interviewed? What’s your idea of a perfect interview?

I guess it’s more just having someone who’s a good interviewer so it feels like you’re having a conversation that makes you feel comfortable and you can speak your mind. So you have a conversation with that person instead of it being super structured. I like interviews when the interviewer asks good questions and when the person is interested and has done their research, knowing a little more about you. I guess I don’t like it when I know I’ve answered a question a million times.

Ha, okay I’ll try not to take that personally. Is there ever a feeling in those post-heat interviews where you’re like, “I can’t say anything because I’ll give away my competitive secrets.” It’s just that we don’t get much as fans from those.

Sort of. There’s times and places for certain answers. I’m not going to expose all my vulnerabilities in a post-heat interview when I’m in the vicinity of my competitors. I don’t want to give away all my strengths and weaknesses. I’m okay with opening up about certain things.

Okay, so let’s get to this cool film project. When did you guys come up with the idea for a biopic?

Talking to Peter Hamblin the director, this project wasn’t really what we had in mind. We had a script and site set on a more long-term project. But then this year happened and we got backing from Red Bull. It reflects the friendship I built with Pete and I really trusted him and opened up to him.

Did you help him write the script?

I can’t take much more credit other than I did some surfing and I’m a goofball, really. It was Pete’s vision and how he sees the world. I saw his movie Let’s Be Frank and it was so different and so entertaining: it had surfing and a balance of so much other stuff. With this project, I wanted it to be different, I wanted it to be something people outside of surfing could relate to and appreciate as well. I had a lot going on last year. I would have loved to do one or two more performance surf trips. I only did one trip really, to Tahiti, and Pete came for a swell in Hawaii. That was it.

With this whole Michael Jordan documentary in the news, it made me think of having cameras follow you everywhere for an entire season. Is that how it was for you?

The people involved totally had my trust and an understanding of how I work. There was never a huge crew. Most of the time, Pete was filming with his camera with some of the footage coming off an iPhone. I didn’t feel like it was a huge deal. 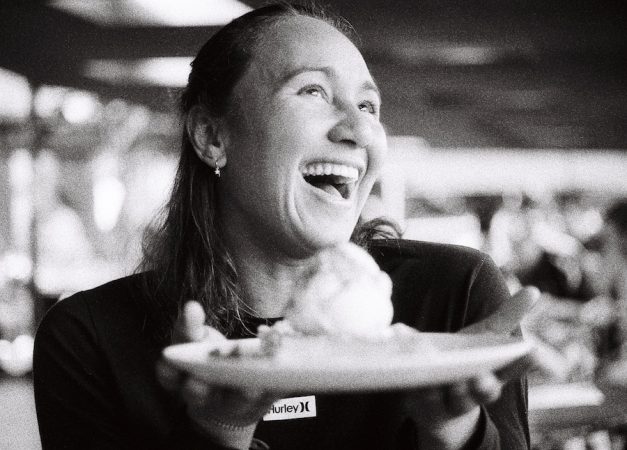 There might not be a brighter light on the pro tour these days.

So you’re happy with how the film came out?

Honestly, I’m beyond stoked. I thought Pete did an exceptional job. I couldn’t have asked to work with a better human or more talented filmmaker. I couldn’t stop smiling when I saw it, he made it look so rad, the way he interpreted everything. There’s an ice cream scene of me and my coach Mitch (Ross) talking. He did a voice-over of us where we’re at a comp talking about strategy and he placed a conversation about getting ice cream over it. It was brilliant.

So pro surfing, in theory, seems like it might be one of the first sports to get up and running again because you have a webcast and often, remote locations.

I think. I don’t really know what’s going to happen. Will it clear up in a month and we’ll be able to carry on? Who knows when? I think that’s the hardest part: all the athletes that are traveling. You’re right, we don’t need the fans, we just have the live webcast. But I heard in Australia the borders are closed, a good amount of the tour is from Australia. How are they going to go to an event then go back to families? It’s a world tour so there’s literally surfers from all over the world.

Funny how you were taking the year off then this happened.

Who would have thought? I knew that I needed the year off for myself. It felt right for me at the time. Everyone to some extent, my peers, everyone must feel the exhaustion a little bit. Not to take anything away about how great our lifestyle is, but living out of a suitcase takes a lot. Everyone won’t admit it, but it’s good for people to press the refresh button.

But since everyone’s had a break, would that mean you might compete this year anyway if the season resumes?

We’ll see what happens. I told the WSL team that if they do need an extra person, I’m here. I was planning on competing, doing a couple Challenger events and the Olympics. And with plans being changed, it would be fun to participate in something. I knew this year was going to be a year of perspective no matter what. It just came a lot sooner than I thought. I had a jam-packed schedule. Then I was like ‘woah,’ I miss traveling, I miss putting a jersey on, I miss being on the road with something new to look forward to. I miss all that.

Has it been nice to spend the extra time with family?

It’s been fun. I’m lucky that my husband and I have been together this much and we don’t want to rip each other’s heads off.

I definitely want a family and kids with Luke. It’s tough as a woman, it’s nine months carrying the kid, then you have to heal, take care of the baby. Traveling with the men’s tour, a lot of them are able to travel with newborns and family – as a baby, they’re more dependent on the moms. It’d be pretty cool to do a year or two on tour and be a mom and still do this.

You think Luke could pull off Mr. Mom on tour?

Abso-frickin-lutely, he could do it for sure. It would be fun to do that. It’s fun to see all the women on tour start to grow up and mature: Lakes got married, Tati got engaged, everyone taking on life. 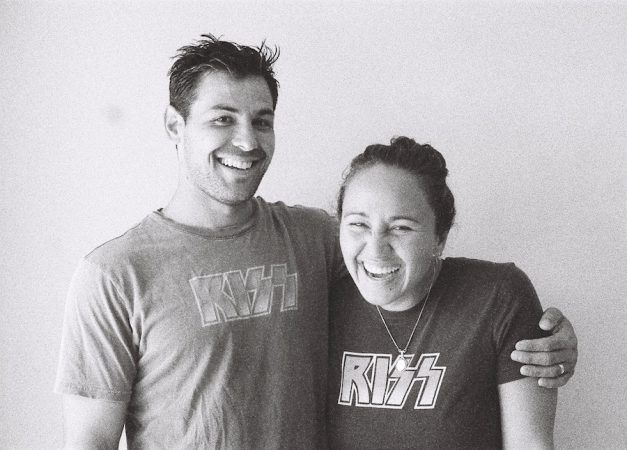 If anyone can play Mr. Mom, this guy can, says CM.

Are there more film projects in your future?

I’m sending so many positive vibes out into the universe. I’d love to do a bigger project and film more. I learned a lot through this project. It’s difficult to find the right mix. You have to be very resilient. You have to keep pushing forward and it’s easy to get defeated. I would love to do more stuff. It was amazing.

One of the coolest parts of the film was what a hard time you had calling yourself a pro surfer.

Yeah, I don’t know. It’s funny to label yourself as something. I feel like there’s a lot of different parts of me as well. I have to pinch myself every day. My office is the ocean and I live a great life. It’s pretty crazy to call yourself a pro surfer.