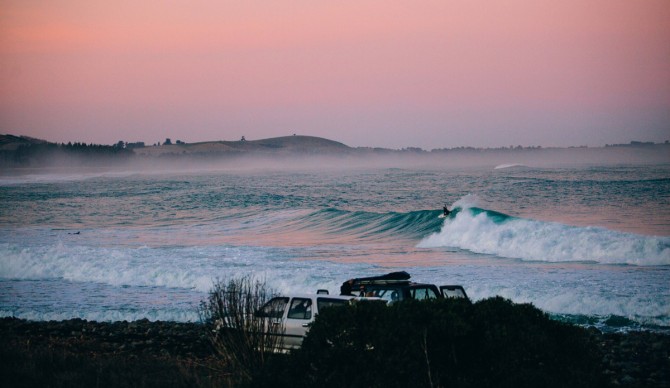 Surfing New Zealand’s South Island is a freezing, albeit satisfying experience. Kiwi surf culture encourages wild escapades and remote journeys because seeking out any one of the island’s many mythical spots requires venturing into the unknown. It’s not a surf destination made for booking flights and catching airport shuttles directly to a packed lineup; at least not the South Island you’ve likely been told about. The crowds are sparse, the roads aren’t always paved, and finding your way to any wave requires some work on the surfer’s behalf.

The entire island isn’t all campfires with Bear Grylls though. South Island does have some popular surf beaches on the front door of its larger cities, so surf trips here can be either hiking three days to a remote location or van-lifing around the city and anything in between. Either way, you can have a truly unique surf experience.

A Tale of Two Coasts

A lot of people would certainly claim the best feature of surfing in NZ is that you can cross from eastern to western coasts in a matter of hours. The land between those coasts is rugged, it’s pristine, and best of all, it’s empty. There are many waves that go unridden thanks to the relatively low concentration of people here. For a surfer, the bicoastal options increase access to virtually any swell or offshore wind.

The drive along the Kaikoura shoreline as you check the surf at Mangamaunu, Meatworks, Kaikoura or Oamaru is stunning. It’s the raw and rugged New Zealand that I love. If things are looking good, it’s easy to pull over for a session in the chilly South Pacific water. Inevitably, you’ll get out and warm up by a campfire after a while. And still watching the waves roll by, you’ll be tempted to get right back out. Getting back into a wet, cold wetsuit while snow is falling on the peaks in the distance is something only the truly devoted can endure.

There is a wide range of surf around the regions of Christchurch and Timaru. Places like the peak-laden beach break of New Brighton to the long, right-hand point of Jack’s are some of the best places for finding quality surf in New Zealand. These are great options for those that are looking for a surf in between other destinations and travels. However, these places don’t offer much of the South Island wilderness that makes New Zealand surfing so iconic.

Through the Otago region, things start getting much more interesting. Despite Dunedin’s cold water, there is a strong local surf scene. Many of the surfers in the area are students who never seem to be at school, so it’s one of the few places where you can expect to see people in the water.

As soon as you head out of Dunedin southbound, the road rejoins the coast and sticks to it for a good 20 kilometers before turning back to Highway 1. The community of Brighton features a break with the exact same name, which is worth checking out if the swell has any south to it. This right-hand point peels along a tiny peninsula and also can create long, enjoyable walls on its day. And despite being just a 20-minute drive from Dunedin, it’s rarely crowded.

The Catlin’s Coast Conservation Park joins the regions of Southland and Otago. It is here you can score uncrowded waves, make beach fires, and sleep outside under the stars. Needless to say, you will need a vehicle in order to discover this area’s full potential and there isn’t much in terms of your typical civilization needs here, so bringing your own supplies is a necessity. It’s Purakaunui Bay that sets the benchmark of a true surf adventure like this. It’s chilly, raw, unpredictable, and incredibly gorgeous. The bay has a lengthy sandbank that generates different peaks between its cliffs, and the northern section will often offer the cleanest lines under its imposing cliffs. The wave itself can look pleasant and small from the outside but actually packs a punch. Besides that, you can expect clean rides with terrific chances of packing a barrel.

In all, surfing New Zealand’s South Island generally consists of three things: amazing natural beauty, miserable weather, and quality uncrowded waves. Despite what mother nature may try and throw at you the rewards far outweigh the challenges. Besides, I couldn’t think of a better place to get neglected by Huey and the surf gods with really good beer, epic road trips, and stunning hikes.