To watch Otto Warmbier sit in a courtroom, pleading for his life, is excruciating. North Korean officials sentenced the 21-year-old American on Wednesday to 15 years of prison and hard labor for attempting to steal a sign from his hotel in Pyongyang, North Korea during a guided trip. In a video of a press conference that occurred after his conviction, Warmbier is frantic. Admitting his guilt, he pounds on the dais, stands to say a prayer, and at times completely breaks down. In a room adorned only with two portraits, one of Kim Jong-il and one of his father Kim Il-sung, the devastation on Warmbier’s face is clear. He slowly and painfully comes to the realize his reality. The whole thing is reminiscent of a Twilight Zone rerun—where a character is nothing more than a victim of circumstances outside of their control. And while North Korea attempts to assert its modernity through encouraging surf and snow tourism, Warmbier’s plight serves as a reminder that: “Oh yeah, this is still North Korea.”

Last December, Kim Jong-un invited three of the world’s top snowboarders, Terje Haakonsen, Dan Liedahl, and Mike Ravelson to tour the country’s $35 million ski resort, Masik Pass. Fearing anti-U.S. sentiment after a hydrogen bomb test, the trio later cancelled their trip. Presumably the invite came as an effort to encourage tourism. The Telegraph reports that a major policy initiative of Kim Jong-un is to increase tourism to two million visitors by 2020. Currently 100,000 tourists make the journey each year. But there are also rumors that North Korea has ambitions to co-host some events for the 2018 Winter Olympics in Pyeongchang, South Korea. 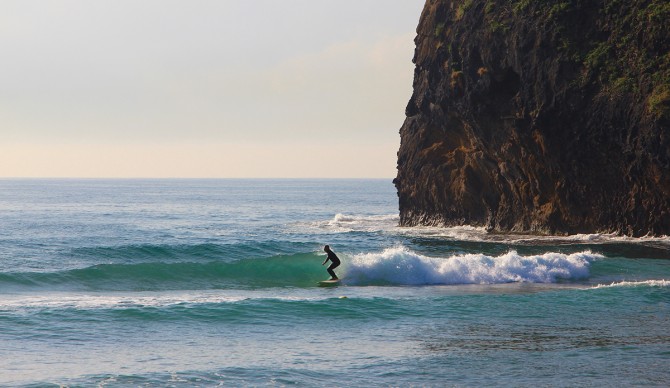 A more peaceful side of North Korea. Photo: SurfNorthKorea.com

Whatever the reason, these efforts demonstrate a North Korean concern with self-image. There is a hidden desire to be perceived among other countries as modern, not backward, and concerned with such pursuits as economic development, and athleticism.

Surf tourism is trending too. Companies like Uri Tours offer guided tours of the beaches of North Korea, and newly constructed beach resorts are doing their best to attract new tourists. But such efforts to appear modern are only skin deep.

Otto Warmbier’s sentencing is just the latest in a string of highly politicized actions that only isolate North Korea further from the rest of the world. The banner that Warmbier is accused of attempting to steal reads: “Let’s arm ourselves strongly with Kim Jong-il patriotism!” U.S. Press Secretary Josh Earnest explained that such actions would not lead to arrest or imprisonment in the United States nor any other country in the world. If not a purely political move, the veneration of former leaders to such a degree that stealing a sign with their name on it would merit 15 years imprisonment is anything but modern.

So how does North Korea expect to encourage tourism, while striking the fear of God into potential visitors? Time will tell. But what’s clear so far is Pyongyang can’t have both.

The bottom line is the propensity of North Korea to politicize cases like that of Warmbier is really a shame. Photos of the coast and mountains depict an incredible natural beauty. But when people are afraid, say, they may never come back from their vacation, that’s a problem.