Not All SUP Surfers are Kooks; Here’s Why 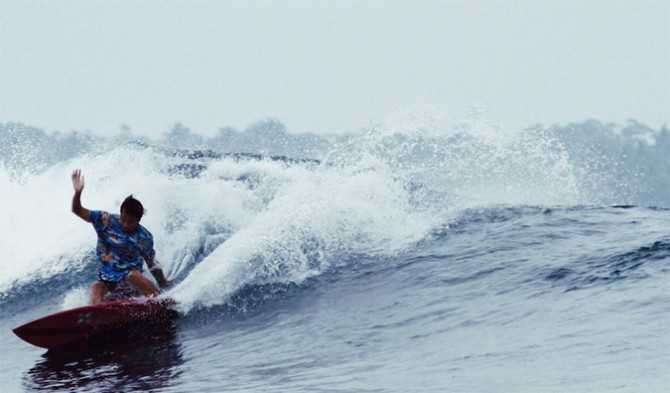 Dave is well qualified to speak on the subject of kookdom.

The SUP kook thing is pretty crazy to me. I grew up on the PCH in Dana Point and my parents owned a shop just over the hill from some of the best surf breaks in Southern California. So I’ve been witness to a lot of different surf craft hate over the years. Stand-up is just the latest one. Growing up, if there were kayaks in the lineup, people hated on em’. My boogie board friends got hated on. Then I did as a longboarder. There’s always that little hate thing in the surf world. SUP is just the newest one, and freshest on everyone’s mind.

But trust me, not every SUP surfer is a kook. In fact, there’s some kids doing some pretty rad stuff. You just have to love surfing to see it.

Surfing, in its purest form, is a minimal sport. And it’s always been about style and being smooth and looking cool. With paddling, there’s obviously more gear. So right off the bat, that’s a strike against it in the cool factor. Then you have guys extend it with even more gear, like booties in summer, a hat. But whatever it is, at end of the day, holding the paddle doesn’t look as aesthetically appealing. 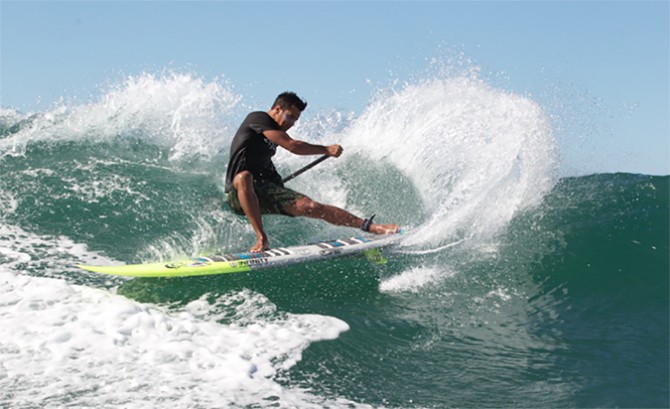 Surfers are like, why do you need that? To the untrained eye, you wouldn’t understand unless you’d paddled outrigger. The leverage and acceleration and intermittent speed the paddle puts in your back pocket for when you need it is really cool.

I’ve seen it happen over and over. People are so worried about something new and they’re trying to protect what they know. And a lot of times people can be really negative and out of line in how they do that. At the beach, in the lineup, or especially, online. It’s not like paddleboarding is meant to take over surfing. It’s another form of surfing. You get bored after doing one thing for so long. The foundation is a love of the ocean and a love of waves. Even the best guys in the world get bored: Kelly rides a weird fish at surf breaks all over the place. So with SUP, I have another means of doing what I want to do and that’s being in the ocean and riding waves.

To me, the best part of the sport is that you ride a bigger board. Your wave count goes up because you can surf all the sections in a lineup and you surf certain waves you wouldn’t have surfed on a surfboard because they’re too small or weird. 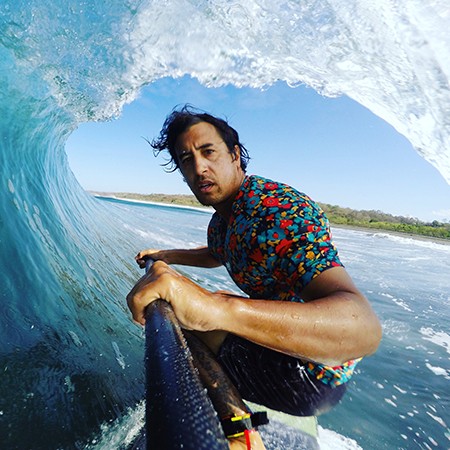 Now, to bring that back to aesthetics and for context, in surfing, what looks good hasn’t changed. You see a good surfer, you can tell. He or she catches the right waves in the right spot and carries speed, and controls that speed well. And it doesn’t have to be a pro level guy anymore. Nowadays, the sport has grown so much, it can be any average Joe who knows how to surf and is in the right spot.

So similarly, good SUP surfing is someone riding fast, carrying a lot of speed, and not forcing anything. They’re taking what the wave is giving instead of trying to force it. They’re in the right spot and taking their turn. It’s a mature approach.

As we get older, our surfing matures and we’re not as concerned with doing the most radical maneuver. Colin McPhillips and Dave Kalama are good examples of that. They’re not overly radical at first glance, but when you break it down, they actually are surfing really radical and technical. Maybe just not as flashy.

But the cool thing in SUP right now is that there’s some young guys that are pushing it and getting flashy. But their surfing is already really mature (that probably says a lot about them as people, too). These young guys can bridge that gap between young and cool, and older and more refined surfers. Two names that come to mind are Mo Freitas and Giorgio Gomez. They surf so clean and really know how to handle themselves in a lineup. They’re just good surfers period. Both surf a SUP like a shortboard. Using rail, they still have that youthful flash, throwing in some airs and tail sliding. They’re breaking down the door into that cool realm that surfing holds so dear.

Hate aside for a second, and being completely objective, if you’re a true surfer, and you know what’s going on and you see Mo or Giorgio surf, there’s no way you could say they suck.

SUP forces you to surf more maturely. Even though they’re getting smaller, the boards are big and still limited. You have to slow down your approach and your mindset. That’s where it separates guys. The guys that are forcing it, I’ll be the first to admit, it doesn’t look right. Guys that aren’t have a mature mindset that improves one’s wave riding. And I guess that goes for any craft, really.

The way I look at it, if you’re an ocean lover and love riding waves, why is SUP surfing kooky? It doesn’t make sense to me. If I’m into that waterman kind of thing, and want to try everything, why would you care? It’s like, this guy rides a 6’0 x 20” shortboard, not a 6’0 x 18”. Are we going to make fun of him, too?

It’s been said a lot but it’s not the equipment. If a guy’s an idiot in the lineup, he’s just an idiot in the lineup. There are plenty of idiots that ride shortboards, longboards, SUP’s, you name it. Just enjoy the ride whatever it may be. For me this morning, it was a 5’4” x 19 1/4” quad. Yew!