Here’s a Very Good Reason to Think Twice About Hitchhiking 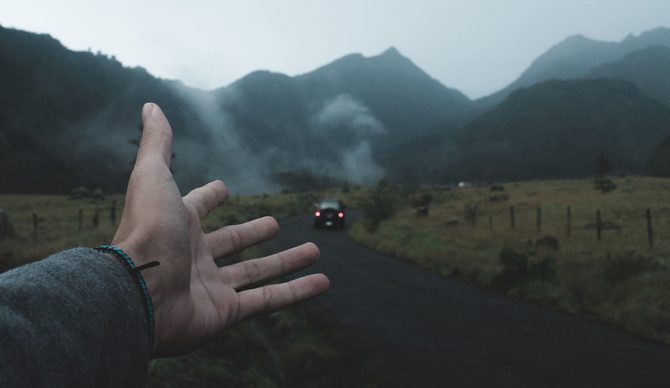 A distant droning alerted him it was time to stick out a thumb. Sure enough, a procession of vehicles appeared around the bend and leading the way was a red truck pulling a long white trailer. The truck flashed its lights at Frans and slowly rolled off the road to where he sat.

‘Big Red’ was painted boldly across the truck’s dragon snout. The passenger window wound itself down as if the truck itself was going to speak to him. But the voice he heard from above was unmistakably human.

“Frans,” he replied, dumping his bag and board behind the seat before finally seeing the fat, smiley face of the driver sitting high up in his captain’s chair, like a king.

“Thanks for the ride”.

“Make yourself comfy, surfer dude.” The man’s voice was rough, much like his physique. Maynard turned his eyes back to the road and pulled out onto it. His beard was dark like his hair, receding back under his cap. He must have been in his late 40s.

“So where you heading?”

“Far as you can take me if that’s okay,” Frans said. “I was hoping to get as far north as possible in the next few days.”

“Sure! Take Maynard’s ticket and enjoy the ride.”

The colorful sunset continued to blaze ahead like a great fire as if the end of the earth was rearing in front of them. After listening to the talk of other truckies, the man spoke again.

“Surfer, aye? Where you from?”

“Uh, from Australia,” Frans stuttered in the silence. “I’ve been in Mexico for the last month or so, now I’m headed to Seattle. I have a friend there.”

“The surf is always good ’round here. Not sure about Mexico. I hear they piss in the water,” Maynard sneered.

Frans feigned a reply and unzipped his backpack, pulling out a map of the West Coast. Craning his neck over it, he traced a finger up the coast of California, joining the dots of every small town and city center he had passed in the last week.

“Are you thirsty? Can I offer you a beer?” Maynard turned revealing a couple large beads of sweat stuck to the side of his face.

“Ah sure,” Frans replied, “are you allowed to carry alcohol?”

“Not really, but I always keep a few in the back here to put me to sleep, when I pull over of course aha!”

Frans smiled, nodded and after learning where the beer was, reached back, cracked the cap and put the bottle to his lips.

“They’re not exactly cold but I picked them up a couple hours ago, so they should still be alright for you, kid.”

The beer was certainly refreshing. Riding along the wide road, feeling its rough texture vibrating through the truck and up through his bones. Frans dropped the empty at his feet just as a message came through the speaker to Maynard:

“Mamma bear comin’ your way, Red.” Sure enough, a few minutes later a police patrol car zoomed past them. The road and the vast green landscape was mesmerizing in the darkening light, and as Frans closed his eyes he could still see the road running like a river behind his eyelids.

Suddenly, he was abruptly woken to a great “FUCK!” from Maynard. He sat straight up, turning to look at him then to the road up ahead. A blockade was set up in of them. There were bright lights flashing in the dark and a couple cars queued awaiting instructions from several police officers. Maynard eased his foot on the brakes but stopped the truck quite a way behind the vehicle in front. Frans quickly wiped away some dribble from the side of his mouth, feeling a bit uneasy, but noticed the nerves had already gotten to Maynard as he rubbed his eyes and muttered.

“Listen, kid,” Maynard stuttered. “This is the end of me. The line’s been drawn. You’re on your own now!”

Frans watched helplessly as Maynard undid his seat belt and flung open the driver door and dashed across the road, over a fence into a tall pine block bordering the roadside. He watched police officers make chase into the forest before a male officer followed by several others with flashlights approached Frans, who was still in the passenger seat. Their hands were on their holsters, but they spoke calmly to him, knowing somehow that he was just a victim of the night. Frans carefully undid his seat belt as he was told and stepped slowly out of the truck’s cabin.

The following hours were full of questions he knew no answers to. He learned that the roadblock was set up not just for testing blood alcohol levels but involved a search for narcotics as well. Inside Maynard’s truck, among pallets of shampoo and hand creams, officers discovered a modified hydroponic setup and a rather large shipment of cannabis. The sergeant had assured Frans that they would catch Maynard soon enough and that the surrounding jurisdictions were being notified of his escape. Frans’ board and bag were brought to him and he was eventually released from the drug bust. Sinking into his cushiony bag again, he gathered himself under the floodlights and rolled another cigarette.

“I can get a couple officers to give you a ride back to Redding if you like?,” the sergeant said as he leaned out the doorway.

It was then Frans decided to hit the highway again. So he trudged out to the edge of the road, leaving the officers to get back to their search and investigation.

Maybe he’d make it all the way up to Oregon tonight, he thought.