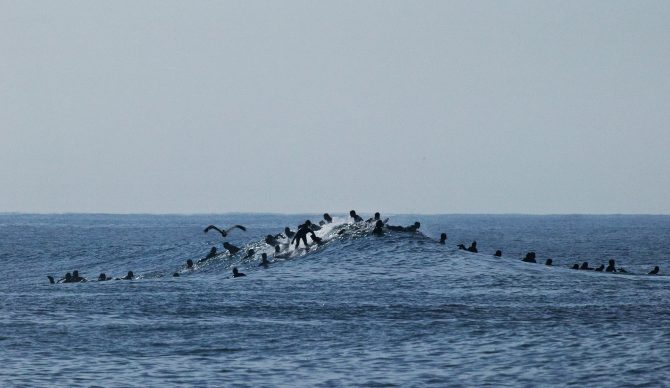 Yes, this should be against the law right now. Photo: JP Van Swae

We’re eerily close to a ban on surfing in California while the world navigates a global pandemic. Typing that sentence is surreal. San Diego was the first domino to fall this week, closing beaches and prohibiting people from entering the water. And a prohibition on surfing in a land that enjoys so many freedoms is just one of the many absurd realities of Coronavirus life in 2020. But this discussion and these crazy circumstances apply to more than just San Diego, and they’re bigger than surfing. It’s sad. Sad because the world is fighting to make sense of all the uncertainty, stress, and loss of loved ones in a crisis. But it’s also sad because the human race is being asked to work together to beat every challenge the spread of COVID-19 presents, at the same time revealing the very people who can’t be counted on, the ones who don’t want to get on board, the ones unwilling to cooperate for a greater good, the ones with enough bravado and ego to give a metaphorical middle finger to what’s a deadly reality for so many.

I’m talking to you. Yes, you surfers, who have at any point in the past two weeks suited up and paddled into a lineup where even one other human also endeavored to ride a wave. You’re acting like a petulant, stubborn, and now willfully ignorant child. You are the problem. Stop it.

When Governor Gavin Newsom rolled out his original stay-at-home order on March 19, he said getting exercise and enjoying the outdoors were conditionally acceptable. The stay-at-home order allows enough space for the responsible members of society to put the pieces together: get some sun, get some exercise, go for a run, just don’t disrupt our now universal practice of social distancing. A practice meant to shutter a highly-contagious virus.

Sure, the CDC was pretty explicit from the get-go that no evidence suggested the novel Coronavirus could spread through saltwater or chlorinated pools, so it’s easy to see the rationalization that surfing, by extension, can remain intact in the face of COVID-19. It’s fascinating how quickly a global pandemic reminded me you can rarely trust the masses to think or act rationally, even when you spoon feed them facts. Lineups and beaches up and down the state were packed last weekend, and a gander at your favorite forecasting site’s cameras showed enough surfers disregarded what was requested of them, huddling together at popular waves, effectively ruining it for the rest of us.

“But surfing is a solo activity. By nature, we want to socially distance in the ocean anyway. Surfing is essential to my wellbeing and good health…” Yada yada…

I’ve heard and read all your obnoxious platitudes about surfing being a magical saltwater cure-all and your countless defenses of surfing as if the world isn’t fighting a pandemic where the number one way to diminish spread (and death) hasn’t already been repeated ad nauseam. Let’s stop pretending finding waves in most of the Golden State wasn’t already synonymous with sitting shoulder-to-shoulder in a pack of people, jockeying for position when a wave approaches and being close enough to slyly tug on the leash of the stranger next to you. This weekend was evidence enough that surfing in California really isn’t conducive to social distancing.

Personally, I didn’t need a national emergency to learn surfing in solitude is mostly an idea in California, not a reality. You didn’t either, you’re just being coy right now. It is in many fundamental ways very different from hiking or running or riding bikes, activities in which movement allows people to easily keep their space and the common decency of stepping aside remains intact when another person approaches. Even so, some of those activities are being limited because, guess what, so many people are doing them at once. If surfing truly was a risk-averse activity in this time, San Diegans wouldn’t now face jail or a $1,000 fine to do it. So let surfing’s fall be an example of the cooperation we need in order to hang on to as much normalcy as possible in this time.

Still, a petition is being passed around to “Open the Ocean Back Up to San Diego Surfers” by a group of people who collectively took less than a week to fail its first test. Not all of the people who signed that petition contributed to the crowds. But accept your fate. The rest of you already blew it. You piled into any lineup with a camera pointed at it, rationalizing your defiance with the evidence that others were doing it too. In our simple little pursuit, that just meant don’t get in the water if other people were already there. I grew up near Santa Cruz, where it’s common to pull up to a wave along Westcliff Drive, see two people already in the water, and know adding another body to the pack is rude. So you pass. You leave and wait. You go somewhere else, not because you want a wave to yourself as much as a courtesy to others. I’ve exercised that restraint muscle and can tell you how and why it atrophies in Southern California. It makes me want to hold up a copy of Manhattan Beach’s newly-adopted ordinance that prohibits gatherings of two people or more, righteously wag my finger, and say, “This is why we can’t have nice things.” There’s a reason the world looks at now-infamous Florida Spring Breaker in awe and frustration. Your actions have been no different and, reality check, your pictures will sit side-by-side in the history books.

“But this is my right. You can’t take that from me,” you’re screaming.

How very American of you.

But let’s be real, you didn’t flock to places like Trestles the past two weeks because it’s your right. You did it out of defiance for both common sense and refusal of a direct request. Own up to that. You did it out of neglect. You did it because you think your circumstances exclude you from a responsibility many are taking on in several aspects of daily life. People are dying. People have lost jobs. Nurses and doctors are sleeping away from their families to avoid risking their loved one’s health. But you argue the injustice is being threatened with a ticket to surf the north side of Oceanside Pier with friends. If anybody’s violated the rights of another it’s you. A person with character and integrity can look in the mirror, acknowledge what’s directed their choices, own their mistakes, and resolve to do better tomorrow. A person who lacks either is the person already drafting a rebuttal.

“But I need a daily paddle for my sanity,” you’ve pleaded.

No, you don’t. Stop fooling yourself.

Humans are often limited by their insistence to hold onto something cherished, but the profound irony is we’re actually empowered by our capacity to let those very things go. Like I said, this applies to more than just riding waves right now. It’s about everything we have a duty to resist or be aware of through a now indefinite amount of time. Surfing is an activity — a life-shaping, enjoyable one worthy of time, curiosity, and exploration— but it’s still just an act, and never your identity. No matter how deeply it’s impacted you. Acknowledging where you stand between the two will heavily inform (or reveal) your ability to set it aside for this moment. Surfing is never a true need, never a requirement for sustaining life, it’s at most a very deep-seated and understandable want. Know this and I promise you, you’ll appreciate it more when we get to the other side. Something about our culture likes to reward that kind of bravado, though; the kind that embellishes irrational attachment to time in the ocean. It grasps onto manufactured stereotypes of defiance and rebellion and proudly shoots itself in the foot with them over and over. It validates those who hang onto an idea that the more they shout their dedication to surfing, the more platitudes they use about it being a religion, the more enlightened they’ve become.

I’ve made my fair share of life choices based on how close they’d keep me to the ocean, so I do get it. We’re all going stir crazy. Since the World Health Organization declared this a pandemic, stories of acts of kindness between strangers have reaffirmed my already deep faith in mankind. Then I watch a slight touch of south bring 50 people to Topanga at once. I’ve been tempted to spend Friday nights drinking whiskey at home with friends or afternoons finding waves, but the funny thing about abstaining from temptation versus giving into it right now is the former isn’t a health hazard to the human race.

So thank you to everybody who’s giving up something they love for a greater good. That’s invaluable. That’s encouraging. We need you. I owe you a wave. Keep leading by example and encouraging others to be just as accountable. That’ll get us back to slapping high fives in the parking lot sooner.

Editor’s Note: Ironically, as The Inertia’s Community Editor, Juan will happily accept your thoughtful “In Defense of Coronavirus Surfing” rebuttal and help publish it on our site. Please send any contributions to contribute@theinertia.com.