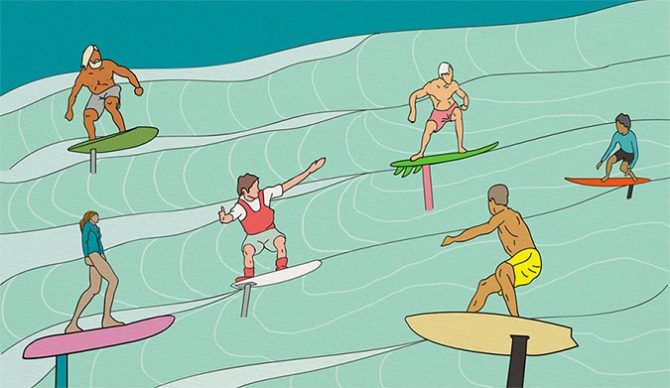 It’s doubtful that lineups near you will ever look like this. Art: Sean Bernhardt

They say it’s like flying. That it feels like the first time you ever caught a wave. That it makes the worst days of surfing feel like the best of days in Indo.

With fawning statements like that coming from the likes of John John Florence, Dusty Payne, Jamie O’Brien, Dave Kalama, and recent performances like Kai Lenny’s mind-bending crossing of the Channel of Bones in the 2018 Molokai2Oahu race in under three hours, foiling is square in the oceanic spotlight and doesn’t look like it’s going anywhere. And if your Instagram feed is anything like mine, there seem to be new folks going #loyaltothefoil every day.

Some converts go as far as to claim that foiling is the future of wave riding because it allows you to surf anywhere (boat wakes in Michigan, downwind bumps in the Puget Sound, river waves) on any bit of liquid energy. Both surf and SUP brands like Patagonia, Hurley, Naish, Starboard and many more are all trying to cash in on the new market segment. It’s the new SUP.

But I’d argue that foiling’s economic growth is limited.

First of all, foiling is hard. Even towing behind a boat (which is what foil converts suggest you do first) and getting the thing at flying level is a real challenge. Then you take it to a surf zone. Even for the best surfers, it’s a scary proposition because as you try to turn it like a normal board, the foil can come flying out at you like a wayward tomahawk. Learning to pop up, lift off, stay centered and actually surf a wave on a foil is something reserved for experienced wave riders only.

Lenny—the poster boy for foiling and the man at the tip of the spear in terms of performance—agrees.

“(The difference) between SUP and foiling is like the difference of bicycle to motorcycle,” he says. “Not everyone is going to ride a motorcycle in their life. I see foiling more on an extreme side of the spectrum.”

Lenny says the overall audience is limited, but there’s still growth to be had in the category.

“If you’re a surfer it should fit into your quiver whether you use it occasionally or all the time,” he says. “What makes it unique and will give it staying power is the fact that it’s probably the most high-performance sport in the water for terrible conditions. For that reason alone, I don’t think it’s going anywhere…but I don’t see it becoming this massive sport.”

Speaking of quivers, you’re looking at least $1,000 just to get your first mast and wings. Then there are different length masts and different wings for a variety of conditions. So you’re staring at a whole new quiver—and that doesn’t include the different and quickly-developing boards that you’ll need. Again, this puts the sport in the realm of the serious surfer or paddler (and the wealthy).

Pat Towersey, director of energy marketing for Hurley, who was an early adopter of foiling and a member of the West Coast Foil Club with the Hurley brothers, agrees but sees potential for the sport in the beginner market.

“I think you could easily make a beginner foil setup that could make (foiling) super easy to get into,” he says. “Surfing (early on in its history) seemed so hard and unapproachable and now it’s super normal. Maybe it won’t have the mass appeal of surfing but I think it will have a lot of applications beyond waves. I think there’s a lot of room for growth.”

But there’s another reason that foiling’s commercial growth will be limited: when you watch it on video or see it in a photo, it doesn’t look like much (seeing it in person, the speed that foilers carry is baffling). The same could be said of surfing, but riding a wave on traditional craft is a little easier to understand for your average person as far as the eye test goes.

Gliding silently over the water at speeds much higher than on a planing surfboard is an amazing feeling, but it looks like someone is doing the Huntington hop in horrible waves. Which they generally are. It feels cool, but it doesn’t look all that rad as riders bounce up and down trying to maintain speed– not the type of thing that’s going to sell in malls in middle America. Surfers might put them in their quivers, but Costco selling Wavestorm foils? Not happening.

But Robert Stehlik, founder of Blue Planet Surf on Oahu and a foil and board manufacturer, says he has been surprised by the growth of the sport.

“I never really expected it to be a big market but then every time we brought something new in the demand was just crazy,” Stehlik says. “Anybody that SUP surfs wants to try it or have it in their quiver to do it. It’s not as niche as I thought.”

Stehlik says there are lessons for foiling in the current state of the SUP industry. Standup paddling was, of course, touted as the next big thing. You still see it everywhere. Boards are still carried at Sportsman’s Warehouse, Dick’s and Sam’s Club. Twelve-footers continue to decorate cars roofs in middle America; celebrities like Martin Short can still be seen standing on a SUP on the cover of Vanity Fair, but the core of the industry has reached a plateau. Why? All of the easily converted surfers, kayakers and windsurfers already have boards and the average user doesn’t buy a new board every year. SUPs are now part of the quiver—and industry growth has slowed to a standstill. I’d venture to guess that foiling will follow a similar trajectory, with that one important distinction: foiling is much harder to learn than stand-up paddling.

Taking flight has never been more apropos🦅✈️. Sending out all these beauties on a plane, so you can fly at home. They’re flying out the door quick, so if you’re interested in a foil board or foil, go to our website blueplanetsurf.com or call the shop. Free shipping to nearest major airport with “online package.” #blueplanetsurf #flyinghigh #learningtofly #findparadise #foilboard #foiling #weouthere #choices #newnew #townbusiness #hawaii #aloha #808 #supfoil #suplife

“Anyone can learn to SUP,” says Stehlik. “Foiling takes some skill and knowledge; you (must) know how to surf before you learn how to foil. So the overall growth (potential) is pretty limited.”

But for the time being, he sees it as a great place to be as the market surges.

“I think foiling has the potential to become a very solid sport,” he says. “But I don’t think it will ever take over stand-up paddling.”

“It’s like a drug. You’ll spend anything to get it,” says Towersey. “The equipment is developing so quickly that a lot of downstream selling of old foils will create an access point for new users. Then they’ll want to get in tune with the better equipment.”

Eventually, though, that development will plateau.

Being at the forefront of a new sport is exciting for anyone, and you can’t blame the #loyaltothefoil crew for preaching from the top of their wings. So while the sport opens up a whole new way to ride waves, downwind bumps, and open-ocean swells, foiling’s growth will be stunted from the get-go. You’ll definitely see them out in the water and on your Instagram feed. But they probably won’t be taking over the lineup.