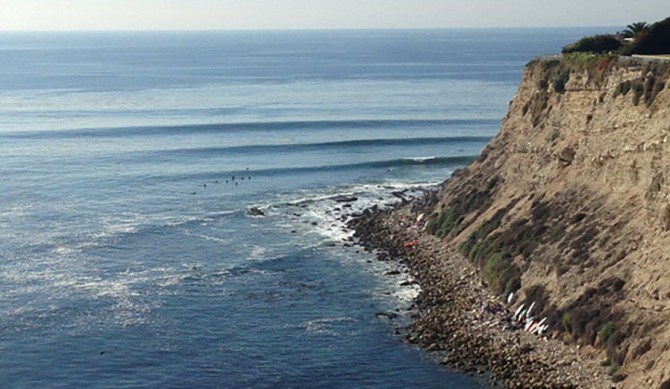 Lunada Bay: The wave that created the controversy. Photo: Levin

As a local resident, I feel the entire Bay Boys situation is completely blown out of proportion and does not warrant national attention by the media. I hike down to the Bay Boys’ surf shack often with my kids, and I have NEVER had any problems with any of the surfers there.

The idea that they are being classified as a “gang” is absolutely ridiculous. Just because a group of surfers congregate to surf when the waves are good does NOT classify them as a “gang.” I congregate with a running club and hit the PV trails with aggression. Are we a gang? Cyclists congregate at Malaga Cove by the hundreds on the weekends and take over the streets and blow the stops signs and other traffic violations. Are they a gang? How about a group of teenagers that gather to play basketball in Compton every day? Maybe they won’t let you play on “their” court. Are they a gang? What about a group that gathers at the bowling alley, guzzles beer, and yells profanities while bowling? Perhaps the old guys from the Haggarty’s Surf Club should be called a gang. Let’s get real.

The troublemakers should be cited and/or arrested for their behavior. But, what last week’s class-action lawsuit will do is open up the floodgates for others to file frivolous lawsuits up and down the coast when they feel offended or “threatened” by other surfers. More people will jump on the band wagon claiming they were wronged. If they can’t get any money out of the surfers, I assure you they will go after the city for “condoning.” Anything to make an easy buck. I doubt that would be a happy song the Beach Boys would write about. It’s Palos Verdes and everyone is looking to make an easy buck.

I have used the Bay Boys’ surf shack to barbeque with my kids and I have slept there overnight to listen to the waves. It is NOT a fort. The Bay Boys have loaned my kids and I their kayaks, and even offered some of their old boards to surf with.

It would be a true shame if the surf shack were torn down as many hikers use it as a resting place. Tearing it down will not accomplish anything. It may even cause serious erosion to the cliff above if it is torn down. Just cite, arrest or fine the few troublemakers. Most of the surfers who gather there are law abiding citizens who come to surf the point. I am certain there are much bigger problems in this city than surfers being belligerent and not sharing waves. Tax payers’ money might be best used in stopping the rash of burglaries in the area.

I have surfed in Malibu, Rincon, Swamis, Trestles, Rat Beach, San Onofre, Hanalei Bay and other locations. Believe me, when the surf is big, it becomes very competitive anywhere.

I’ve had bottles placed under my tires in Malibu and writing on my windshield with surfboard wax. I didn’t go crying to the police or file a lawsuit.

True, the behavior is sophomoric and moronic. You will often be told to get out of the way or stay off the beach if you are not skilled enough because you may kill someone with your board when the surf is big. It’s like that everywhere. If you were just a beginner at skiing and decided you were going to take a double black diamond run on Mammoth Mountain, do think other skiers would be yelling at you? Of course they would! They would tell you to get off the mountain before you kill someone. Most likely that is what is occurring when the surf is huge. But, if someone is throwing rocks at other surfers, then that is different. By all means they should be arrested.

This lawsuit will only create an opportunity for more lawsuits from Santa Cruz to San Diego by attorneys digging for gold. There will be people complaining that they were verbally heckled, or they felt excluded. The reason this is such a circus is the close proximity to L.A., a city with about 10 million people and lots of media. The great swells only last about four months, so the competition for the lineup is tough. Just round up the few troublemakers and put an end to this circus.

Waves have been coming to Palos Verdes for over 16 million years when it was an island, and they will continue to come. They will always come. The waves to share are plentiful.

Frank Ponce is a resident of Palos Verdes Estates. His op-ed originally appeared in the Palos Verdes Peninsula News and has been republished with permission.