Opinion: Why Hating on Wavestorms Is Sad 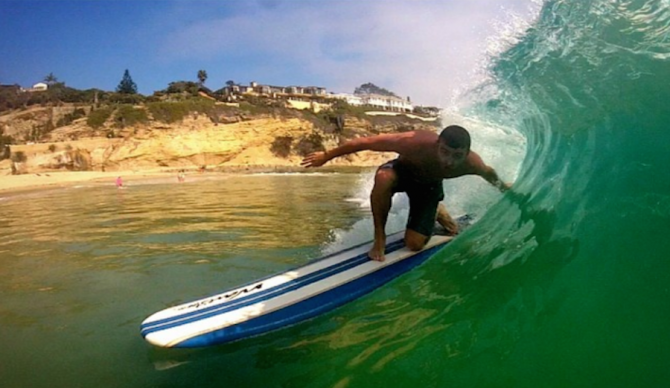 P Highlighting people ripping on Wavestorms produced considerable backlash on Instagram. Maybe it’s time not to be so insecure.

Just this weekend we launched an Instagram takeover in collaboration with Team Wavestorm. If you blinked you might have missed it. The takeover concluded with a giveaway – a free Wavestorm, a t-shirt, and a GoPro mount. In addition to the hordes of stoked people hoping to get a free board commenting on the posts, there was a contingent of sour, salty folks that were quick with their thumbs to express their discontent.

“Are you guys serious @theinertia?” chimed one.

“Wow, this endorsement is sad,” chirped another.

Some longer form comments were more specific about their disapproval claiming that Wavestorms were bad for the environment, likely used child labor during production, were putting hardworking blue-collar shapers out of business, were perceived by users as a hall pass to be a wave hog, etc., etc.

First and foremost, the discontent appears to have been stoked by a complete misunderstanding, and the fact that it needs to be explained is sad. Team Wavestorm is an Instagram account run by an individual for shits. It’s not Wavestorm’s corporate account. A single click over to their page would have revealed that.

And the takeover had nothing to do with corporate sponsorship. We thought the account was doing something worthwhile – highlighting people having a great time whilst throwing public perception to the wind. Period.

But the fact that among the haters that descended in droves were a handful of respected individuals in surf, resident cool guys, and not just trolls, highlights how flawed arguments can be institutionalized to reinforce what’s considered cool and what’s not. Especially these days when surfing promotes itself as being more open-minded to a variety of craft, the backlash regarding a handful of photos and a giveaway shows otherwise. To summarize one comment, the surf world is all for having fun and riding anything, just don’t ride a Wavestorm.

The hypocrisy is fucking startling. And it’s worth taking each of the arguments in stride.

One commenter argued that instead of plugging Wavestorms, it’d be wise to plug an all-American brand. There’s a point to be made, sure, that businesses in the United States are subject to a stricter regulatory framework. It’s therefore compulsory to pollute less than in, say, Taiwan (where Wavestorms are produced), and to pay workers minimum wage. That logic is all well and good if it’s applied universally.

I suspect that an Instagram takeover in collaboration with Firewire, though, whose production facilities are in Thailand, would fail to draw similar levels of disgust. Child labor is equally present in both Thailand and China.

The underlying logic is that if it’s made somewhere else, it must not be made as well. Mass production = poor quality, in other words. But major brands from Channel Islands to Rusty use CNC machines to speed up production. So mass production happens equally in the US.

The bottom line is Wavestorms represent an easy target because they’re sold at a big box store (Costco), and their customer base is predominantly the beginner. Wavestorms strike a nerve by exposing the fragility of cool in surf. Which seems to be the true issue here.

Putting Shapers and Surf Shops Out of Business

The claim that Wavestorms are putting either shapers or surf shops out of business has to be one of the craziest claims of them all, and shapers who make it are belittling their craft. No serious surfer is debating between a 6’4″ high performance thruster and a Wavestorm to take to Indo. In terms of performance, the former is clearly superior. Anyone considering buying a Wavestorm is either looking to add one to their quiver for fun, not-so-serious surfing, or it’s their first surfboard. In neither case is a custom board made by your local shaper in competition with a foamie.

What’s more, people who are shopping for surf equipment at Costco and Costco alone would probably otherwise never set foot inside a surf shop. In this case, though, after gaining some experience in the water they might – which bodes well for shops in the long run, and shapers too if beginners transition over to regular surfboards. Online retailers are more likely the reason brick and mortar surf shops are dying out, not the advent of Wavestorms being sold at Costco.

Perhaps the argument against the Wavestorm that holds the most weight is the one that claims their production has an adverse environmental impact. There are a few ways to assess this. For one, it’s clear that the production of foam in any capacity – whether to eventually be encased in a fiberglass shell, or not – is not “green.” But there is little evidence to suggest that a single Wavestorm surfboard is any worse for the environment than a traditional poly board. Any surfboard is bad for the environment, because no surfboard is 100% sustainable. I’m all for pushing for more sustainable craft. Hell, it’s imperative. But selective application of logic for the purposes of masking an agenda that falsely demonizes the beginner, the surfing masses, and big box retailers without looking in the mirror to see that we’re just as bad is not the solution, it’s part of the problem.

To be clear, this is not an endorsement in any way of AGIT Global, the company that produces Wavestorms, or the Wavestorm itself. It’d be idiotic to claim that the product is environmentally friendly, sustainable, or even seek to disprove the company uses child labor (which I can’t, though there is no evidence for the claim either, and child labor is illegal in China). It’s just important to point out when so-called crusaders for the environment, hip surfers who promulgate a “ride anything” attitude, or even local shapers spew hate all over something that is very much in the spirit of what they represent.

The reality is the popularity of the Wavestorm challenges what’s cool. Being so up in arms about it is what’s really sad.