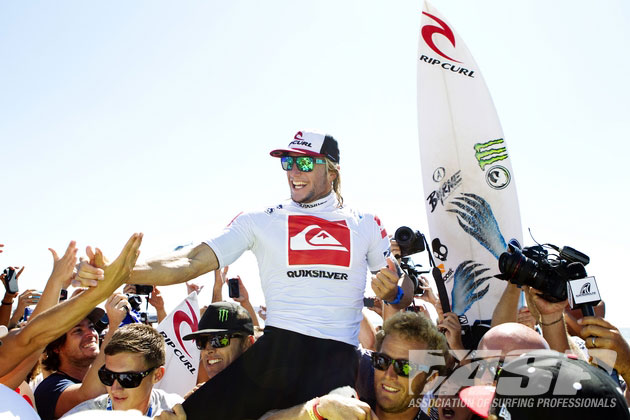 When it was first announced that New York and San Francisco were going to host contests on this year’s World Tour, a lot of surfers called foul.The inclusion of urban locations, with such temperamental waves, seemed like an all-too-obvious pandering to corporate interests at the expense of quality waves.

After the mind-blowing conditions in Teahupoo, it seemed like there was no way New York could do the World Tour justice, but Mother Nature cooperated and sent Long Island prime hurricane waves for the final day of competitions, making for a Slater/Wright rematch: a near-perfect competitive narrative in the Big Apple.

So what about the winner himself? I had the chance to speak with Owen Wright, heir to the biggest prize purse in competitive surfing, a few days after his big win in New York, and here’s what he had to say.

How has New York been treating you since the win?

It’s been a great couple of days in the city doing a bit of partying and celebrating. I’ve been checking out all the scenes and having a great time. Even before the contest, I was here exploring the city, and I was blown away by everything that there is to offer here. Having a surf contest in the city… well, it definitely doesn’t feel like you’re just waiting for your heat to start like in other contests. Here you can have a great time between heats as well, so a lot of the guys were off to check out the city if they weren’t surfing.

What about the critics out there who looked at a place like New York and don’t see it as a wave magnet, like a place like Teahupoo?

The thing is, people say that Teahupoo is a wave magnet, but it’s been really average the last 5 years for the contest. This year, well that was a different story. It was the best contest I’ve ever surfed. But it’s not always that way. We came to New York where it’s not really known for good waves, and we got some great left-hand, almost point break-type waves. 5 or 6 turns long, and it blew everyone’s mind. It all depends on whether or not you get swell. And we got it here. I think it’s a great thing for surfing to have some events in big cities, to really boost the sport’s profile. I think even if there were marginal waves in New York, I definitely would have gone into the city to check it out. We might have gotten average waves, and I might have gotten an average result. But I keep looking at competitions in the past. We’ve gone to Teahupoo I don’t know how many times, and haven’t scored. Thankfully, this year we did. And we did here in New York, too. I know that all the guys were just as happy with both events. It really depends on whether or not we get waves.

It must have been particularly special to final against Slater, again, and this time to win. Talk me through what that was like.

Having two finals in a row against Kelly has been a great opportunity. Truth is, just to surf against him at all is a great opportunity. To final in Teahupoo, which is my favorite wave, and to keep it close, that itself was great. And then to have a re-match the very next week was basically a dream come true. There was no way I was gonna let it slip me by twice in a row, so I definitely drew inspiration from the final before.

Thanks Owen, and congrats. See you in San Francisco.

Absolutely. Looking forward to it. I hope there are waves.