Panamanian Exploration: The Deeper You Go, The Better it Gets 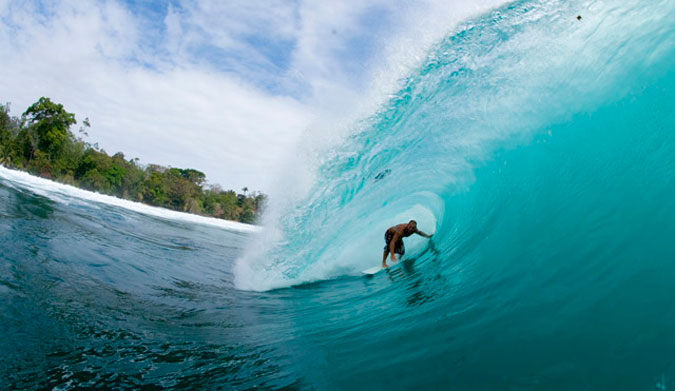 Hiding from the Panama sun.

I’ve always found Panama interesting. Living in Costa Rica for several years, I never understood why Panama wasn’t as developed as its northern neighbor, in terms of tourism—especially surf tourism. Last May, I decided to cross the border into Panama in search of something new.

Panama is a diverse country. On one side of the spectrum, it’s very modern. Nearly a century of American influence and presence around the cities and canal has fostered a hybridization of Panamanian and American culture. For example, contrary to the rest of Central America, baseball is the national sport. Additionally, modern medical practices, paved roads, new cars, and high-rise buildings in the capital (Panama City) could easily be mistaken for, say, Miami or even Dubai.

Once you leave the urban areas, the authentic part of the country begins. Covered in thick jungle and rainforest, with caballitos–the county’s version of cowboys–running free, riding their horses and leading their herds. Real farmers, that go out in any weather. If it’s 40 celsius or pouring rain, they will wear jeans and boots, with a machete in their belt, a baseball hat on the head and a big smile. I met many of them on my travels in Panama; they’re always the happiest people around. I can only assume that this is how Costa Rica was 20 years ago, long before every corner and piece of land became an hotel or an attraction for foreign tourists.

But travel around Panama isn’t easy. Panama is a very long, and each trip in it can take hours of driving. Modern road construction and public transportation, especially outside the main cities, is unorganized, and even a simple ride can take half day. And surfing is even harder. On one hand, Panama gets the same swell as Costa Rica and Nicaragua, and on the other there is no surf. We all know Bocas Del Toro, but the surf season there is just 2-3 months a year, and there’s Santa Catalina and Venao, with good surf but very expensive accommodation and groceries, and that’s it. Apart maybe three shapers in the country, the surf in Panama is barely exists. There are no surf shops, it’s hard to find surf gear, and the national surf team suffers from nepotism, mismanagement and lack of professionalism.

I came to Panama searching for new places, and it was tiring. I moved between many buses, hitchhiked a lot, walked many miles, sometimes under heavy rain, with all my surfboards and gear, food and water jugs, hoping that it would last as many days as I thought it would. Of course, sometimes it didn’t (and thank you earth for supplying me with fresh coconuts and mangos right from the tree). I did all that just to get to remote beaches, with no transportation, groceries, or accommodation available on site. But although I found beaches with heavy beach breaks, perfect A-frames, and long river mouth breaks, something was still wrong. The swell quality was not as good as the surf I know in Costa Rica or Nicaragua, and maybe that was the problem. I met many people, local and foreign, that been in the country for many years, and they all gave reasons for the low quality of the surf at the time, but also showed me on the map and on videos some of them took many other breaks in Panama, that are accessible only by boat. To be honest, it didn’t chang much for me, because I already found my spot in Panama. And maybe the waves weren’t that good, but the most crowded I surfed it was five people in the water, and it was worth it! For now, I’m keeping those spots to myself, but anyone can find them. You just need to ask the locals, search a bit and get off the track and travel for real, not just go with the flow.

In short, if you want to surf Panama you need more than just time. You also need money, camping gear, 4×4 truck and a boat, but even if you can’t have it all, or if the surf is not as it best, surfing uncrowded waves in a beautiful country is a privilege with no price tag on it.